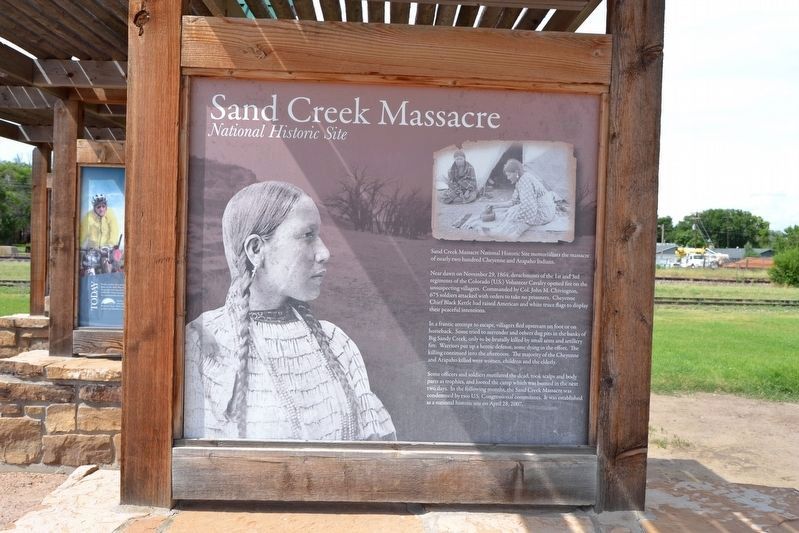 Near dawn on November 29, 1864, detachments of the 1st and 3rd regiments of the Colorado (U.S.) Volunteer Cavalry opened fire on the unsuspecting villagers. Commanded by Col. John M. Chivington, 675 soldiers attacked with orders to take no prisoners. Cheyenne Chief Black Kettle had raised American and white truce flags to display their peaceful intentions.

In a frantic attempt to escape, villagers fled upstream on foot or on horseback. Some tried to surrender and others dug pits in the banks of Big Sandy Creek, only to be brutally killed by small arms and artillery fire. Warriors put up a heroic defense, some dying in the effort. The killing continued into the afternoon. The majority of the Cheyenne and Arapaho killed were women, children and the elderly.

Some officers and soldiers mutilated the dead, took scalps and body parts as trophies, and looted the camp which was burned in the next two days. In the following 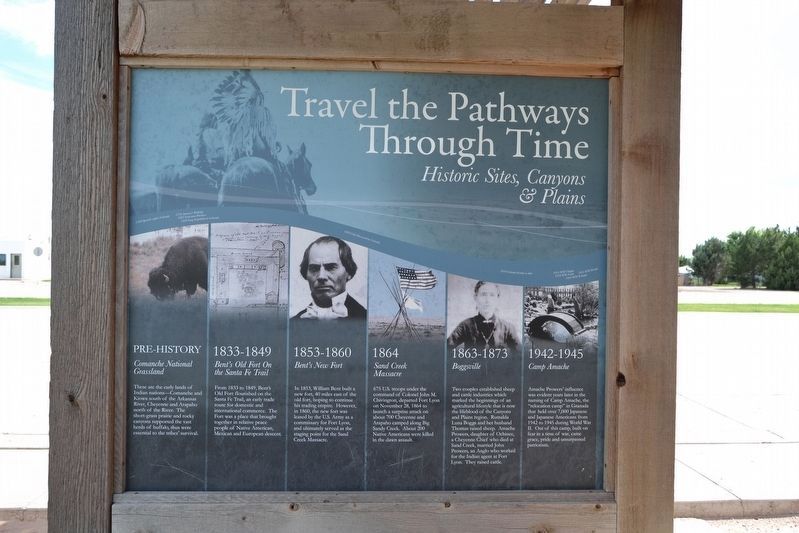 By Duane Hall, July 15, 2017
2. Eads Roadside Park Exhibit
Travel the Pathways Through Time
months, the Sand Creek Massacre was condemned by two U.S. Congressional committees. It was established as a national historic site on April 28, 2007.

Pre-History
Comanche National Grassland
These are the early lands of Indian nations—Comanche and Iowa south of the Arkansas River, Cheyenne and Arapaho north of the River. The short-grass prairie and rocky canyons supported the vast herds of buffalo, thus were essential to the tribes’ survival.

1853 - 1860
Bent’s New Fort
In 1853, William Bent built a new fort, 40 miles east of the old fort, hoping to continue his trading empire. However, in 1860, the new fort was leased by the U.S. Army as a commissary for Fort Lyon, and ultimately served as the staging point for the Sand Creek Massacre. 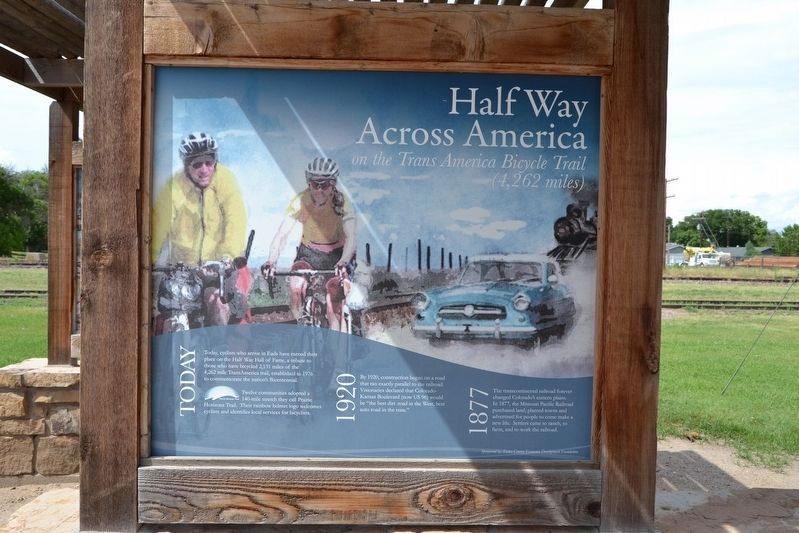 By Duane Hall, July 15, 2017
3. Eads Roadside Park Exhibit
Halfway Across America
a surprise attack on about 700 Cheyenne and Arapaho camped along Big Sandy Creek. About 200 Native Americans were killed in the dawn assault.

1863 - 1873
Boggsville
Two couples established sheep and cattle industries which marked the beginnings of an agricultural lifestyle that is now the lifeblood of the Canyons and Plains region. Rumalda Luna Boggs and her husband Thomas raised sheep. Amache Prowers, daughter of Ochinee, a Cheyenne Chief who died at Sand Creek, married John Prowers, an Anglo who worked for the Indian agent at Fort Lyon. They raised cattle.

1942 - 1945
Camp Amache
Amache Prowers’ influence was evident years later in the naming of Camp Amache, the “relocation camp” in Granada that held over 7,000 Japanese and Japanese Americans from 1942 to 1945 during World War II. Out of this camp, built on fear in a time of war, came grace, pride and unsurpassed patriotism.

Half Way Across America
on the Trans America Bicycle Trail (4,262 miles)

Today
Today, cyclists who arrive in Eads have earned their place on the Half Way Hall of Fame, a tribute to those who have bicycled 2,131 miles of the 4,262 mile TransAmerica trail, established in 1976 to commemorate the nation’s Bicentennial. Twelve communities adopted a 140-mile stretch they call Prairie Horizons Trail. 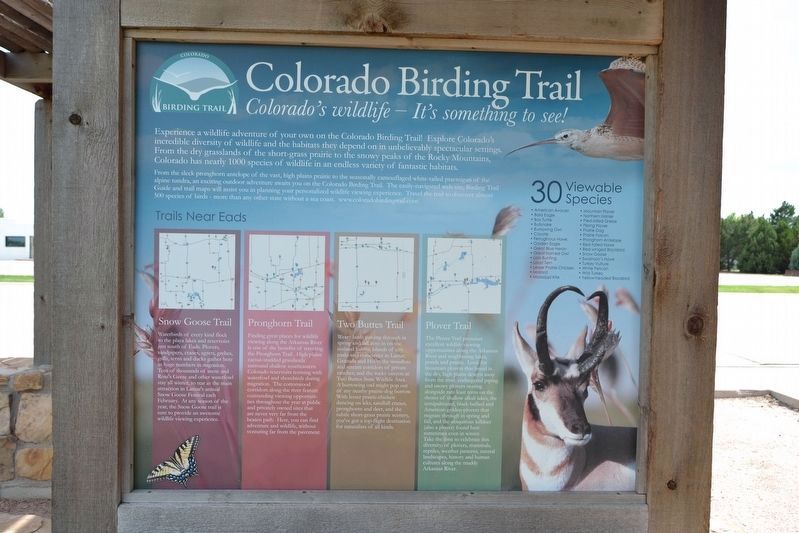 1920
By 1920, construction began on a road that ran exactly parallel to the railroad. Visionaries declared that Colorado-Kansas Boulevard (now US 96) would be “the best dirt road in the West, best auto road in the state.”

1877
The transcontinental railroad forever changed Colorado’s eastern plains. In 1877, the Missouri Pacific Railroad purchased land, planted towns and advertised for people to come make a new life. Settlers came to ranch, to farm, and to work the railroad.

Experience a wildlife adventure of your own on the Colorado Birding Trail! Explore Colorado’s incredible diversity of wildlife and the habitats they depend on in unbelievably spectacular settings. From the dry grasslands of the short-grass prairie to the snowy peaks of the Rocky Mountains, Colorado has nearly 1000 species of wildlife in an endless variety of fantastic habitats.

From the sleek pronghorn antelope of the vast, high plains prairie to the seasonally camouflaged white-tailed ptarmigan of the alpine tundra, an exciting outdoor adventure awaits you on the Colorado Birding Trail. The easily-navigated web site, Birding Trail Guide and trail maps 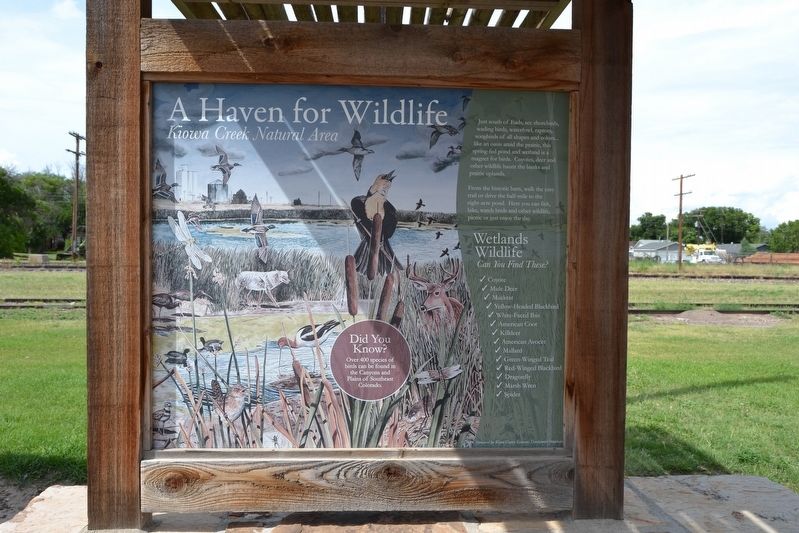 By Duane Hall, July 15, 2017
5. Eads Roadside Park Exhibit
A Haven for Wildlife
will assist you in planning your personalized wildlife viewing experience. Travel the trail to discover almost 500 species of birds - more than any other state without a sea coast. www.coloradobirdingtrail.com

Snow Goose Trail
Waterbirds of every kind flock to the playa lakes and reservoirs just south of Eads. Plovers, sandpipers, cranes, egrets, grebes, gulls, terns and ducks gather here in huge numbers in migration. Tens of thousands of snow and Ross’s Geese and other waterfowl stay all winter, to star as the main attraction in Lamar’s annual Snow Goose Festival each February. At any season of the year, the Snow Goose trail is sure to provide an awesome wildlife viewing experience.

Pronghorn Trail
Finding great places for wildlife viewing along the Arkansas River is one of the benefits of traveling the Pronghorn Trail. High plains cactus-studded grasslands surround shallow southeastern Colorado reservoirs teeming with waterfowl and shorebirds during migration. The cottonwood corridors along the river feature outstanding viewing opportunities throughout the year at public and privately owned sites that are never far from the beaten path. Here, you can find adventure and wildlife, without venturing far from the pavement. 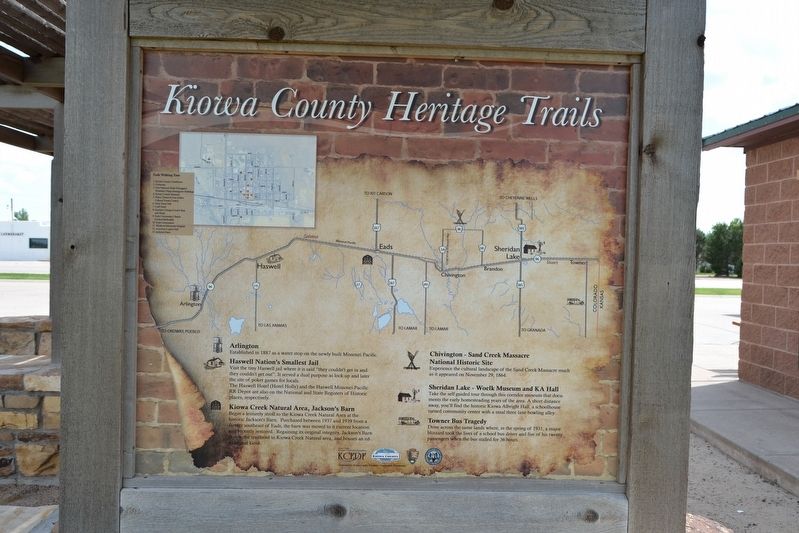 By Duane Hall, July 15, 2017
6. Eads Roadside Park Exhibit
Kiowa County Heritage Trails
habitat islands of city parks and cemeteries in Lamar, Granada and Holly; the woodlots and stream corridors of private ranches; and the rocky canyon at Two Buttes State Wildlife Area. A burrowing owl might pop out of any nearby prairie-dog burrow. With lesser prairie-chicken dancing on leks, sandhill cranes, pronghorns and deer, and the subtle short-grass prairie scenery, you’ve got a top-flight destination for naturalists of all kinds.

Plover Trail
The Plover Trail promises excellent wildlife viewing opportunities along the Arkansas River and neighboring lakes, ponds and prairie. Look for mountain plovers that breed in the dry, high plains deserts away from the river, endangered piping and snowy plovers nesting alongside rare least terns on the shores of shallow alkali lakes, he semipalmate, black-bellied and American golden plovers that migrate through in spring and fall, and the ubiquitous killdeer (also a plover) found here sometimes even in winter. Take the time to celebrate this diversity of plovers, mammals, reptiles, weather patterns, natural landscapes, history and human cultures along the muddy Arkansas River.

Just south of Eads, see shorebirds, wading birds, waterfowl, raptors, songbirds of all shapes and colors … like an oasis amid the prairie, this spring-fed pond 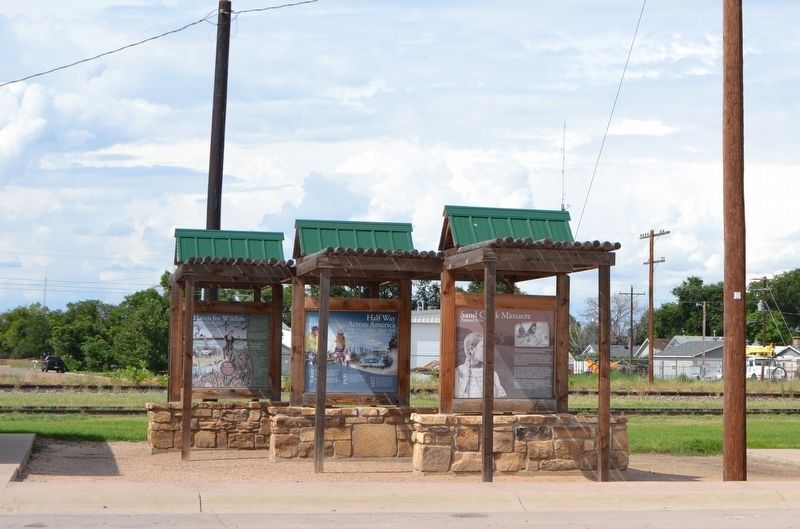 By Duane Hall, July 15, 2017
7. Eads Roadside Park Exhibit
and wetland is a magnet for birds. Coyotes, deer and other wildlife haunt the banks and prairie uplands.

From the historic barn, walk the easy trail or drive the half-mile to the eight-acre pond. Here you can fish, hike, watch birds and other wildlife, picnic or just enjoy the day.

Did You Know?
Over 400 species of birds can be found in the Canyons and Plains of Southeast Colorado.

Arlington
Established in 1887 as a water stop on the newly built Missouri Pacific.

Haswell Nation’s Smallest Jail
Visit the tiny Haswell jail where it is said “they couldn’t get in and they couldn’t get out”. It served a dual purpose as lock-up and later the site of poker games for locals.
The Haswell Hotel (Hotel Holly) and the Haswell Missouri-Pacific RR Depot are also on the National and State Registers of Historic places, respectively. 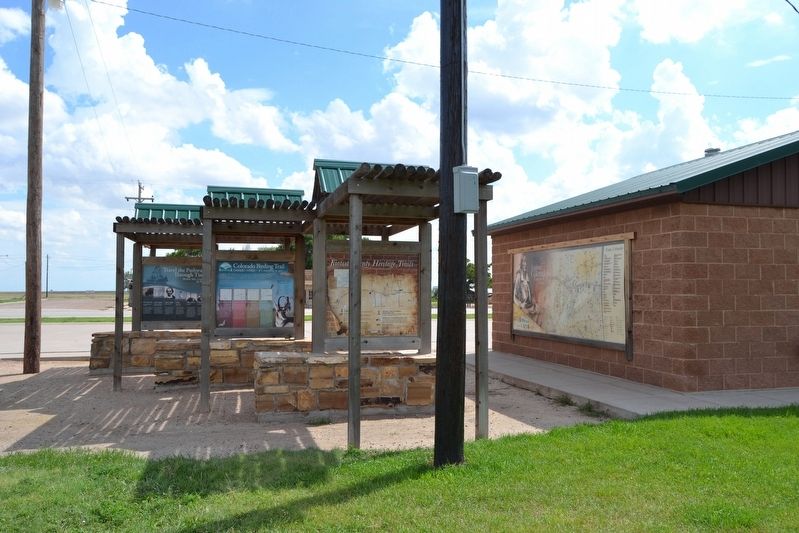 By Duane Hall, July 15, 2017
8. Eads Roadside Park Exhibit
southeast of Eads, the barn was moved to its current location and recently restored. Regaining its original integrity, Jackson’s Barn is now the trailhead to Kiowa Creek Natural area, and houses an educational kiosk.

Towner Bus Tragedy
Drive across the same lands where, in the spring of 1931, a major blizzard took the lives of a school bus driver and five of his twenty passengers when the bus stalled for 36 hours. 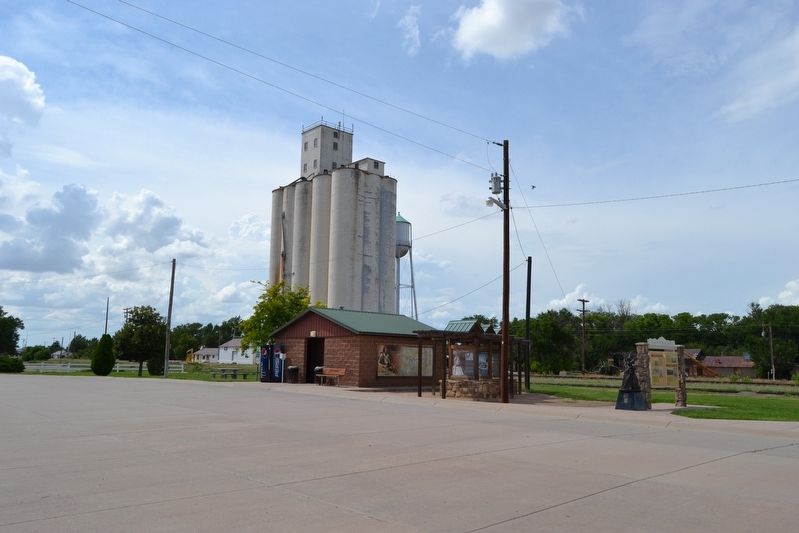