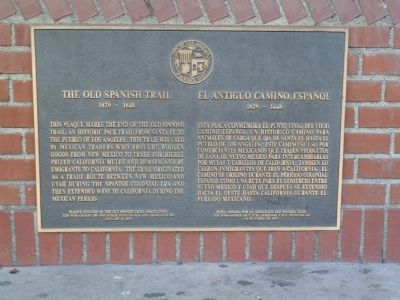 This plaque marks the end of the Old Spanish Trail, an historic pack trail from Santa Fe to the Pueblo of Los Angeles. This trail was used by Mexican traders who brought woolen goods from New Mexico to trade for highly prized California mules and horses, and by emigrants to California. The trail originated as a trade route between New Mexico and Utah during the Spanish colonial era and then extended west to California during the Mexican period.

Plaque donated by The Old Spanish Trail Association, Los Pobladores 200, and other individuals and dedicated on January 14, 1999. 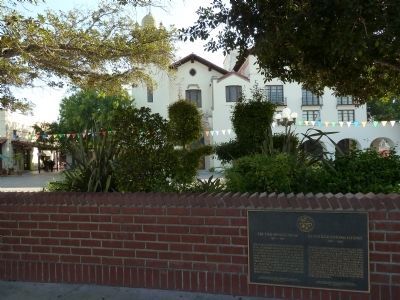 Erected 1999 by The Old Spanish Trail Association, Los Pobladores 200, and others.

Topics and series. This historical marker is listed in these topic lists: Hispanic Americans • Industry & Commerce • Roads & Vehicles • Settlements & Settlers. In addition, it is included in the Old Spanish National Trail series list.