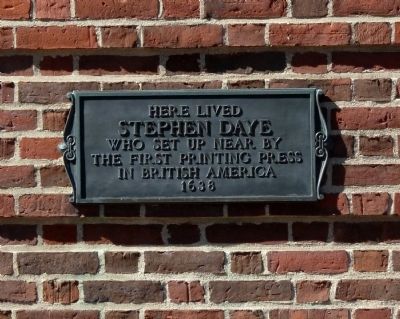 Topics. This historical marker is listed in these topic lists: Arts, Letters, Music • Colonial Era • Communications. A significant historical year for this entry is 1638. 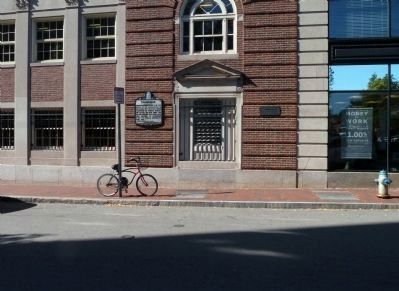 By Roger W. Sinnott, October 6, 2014
2. Marker Seen from Across Dunster Street
The Stephen Daye marker is to the right of the Cambridge marker.

Click or scan to see
this page online
He is best known as printer of the first book in what would later be called the United States. Measuring 4.1 by 6.8 inches, it is popularly called the Bay Psalm Book (1640). Only 11 copies survive from an original press run of 1,700. In November 2013, Boston’s Old South Church sold one of its two copies at Sotheby’s for a record $14.2 million.

Related markers. Click here for a list of markers that are related to this marker. Rowley Burial Ground

2. John of London (ship). Wikipedia entry:
The John of London was a ship, possibly built during the 1620s by Robert Trenckmore in his shipyards at Shoreham-By-Sea in West Sussex, England. The ship was captained by George Lamberton during its 1638 voyage from Hull, Yorkshire to Boston, Massachusetts. This voyage brought Ezekiel Rogers and a number of families that went on to settle Rowley, Massachusetts. The voyage was also notable for bringing the first printing press to North America, which went on to be used at Harvard College. (Submitted on March 23, 2018, by Cosmos Mariner of Cape Canaveral, Florida.) 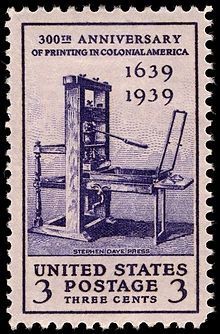