A Place Through Time 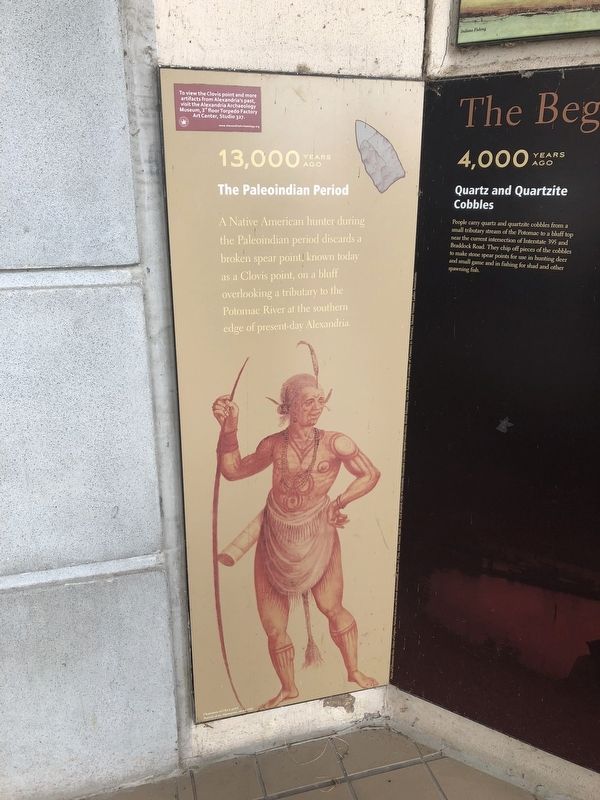 13,000 years ago
The Paleoindian Period

A Native American hunter during the Paleoindian period discards a broken spear point, on a bluff overlooking a tributary to the Potomac River at the southern edge of present-day Alexandria.

4,000 years ago
Quartz and Quartzite Cobbles

People carry quartz and quartzite cobbles from a small tributary stream of the Potomac to a bluff top near the current intersection of Interstate 395 and Braddock Road. They chip off pieces of the cobbles to make stone spear points for use in hunting deer and small game and in fishing for shad and other spawning fish.

Native Americans establish a small seasonal campsite at present-day Jones Point to hunt and exploit the resources of the adjacent marshland. They live in circular structures about 12 feet in diameter made of bent saplings, probably covered with bark or mats.

1608
Exploration of the Chesapeake

Captain John Smith's shallop sails past what is now 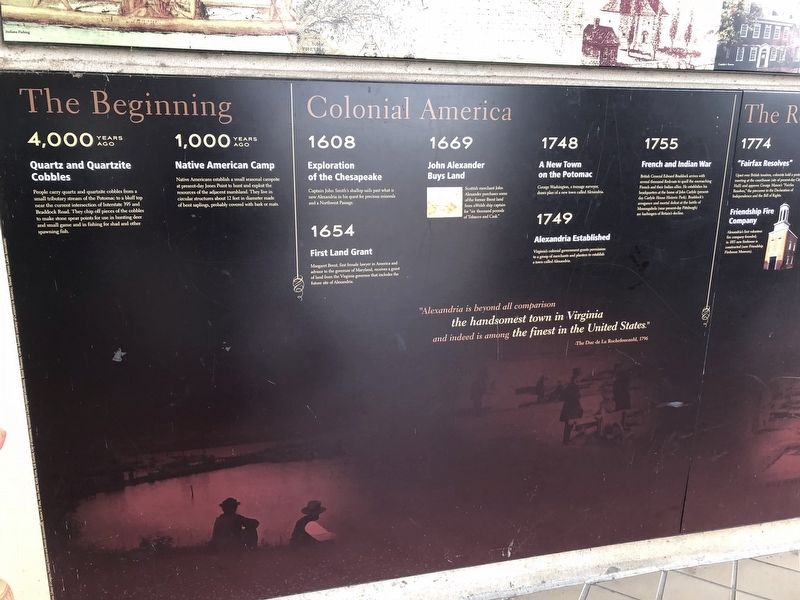 By Devry Jones, March 30, 2018
2. Alexandria Marker
Alexandria in his quest for precious minerals and a Northwest Passage.

Margaret Brent, first female lawyer in American and advisor to the governor of Maryland, receives a grant of land from the Virginia governor that includes the future site of Alexandria.

Scottish merchant John Alexander purchases some of the former Brent land from a Welsh ship captain for "six thousand pounds of Tobacco and Cask."

Virginia's colonial government grants permission to a group of merchants and planters to establish a town called Alexandria.

British General Edward Braddock arrives with several thousand Redcoats to quell the encroaching French and their Indian allies. He establishes his headquarters at the home of John Carlyle (present-day Carlyle House Historic Park). Braddock's arrogance and mortal defeat at the battle of Monongahela (near present-day Pittsburgh) are harbingers of Britain's decline. 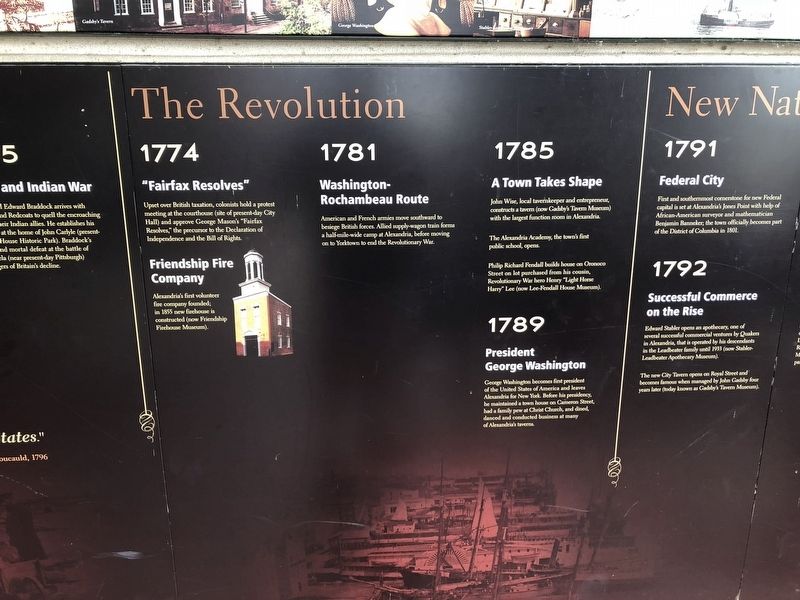 Upset over British taxation, colonists hold a protest meeting at the courthouse (site of present-day City Hall) and approve George Mason's "Fairfax Resolves," the precursor to the Declaration of Independence and the Bill of Rights.

American and French armies move southward to besiege British forces. Allied supply-wagon train forms a half-mile-wide camp at Alexandria, before moving on to Yorktown to end the Revolutionary War. 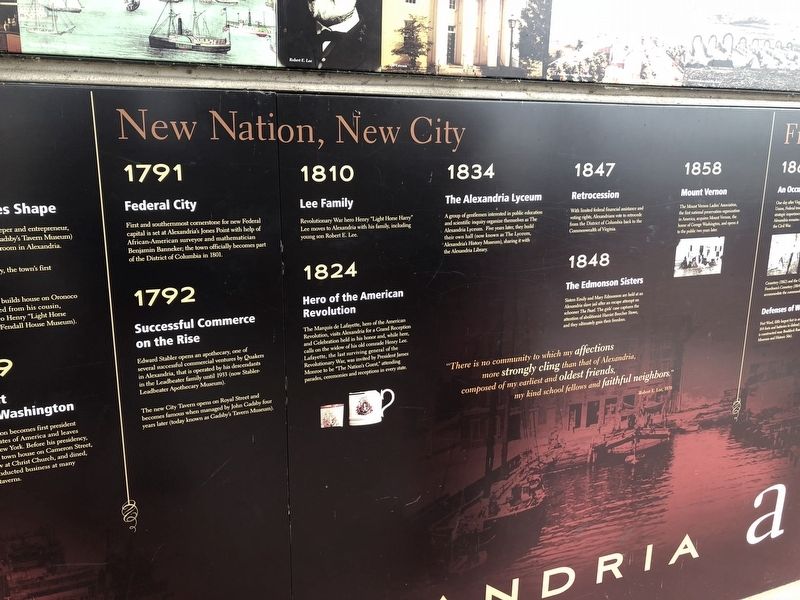 By Devry Jones, March 30, 2018
4. Alexandria Marker
of the United States of America and leaves Alexandria for New York. Before his presidency, he maintained a town house on Cameron Street, had a family pew at Christ Church, and dined, danced and conducted business at many of Alexandria's taverns.

First and southernmost cornerstone for new Federal capital is set at Alexandria's Jones Point with help of African-American surveyor and mathematician Benjamin Banneker; the town officially becomes part of the District of Columbia in 1801.

1792
Successful Commerce on the Rise

Edward Stabler opens an apothecary, one of several successful commercial ventures by Quakers in Alexandria, that is operated by his descendants in the Leadbeater family until 1933 (now Stabler-Leadbeater Apothecary Museum).

1824
Hero of the American Revolution

The Marquis de Lafayette, hero of the American Revolution, visits Alexandria for a Grand Reception and Celebration held in his honor 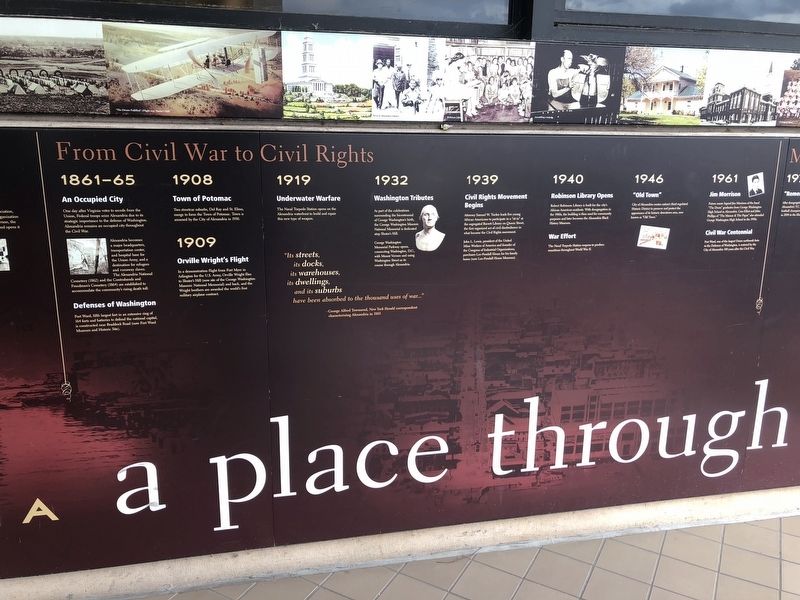 By Devry Jones, March 30, 2018
5. Alexandria Marker
and, while here, calls on the widow of his old comrade Henry Lee. Lafayette, the last surviving general of the Revolutionary War, was invited by President James Monroe to be "The Nation's Guest," attending parades, ceremonies and receptions in every state.

A group of gentlemen interested in public education and scientific inquiry organize themselves as the Alexandria Lyceum. Five years later, they build their own hall (now known as The Lyceum, Alexandria's History Museum), sharing it with the Alexandria Library.

With limited federal financial assistance and voting rights, Alexandrians vote to retrocede from the District of Columbia back to the Commonwealth of Virginia.

Sisters Emily and Mary Edmonson are held at an Alexandria slave jail after an escape attempt on schooner The Pearl. The girls' case captures the attention of abolitionist Harriet Beecher Stowe, and they ultimately gain their freedom.

The Mount Vernon Ladies' Association, the first national preservation organization in America, acquires Mount Vernon, the home of George Washington, and it opens to the public two years later.

"There is no community to which my affections
more 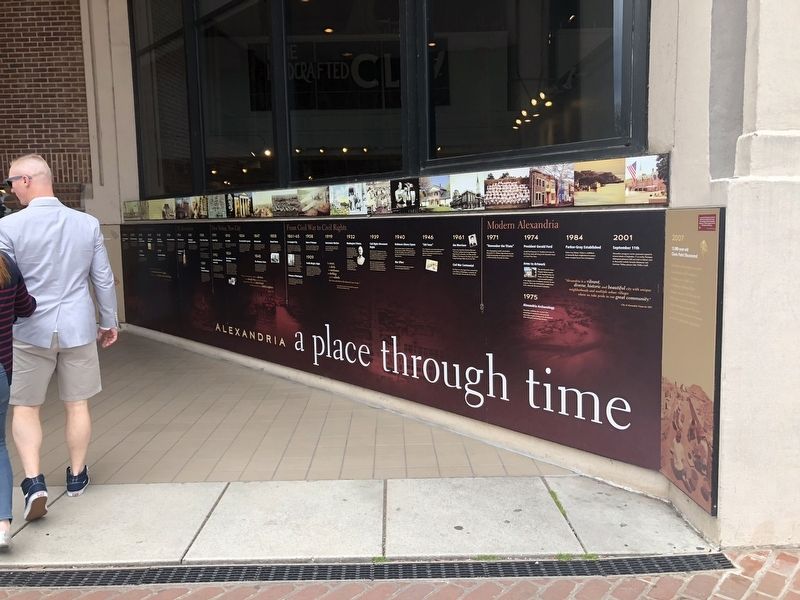 By Devry Jones, March 30, 2018
6. Alexandria Marker
strongly cling than that of Alexandria,
composed of my earliest and oldest friends,
my kind school fellows and faithful neighbors."
-Robert E. Lee, 1870

From Civil War to Civil Rights

One day after Virginia votes to secede from the Union, Federal troops seize Alexandria due to its strategic importance to the defense of Washington. Alexandria remains an occupied city throughout the Civil War.

Alexandria becomes a major headquarters, transportation center and hospital base for the Union Army, and a destination for refugees and runaway slaves. The Alexandria National Cemetery (1862) and the Contrabands and Freedman's Cemetery (1864) are established to accommodate the community's rising death toll.

Fort Ward, fifth largest fort in an extensive ring of 164 forts and batteries to defend the national capital, is constructed near Braddock Road (now Fort Ward Museum and Historic Site).

Two streetcar suburbs, Del Ray and St. Elmo, merge to form the Town of Potomac. Town is annexed by the City of Alexandria in 1930.

In a demonstration flight from Fort Myer in Arlington for the U.S. Army, Orville Wright flies to Shuter's Hill (now site of the George Washington Masonic National Memorial) and back, and the Wright brothers are awarded the first military airplane contract.

The Naval Torpedo Station opens on the Alexandria waterfront to build and repair this new type of weapon.

Attorney Samuel W. Tucker leads five young African Americans to participate in a "sit in" at the segregated Barrett Library on Queen Street, the first organized act of civil disobedience in what became the Civil Rights movement.

Robert Robinson Library is built for the city's African American residents. With desegregation in the 1960s, the building is then used for community purposes and later becomes the Alexandria Black History Museum.

Fort Ward, one of the largest Union earthwork forts in the Defenses of Washington, is restored by the City of Alexandria 100 years after the Civil War.

"Its streets,
its docks,
its warehouses,
its dwellings,
and its suburbs
have been absorbed to the thousand uses of war..."
-George Alfred Townsend, New York Herald correspondent characterizing Alexandria in 1863

The old Alexandria Naval Torpedo Station reopens as the Torpedo Factory Art Center, one of the nation's most successful projects in the adaptive reuse of a historic structure for arts purposes. This is one of Alexandria's contribution to the nationwide Bicentennial Celebration.

Alexandria establishes the country's first archaeological commission and community archaeology program, leading to the development of the Alexandria Archaeology Museum.

"Alexandria is a vibrant,
diverse, historic and beautiful city with unique
neighborhoods and multiple urban villages
where we take pride in our great community."
-City of Alexandria Vision for 2015

Alexandria's archaeologists excavating Contrabands and Freedmen's Cemetery, on a bluff once overlooking a Potomac River tributary, recover a 13,000-year-old Clovis spear point discarded by a Native American Hunter. The stone tool is the earliest evidence of human presence in present-day Alexandria.

Erected by City of Alexandria.