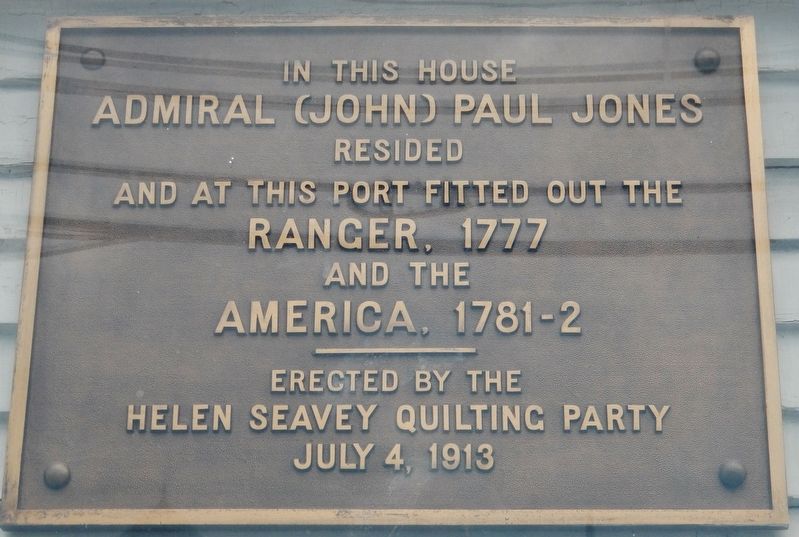 In this house
Admiral (John) Paul Jones
resided
and at this port fitted out the
Ranger, 1777
and the
America, 1781-2

Location. 43° 4.51′ N, 70° 45.626′ W. Marker is in Portsmouth, New Hampshire, in Rockingham County. Marker is on Middle Street (U.S. 1) north of State Street, on the right when traveling north. Marker is a metal plaque mounted above eye level on the east side of the Historic John Paul Jones House, near the southeast corner of the house. Touch for map. Marker is at or near this postal address: 43 Middle Street, Portsmouth NH 03801, United States of America. Touch for directions. 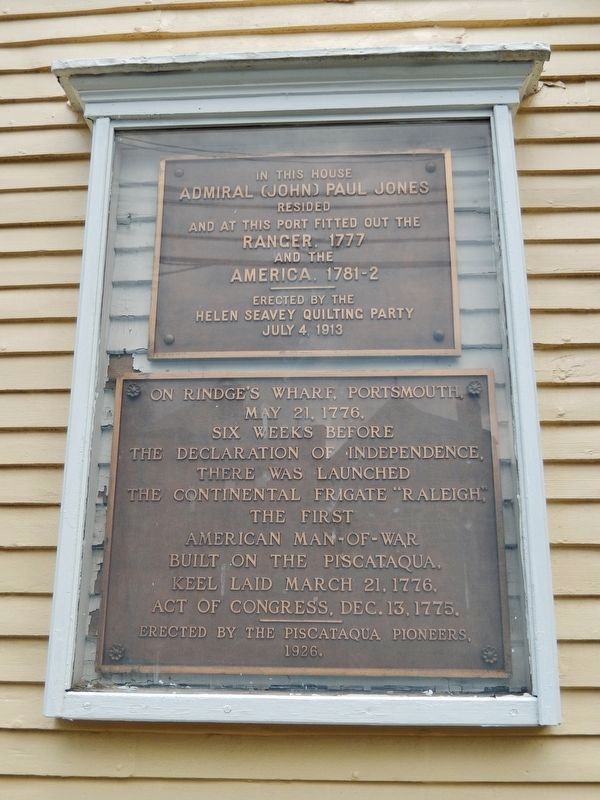 More about this marker. This marker and an unrelated marker are mounted on the wall, between a window and the southeast corner of the house, and protected by a frame holding a transparent plastic cover.

Also see . . .
1. John Paul Jones House.
John Paul Jones, colonial America’s first sea warrior, was a tenant of the Widow Purcell in this house in 1781 while he supervised the building of the Navy’s ship America nearby. Though he loved Portsmouth, he left New Hampshire in 1782 never to return. His house is now the museum of Portsmouth men, women and children, where their stories live. (Submitted on April 7, 2018, by Cosmos Mariner of Cape Canaveral, Florida.)

2. USS Ranger (1777).
The first USS Ranger was a sloop-of-war in the Continental Navy in active service in 1777–1780; she received the second salute to an American fighting vessel by a foreign power (the first salute was received by the USS Andrew Doria when on 16 November 1776 she arrived at St. Eustatius 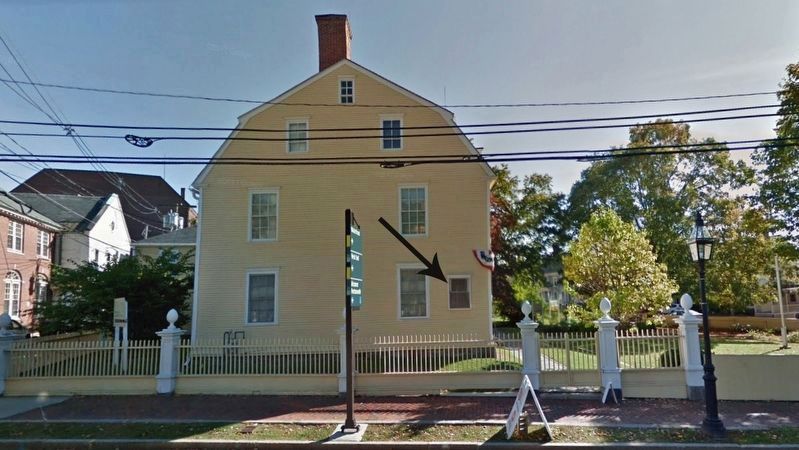 3. John Paul Jones House (east side; marker visible near corner at right)
and the Dutch island returned her 11-gun salute). She was captured in 1780, and brought into the Royal Navy as HMS Halifax. She was decommissioned in 1781. Ranger (initially called Hampshire) was launched 10 May 1777 by James Hackett, master shipbuilder, at the shipyard of John Langdon on what is now called Badger's Island in Kittery, Maine; Captain John Paul Jones in command. (Submitted on April 7, 2018, by Cosmos Mariner of Cape Canaveral, Florida.)

3. USS America (1782).
On 9 November 1776, the Continental Congress authorized the construction of three 74-gun ships of the line. One of these was America, laid down in May 1777 in the shipyard of John Langdon. To get America ready for sea and, on the 26th, picked Captain John Paul Jones as her commanding officer. Jones reached Portsmouth on 31 August and threw himself into the task of completing the man-of-war. However, before the work was finished, Congress decided on 3 September 1782 to present the ship to King Louis XVI of France to replace the ship of the line Magnifique, which had run aground and been destroyed on 11 August 1782 while attempting to enter Boston Harbor. The ship was also to symbolize the new nation's appreciation for France's service to and sacrifices in behalf of the cause of the American patriots. Despite his disappointment over losing his chance 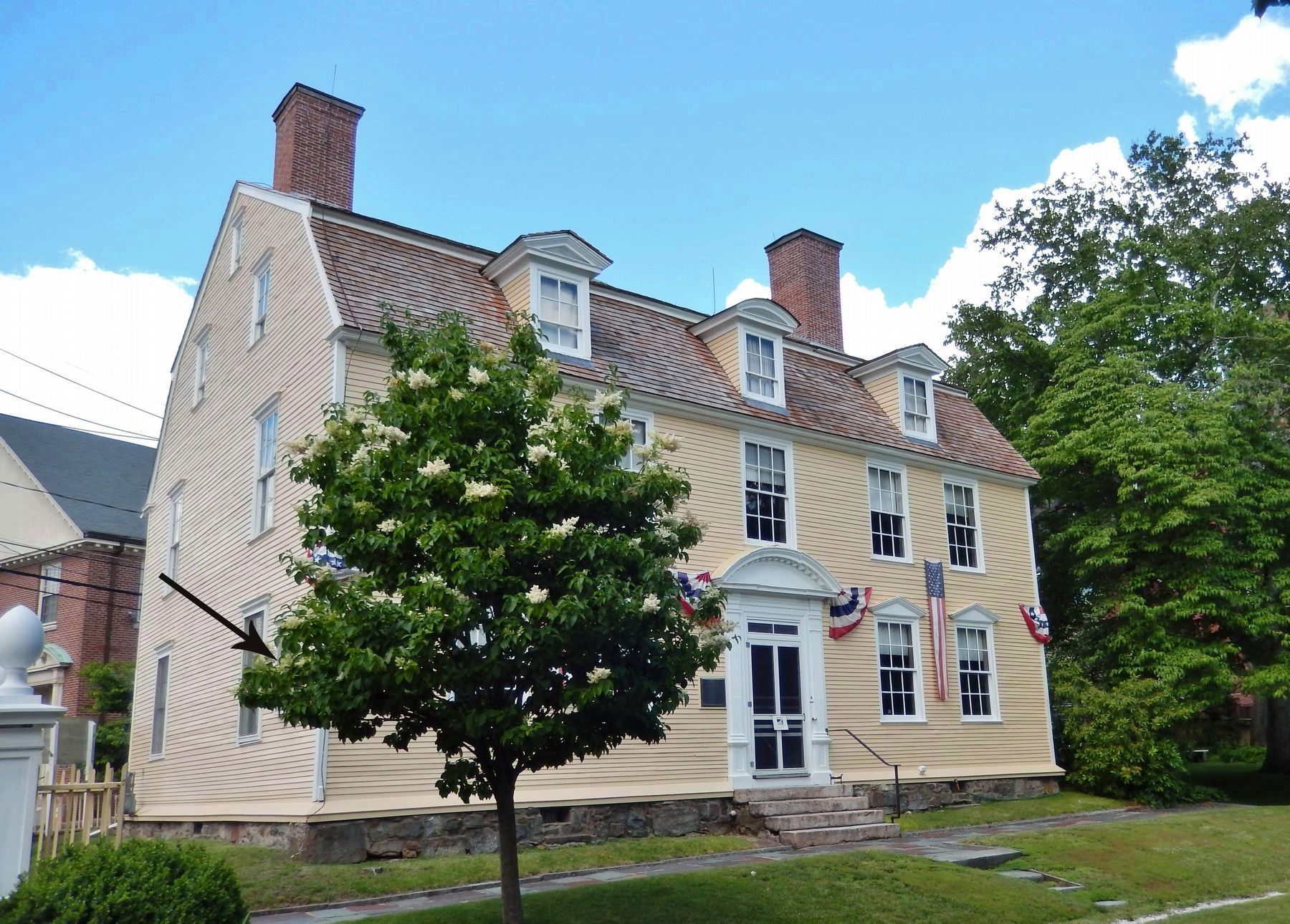