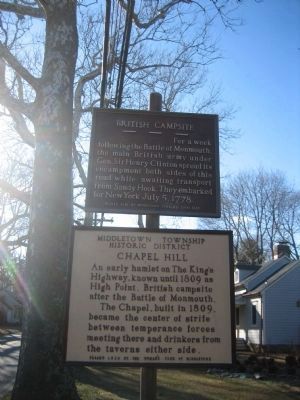 Middletown Township Historic District. An early Hamlet on the King’s Highway, known until 1809 as High Point. British Campsite after the Battle of Monmouth. Chapel, built in 1809, became the center of strife between temperance forces meeting there and drinkers from the taverns either side.

Erected 1976 by The Woman’s Club of Middletown.

Topics. This historical marker is listed in these topic lists: Colonial Era • Settlements & Settlers • War, US Revolutionary • Women. A significant historical year for this entry is 1809. 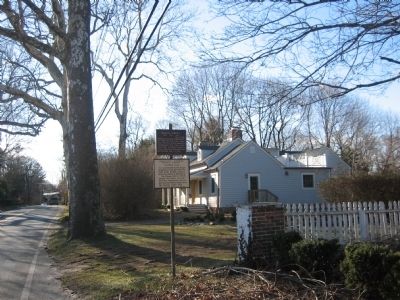 More about this marker. The upper of the two Historical Markers pictured here is one of several identical Historical Markers titled British Campsite that have their own pages in this database. They were all placed by the Middletown Lions club in 1976 to demarcate the places along the old King’s Highway in modern day Atlantic Highlands and Middletown, NJ.