The National Memorial for Peace and Justice

In the 17th and 18th centuries, 12 million African people were kidnapped, chained, and brought to the Americas after a torturous journey across the Atlantic Ocean. Nearly two million people died during the voyage. The labor of enslaved black people fueled economic growth in the United States, where an ideology of white supremacy and racial difference was created to justify slavery and make it morally acceptable.

In the 19th century, the demand for enslaved labor grew despite calls for the end of the international slave trade. A thriving plantation economy in the United States and the forcible taking of land from Native people generated the Domestic Slave Trade where over a million enslaved people in the North were trafficked to the South. The population of enslaved people in the South grew dramatically and black people suffered brutal abuse and mistreatment throughout this region. Nearly half of all enslaved people were separated from their children, spouses, parents, or siblings during the Domestic Slave Trade.

After the South's defeat in the bloody Civil War, the 13th Amendment was passed, prohibiting involuntary servitude

Photographed By Mark Hilton, May 31, 2018
2. The National Memorial for Peace and Justice Marker

Click or scan to see
this page online
and forced labor but leaving intact a bitter resistance to racial equality. Continued support for white supremacy and racial hierarchy meant that slavery in America did not end—it evolved. The identity of many white Americans especially in the South, was grounded in the belief that they were inherently superior to African Americans. Many white people reacted violently to the requirement to treat their former "human property" as equals and pay for their labor. Plantation owners attacked black people simply for claiming their freedom. In the first two years after the war, thousands of black people were murdered for asserting freedom or basic rights, sometimes in attacks by white mobs in communities like Memphis and New Orleans.

Efforts in Congress to provide federal protection to formerly enslaved black people were undermined by the United States Supreme Court, which overturned laws that provided remedies to black people facing violent intimidation. Between 1868 and 1871, a wave of terror swept across the South that resulted in the deaths of thousands of African Americans who often were killed merely for failing to obey a white person. Northern politicians retreated from a commitment to protect black people in the 1870s and Reconstruction collapsed. In 1877, federal troops were removed from the region and racial terror and violence directed at black people intensified.

Photographed By Mark Hilton, May 31, 2018
3. The National Memorial for Peace and Justice Marker
White Southerners barred black people from voting created an exploitative economic system of sharecropping and tenant farming that would keep African Americans indentured and poor for generations; and made racial segregation the law of the land.

Convict leasing—a horrific system in which black people convicted of largely social crimes that applied only to them were leased to private businesses who forced them to labor under inhuman conditions—created a new kind of bondage described as "worse than slavery." Racial integrity laws prohibited social interactions between people of different races, especially black men and white women.

Racial terror lynchings emerged as a primary tool to enforce racial hierarchy and oppression and to force black people to accept abusive mistreatment and subordination. Federal, state, and local governments largely tolerated these terrorist acts, which claimed the lives of thousands of African Americans, including many whose identities will never be known.

Black lynching victims killed between 1877 and 1950 primarily died in the 12 Southern states, with Mississippi, Georgia, and Louisiana among the deadliest. Several hundred additional victims were lynched in other regions, with the highest numbers in Oklahoma, Missouri, Illinois, and West Virginia.

Some lynching victims were targeted for their

Photographed By Mark Hilton, May 31, 2018
4. The National Memorial for Peace and Justice Marker
efforts to organize black communities for political and economic equality. Others were lynched for refusing to address a white man as "sir"or demanding to be served at the counter in a segregated soda shop. Hundreds were lynched based on accusations of offenses like arson, robbery, non-sexual assault, and vagrancy. In a strictly maintained racial caste system, white lives and white property held heightened value, while the lives of black people held little or none.

Nearly 25 percent of African American lynching victims were accused of sexual assault and nearly 30 percent were accused of murder. Because African Americans were presumed guilty and dangerous, accusations lodged against them were rarely scrutinized. Nearly all were lynched without an investigation, much less a trial. Efforts to pass federal anti-lynching legislation repeatedly failed because of opposition by Southern elected officials. Only 1 percent of lynchings committed after 1900 led to a criminal conviction.

With no protection from the constant threat of death, nearly six million black Americans fled the South between 1910 and 1970. Many left behind homes, families and employment to flee racial terror as traumatized refugees. Lynching profoundly reshaped the geographic, political, social, and economic conditions of African Americans in ways still evident today.

Photographed By Mark Hilton, May 31, 2018
5. The National Memorial for Peace and Justice Marker
millions of black Americans were targeted by racial terror lynchings. Over 4,400 lynchings of African Americans by groups of two to over 10,000 white people have been documented. These lynchings, often conducted in broad daylight and sometimes "on the courthouse lawn," were vicious acts of murder and their perpetrators acted with impunity. Black people were lynched by hanging, burning, shooting. drowning, stabbing, and beating. Some were falsely accused of rape or murder, presumed guilty, and killed without trial or investigation; others were lynched for political activism or economic success, slaughtered in widespread attacks on black killed in place of a friend or relative whom the mob could not locate, or targeted for violating social rules of racial hierarchy.

Racial terror lynchings were directly tied to the history of enslavement and the re-establishment of white supremacy after the Civil War. These lynchings were distinct from hangings and mob violence committed against white people and other groups because they were intended to terrorize black Americans and enforce racial hierarchy. Unlike frontier justice in the West, racial terror lynchings generally took place in communities with functioning criminal courts that were viewed as too good for African Americans; despite its lawlessness and terrifying unpredictability, lynching was sanctioned by law enforcement 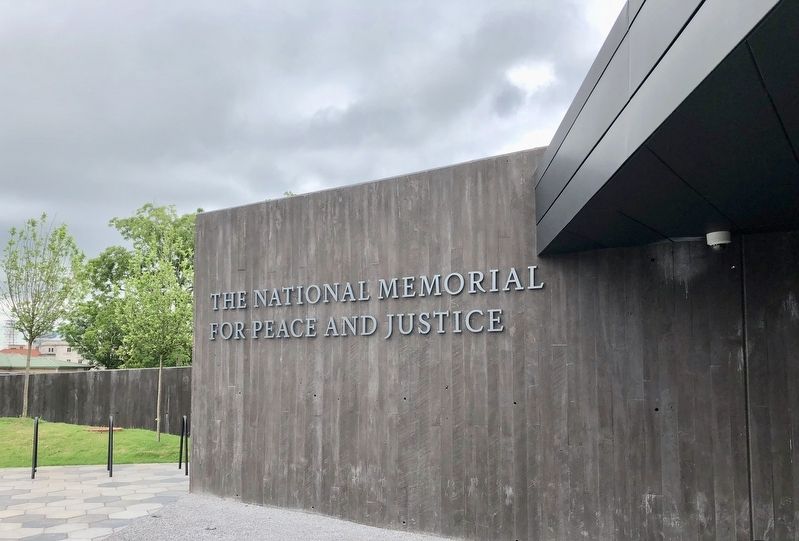 Photographed By Mark Hilton, May 31, 2018
6. The National Memorial for Peace and Justice entrance.
and elected officials. Racial terror lynching was characterized by extreme violence: victims were tortured for hours before their brutalized bodies were left out on display to traumatize other black people. Members of the mob frequently documented their atrocities by posing for photographs with a dangling, bloodied, or burnt corpse.

This era left thousands dead; significantly marginalized black people politically, financially, and socially; and inflicted deep trauma on the entire African American community. White people who witnessed, participated in, and socialized their children in a culture that tolerated gruesome lynchings also were psychologically damaged. State officials' tolerance of lynching created enduring national and institutional wounds that have not yet healed. Lynchings occurred in communities where African Americans disproportionately poor, overrepresented in prisons and jails, and underrepresented in decision-making roles in the criminal justice system.

At this memorial, we remember the thousands killed, the generations of black people terrorized, and the legacy of suffering and injustice that haunts us still. We also remember the countless 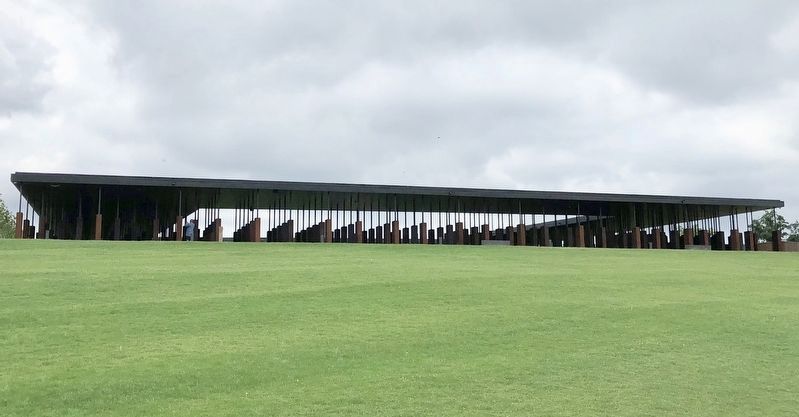 Photographed By Mark Hilton, May 31, 2018
7. The National Memorial for Peace and Justice
victims whose deaths were not recorded in news archives and cannot be documented, who are recognized solely in the mournful memories of those who loved them. We believe that telling the truth about the age of racial terror and reflecting together on this period and its legacy can lead to a more thoughtful and informed commitment to justice today. We hope this memorial will inspire individuals, communities, and this nation to claim our difficult history and commit to a just and peaceful future.

Erected 2018 by the Equal Justice Initiative.

Topics. This historical marker is listed in these topic lists: African Americans • Civil Rights • Notable Events. A significant historical year for this entry is 1868.

Other nearby markers. At least 8 other markers are within walking distance of this marker. The Transatlantic Slave Trade (a few steps from this marker); Racial Inequality in the United States (about 300 feet away, measured in a direct line); Montgomery Racial Segregation on Buses (about 400 feet away); Old Ship A.M.E. Zion Church (about 600 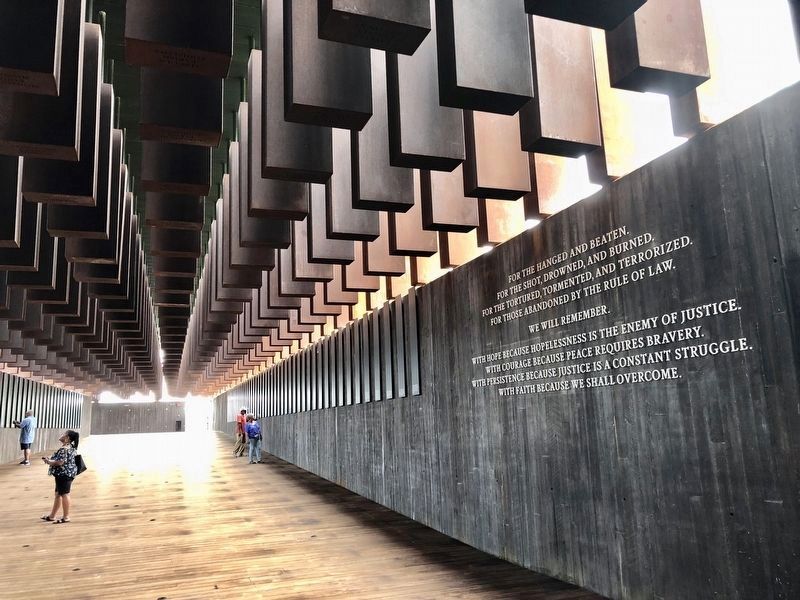 Photographed By Mark Hilton, May 31, 2018
8. The National Memorial for Peace and Justice
feet away); Marching On (about 700 feet away); The Five Points Area: A Unique Blend of Communities in 1965 (about 700 feet away); Kahl Montgomery/Catoma Street Church of Christ (approx. 0.2 miles away); Judge Frank M. Johnson: Judicial Fairness in the Age of Segregation (approx. 0.2 miles away). Touch for a list and map of all markers in Montgomery.

Also see . . .  Equal Justice Initiative website about the memorial. (Submitted on May 31, 2018, by Mark Hilton of Montgomery, Alabama.) 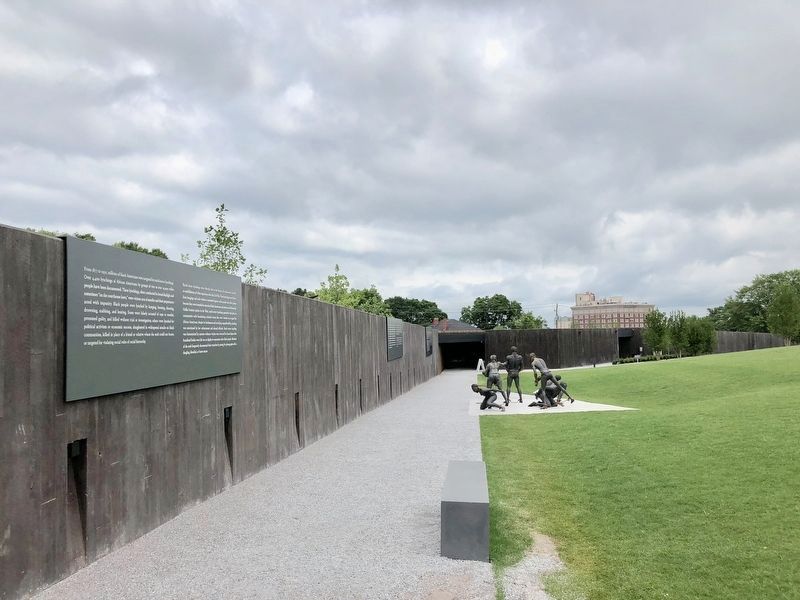 Photographed By Mark Hilton, May 31, 2018
9. The National Memorial for Peace and Justice Markers 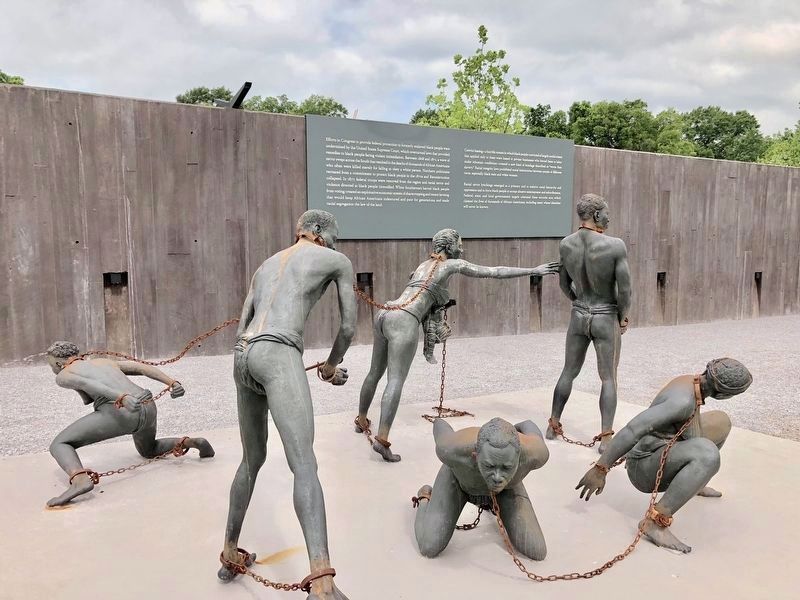 Photographed By Mark Hilton, May 31, 2018
10. The National Memorial for Peace and Justice Marker
Sculpture by Kwame Akoto-Bamfo. 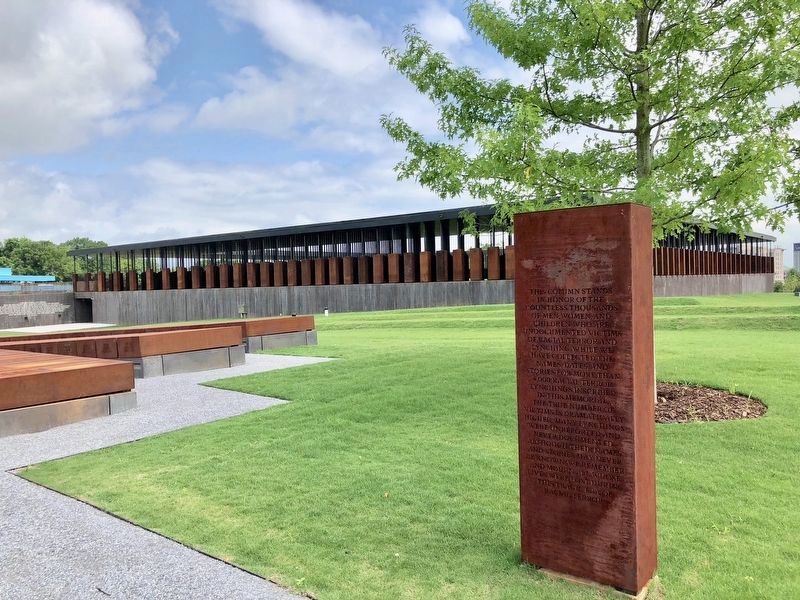