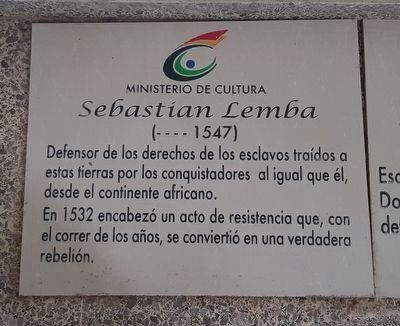 By J. Makali Bruton, March 11, 2018
1. Sebastián Lemba Marker
Inscription.
English translation:
Sebastián Lemba (? -1547). Defender of the rights of slaves, like himself, who were brought to these lands by the Conquistadores from the African continent. In 1532 he led an act of resistance that, through the years, became a true rebellion. . This historical marker was erected in 1980 by Ministerio de Cultura. It is in Santo Domingo Distrito Nacional Dominican Republic