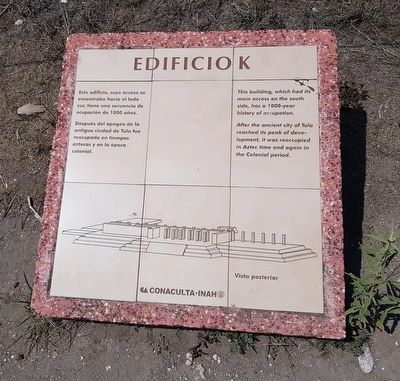 By J. Makali Bruton, June 2, 2018
1. Building K Marker
Inscription.
English: . Building K . This building, which had its main access on the south side, has a 1000-year history of occupation. . . After the ancient city of Tula reached its peak of development, it was reoccupied in Aztec time and again in the Colonial period. . . Caption: A reverse view . This historical marker was erected by CONACULTA y INAH. It is in Tula de Allende in Municipality of Tula de Allende Hidalgo Mexico