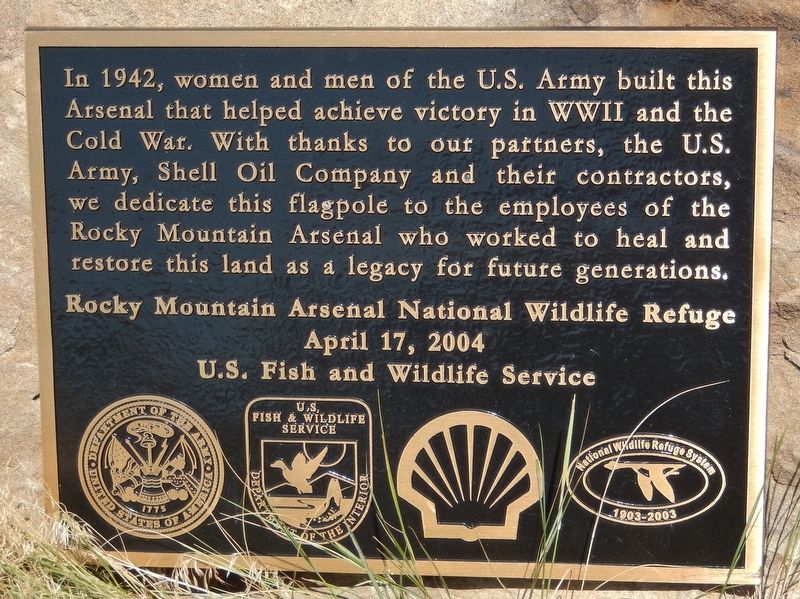 In 1942, women and men of the U.S. Army built this Arsenal that helped achieve victory in WWII and the Cold War. With thanks to our partners, the U.S. Army, Shell Oil Company and their contractors, we dedicate this flagpole to the employees of the Rocky Mountain Arsenal who worked to heal and restore this land as a legacy for future generations. 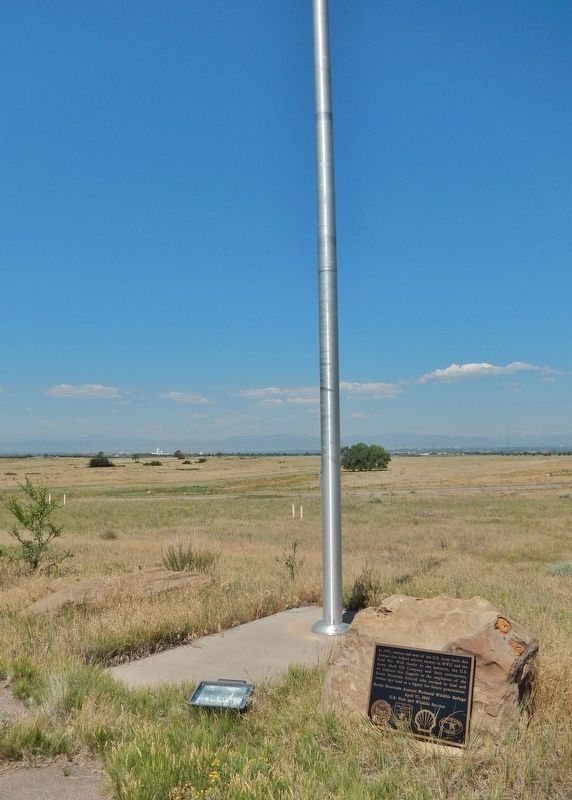 Click or scan to see
this page online
Refuge Contact Station parking lot, about 1.8 miles from the Visitor Center. Touch for map. Marker is in this post office area: Commerce City CO 80022, United States of America. Touch for directions.

More about this marker. Marker is a large metal plaque mounted at ground level on a large boulder. Marker is at site of building that was a Rocky Mountain Arsenal U.S. Army support facility.

Also see . . .
1. Rocky Mountain Arsenal: About the Refuge. As production declined at war's end, a portion of the idle facilities were leased to Shell Chemical Co. for the production of agricultural chemicals. The Arsenal was later used for Cold-War weapons production and demilitarization. In the early 1980s, the Army and Shell began an extensive environmental cleanup under the oversight of federal, state, and local regulatory agencies. The Arsenal’s cleanup program was completed in 2010 and the Refuge has reached its final size of 15,000 acres making it one of the largest urban refuge's in the country. (Submitted on June 27, 2018, by Cosmos Mariner of Cape Canaveral, Florida.) 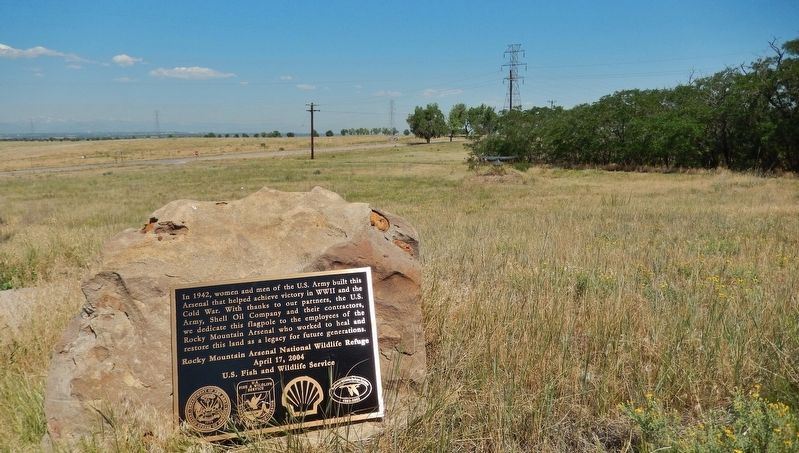 Photographed By Cosmos Mariner, June 27, 2018
3. Rocky Mountain Arsenal National Wildlife Refuge Marker (wide view)
. The Rocky Mountain Arsenal was built in 1942 to manufacture chemical weapons. A portion of the site was leased to private industry in 1946 for petroleum production and agricultural and industrial chemical manufacturing. When the American chemical weapons program was shut down after the Vietnam War, the RMA served as a site for dismantling and disposing of these weapons. The Shell Oil Company also used a portion of the site in the 1980s to produce pesticides. The RMA was closed in 1985, and in 1987 environmental testing revealed that the site was extremely polluted. The RMA was listed on the National Priorities List, a list of hazardous waste sites in the United States eligible for long-term remedial action (cleanup) financed under the federal Superfund program run by the Environmental Protection Agency. (Submitted on June 27, 2018, by Cosmos Mariner of Cape Canaveral, Florida.) 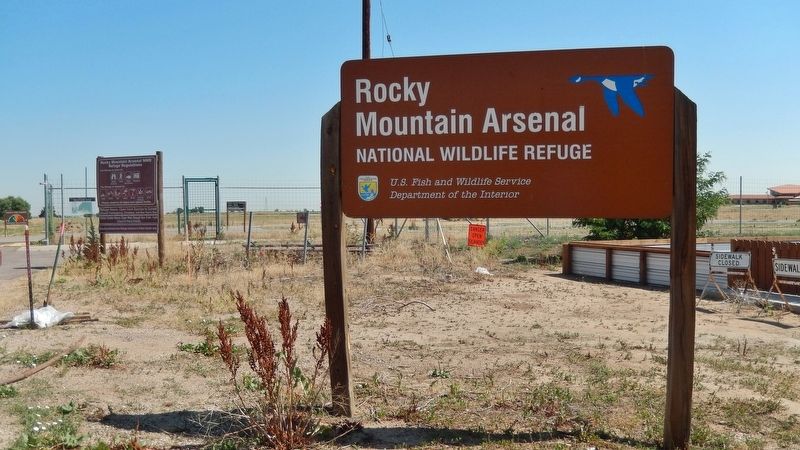 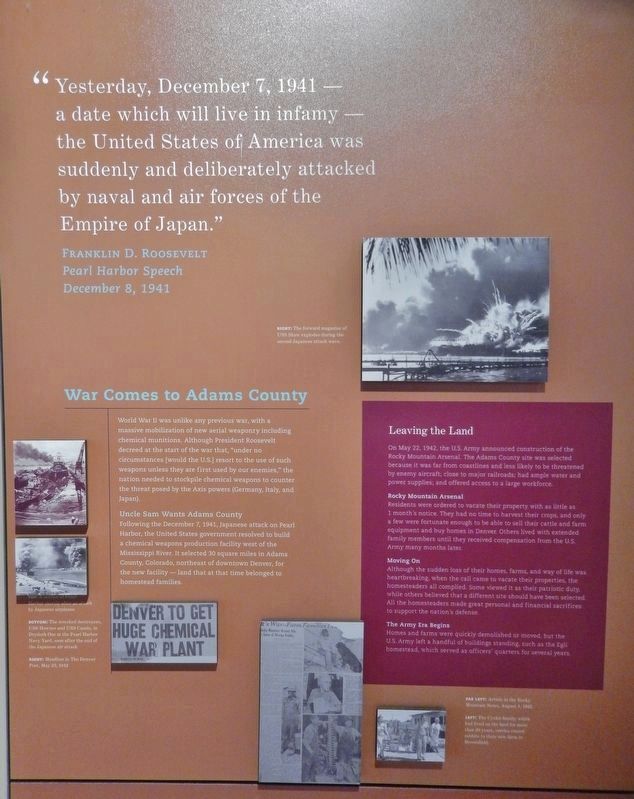 Photographed By Cosmos Mariner, June 27, 2018
5. War Comes to Adams County (interpretive panel inside Rocky Mountain Arsenal Visitor Center)
World War II was unlike any previous war, with a massive mobilization of new aerial weaponry including chemical munitions. Although President Roosevelt decreed at the start of the war that, "under no circumstances [would the U.S.] resort to the use of such weapons unless they are first used by our enemies," the nation needed to stockpile chemical weapons to counter the threat posed by the Axis powers (Germany, Italy, and Japan).

Leaving the Land
On May 22, 1942, the U.S. Army announced construction of the Rocky Mountain Arsenal. The Adams County site was selected because it was far from coastlines and less likely to be threatened by enemy aircraft; close to major railroads; had ample water and power supplies; and offered access to a large workforce.

Rocky Mountain Arsenal
Residents were ordered to vacate their property with as little as 1 month's notice. They had no time to harvest their crops, and only a few were fortunate enough to be able to sell their cattle and farm equipment and buy homes in Denver. Others lived with extended family members until they received compensation from the U.S. Army many months later.

Moving On
Although the sudden loss of their homes, farms, and way of life was heartbreaking, when the call came to vacate their properties, the homesteaders all complied. Some viewed it as their patriotic duty, while others believed that a different site should have been selected. All the homesteaders made great personal and financial sacrifices to support the nation's defense.

The Army Era Begins
Homes and farms were quickly demolished or moved, but the U.S. Army left a handful of buildings standing, such as the Egli homestead, which served as officers' quarters for several years. 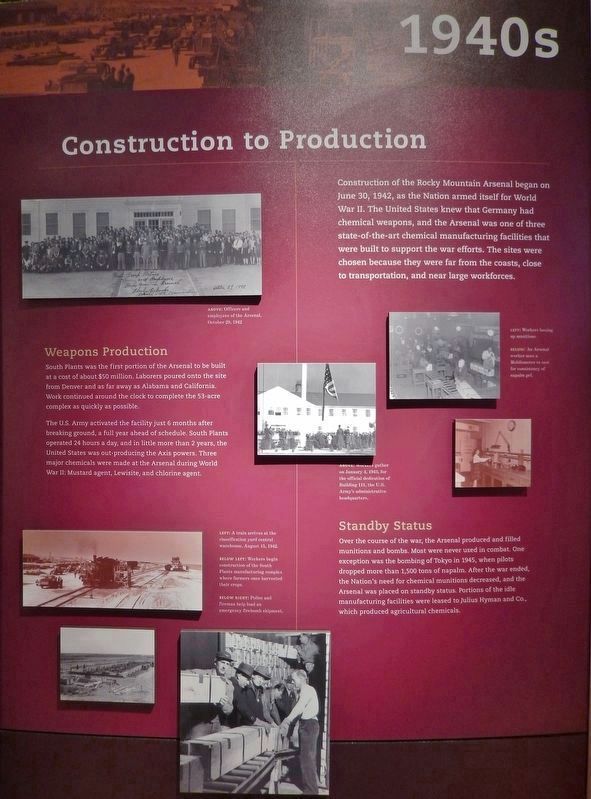 Photographed By Cosmos Mariner, June 27, 2018
6. Construction to Production (interpretive panel inside Rocky Mountain Arsenal Visitor Center)
Construction of the Rocky Mountain Arsenal began on June 30, 1942, as the Nation armed itself for World War II. The United States knew that Germany had chemical weapons, and the Arsenal was one of three state-of-the-art chemical manufacturing facilities that were built to support the war efforts. The sites were chosen because they were far from the coasts, close to transportation, and near large workforces.

Weapons Production
South Plants was the first portion of the Arsenal to be built at a cost of about $50 million. Laborers poured onto the site from Denver and as far away as Alabama and California. Work continued around the clock to complete the 53-acre complex as quickly as possible.
The U.S. Army activated the facility just 6 months after breaking ground, a full year ahead of schedule. South Plants operated 24 hours a day, and in little more than 2 years, the United States was out-producing the Axis powers. Three major chemicals were made at the Arsenal during World War II: Mustard agent, Lewisite, and chlorine agent.

Standby Status
Over the course of the war, the Arsenal produced and filled munitions and bombs. Most were never used in combat. One exception was the bombing of Tokyo in 1945, when pilots dropped more than 1,500 tons of napalm. After the war ended, the Nation's need for chemical munitions decreased, and the Arsenal was placed on standby status. Portions of the idle manufacturing facilities were leased to Julius Hyman and Co., which produced agricultural chemicals. 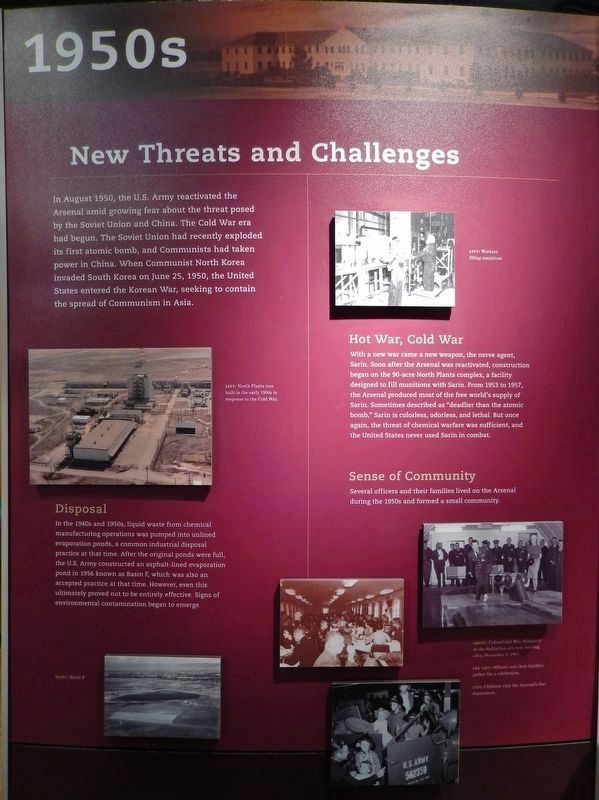 Photographed By Cosmos Mariner, June 27, 2018
7. New Threats and Challenges (interpretive panel inside Rocky Mountain Arsenal Visitor Center)
In August 1950, the U.S. Army reactivated the Arsenal amid growing fear about the threat posed by the Soviet Union and China. The Cold War era had begun. The Soviet Union had recently exploded its first atomic bomb, and Communists had taken power in China. When Communist North Korea invaded South Korea on June 25, 1950, the United States entered the Korean War, seeking to contain the spread of Communism in Asia.

Disposal
In the 1940s and 1950s, liquid waste from chemical manufacturing operations was pumped into unlined evaporation ponds, a common industrial disposal practice at that time. After the original ponds were full, the U.S. Army constructed an asphalt-lined evaporation pond in 1956 known as Basin F, which was also an accepted practice at that time. However, even this ultimately proved not to be entirely effective. Signs of environmental contamination began to emerge.

Hot War, Cold War
With a new war came a new weapon, the nerve agent, Sarin. Soon after the Arsenal was reactivated, construction began on the 90-acre North Plants complex, a facility designed to fill munitions with Sarin. From 1953 to 1957, the Arsenal produced most of the free world's supply of Sarin. Sometimes described as "deadlier than the atomic bomb," Sarin is colorless, odorless, and lethal. But once again, the threat of chemical warfare was sufficient, and the United States never used Sarin in combat.

Sense of Community
Several officers and their families lived on the Arsenal during the 1950s and formed a small community. 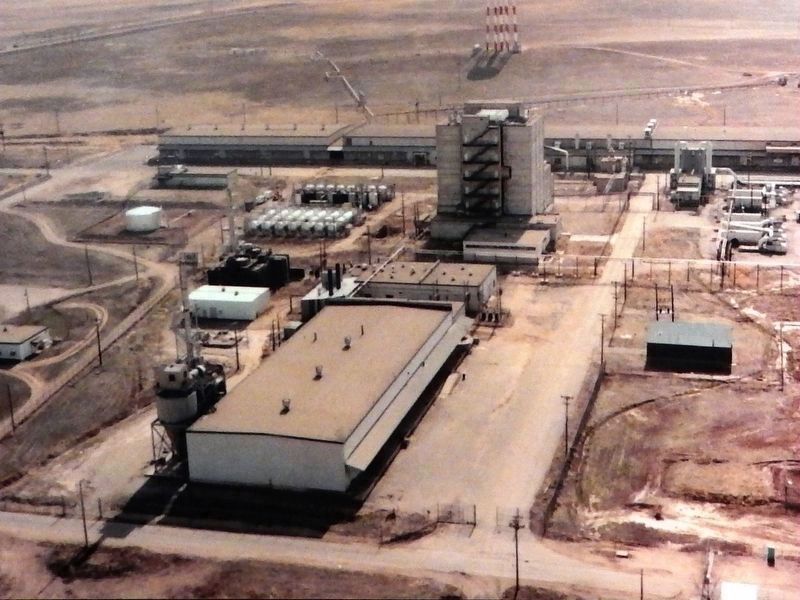 Photographed By Cosmos Mariner, June 27, 2018
8. Rocky Mountain Arsenal: North Plants
North Plants was built in the early 1950s in response to the Cold War. This bleak, highly-secured facility is where thousands upon thousands of bomb casings were loaded with nerve agent during the 1950s. It is also where these same bomb casings were unloaded as part of the nerve agent detoxification process during the 1970s. Some workers here literally spent the first half of their 30-to-40-year career creating these grim munitions and the second half of their career dismantling the same munitions. 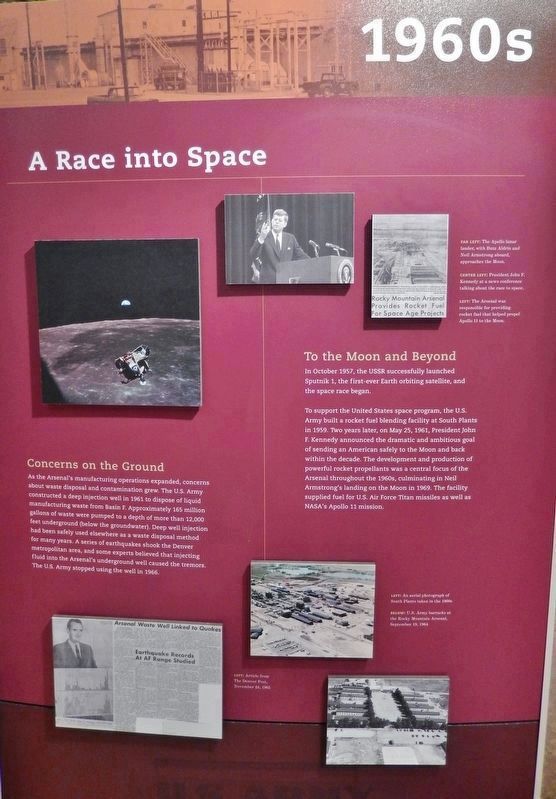 Photographed By Cosmos Mariner, June 28, 2018
9. A Race into Space (interpretive panel inside Rocky Mountain Arsenal Visitor Center)
Concerns on the Ground
As the Arsenal's manufacturing operations expanded, concerns about waste disposal and contamination grew. The U.S. Army constructed a deep injection well in 1961 to dispose of liquid manufacturing waste from Basin F. Approximately 165 million gallons of waste were pumped to a depth of more than 12,000 feet underground (below the groundwater). Deep well injection had been safely used elsewhere as a waste disposal method for many years. A series of earthquakes shook the Denver metropolitan area, and some experts believed that injecting fluid into the Arsenal's underground well caused the tremors. The U.S. Army stopped using the well in 1966.

To the Moon and Beyond
In October 1957, the USSR successfully launched Sputnik 1, the first-ever Earth orbiting satellite, and the space race began. To support the United States space program, the U.S. Army built a rocket fuel blending facility at South Plants in 1959. Two years later, on May 25, 1961, President John F. Kennedy announced the dramatic and ambitious goal of sending an American safely to the Moon and back within the decade. The development and production of powerful rocket propellants was a central focus of the Arsenal throughout the 1960s, culminating in Neil Armstrong's landing on the Moon in 1969. The Arsenal was responsible for providing rocket fuel that helped propel Apollo 11 to the Moon. The facility supplied fuel for U.S. Air Force Titan missiles as well.
Credits. This page was last revised on October 21, 2020. It was originally submitted on June 27, 2018, by Cosmos Mariner of Cape Canaveral, Florida. This page has been viewed 346 times since then and 108 times this year. Photos:   1, 2, 3, 4, 5, 6. submitted on June 27, 2018, by Cosmos Mariner of Cape Canaveral, Florida.   7, 8, 9. submitted on August 8, 2018, by Cosmos Mariner of Cape Canaveral, Florida. • Syd Whittle was the editor who published this page.
Share this page.