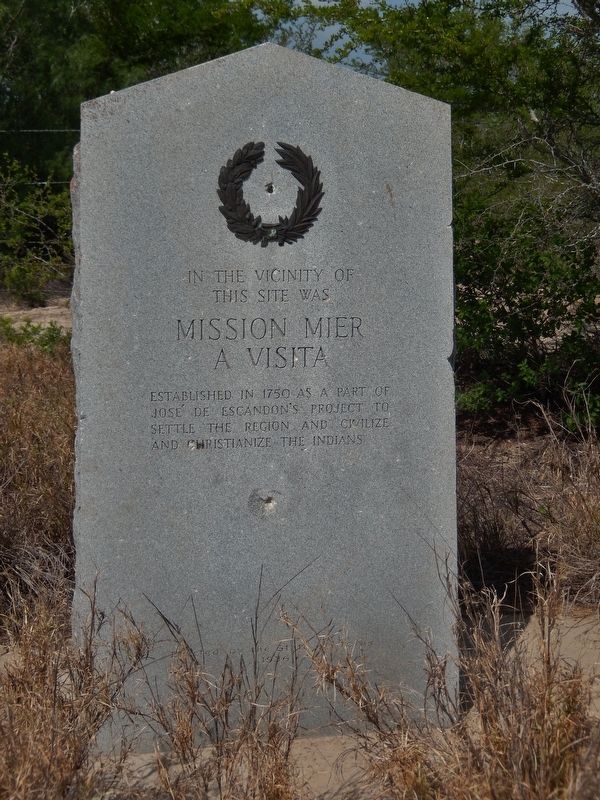 In the vicinity of
this site was

Established in 1750 as a part of
José de Escandón’s project to
settle the region and civilize
and Christianize the Indians.

Topics and series. This historical marker is listed in these topic lists: Churches & Religion • Colonial Era • Hispanic Americans • Settlements & Settlers. In addition, it is included in the Texas 1936 Centennial Markers and Monuments series list. A significant historical year for this entry is 1750.

Other nearby markers. At least 5 other markers are within 13 miles of this marker, measured as the crow

Also see . . .
1. José de Escandón. José de Escandón is known as the colonizer and first governor of the colony of Nuevo Santander, which extended from the Pánuco River in Mexico to the Guadalupe River in Texas. He founded over twenty towns or villas and a number of missions in the colony, including Camargo, Reynosa, Mier, and Revilla south of the Rio Grande and Laredo and Nuestra Señora de los Dolores Hacienda north of the Rio Grande. For his colonization efforts Escandón is sometimes called the "father" of the lower Rio Grande valley. (Submitted on June 29, 2018, by Cosmos Mariner of Cape Canaveral, Florida.)

2. The Spanish Missions in Texas. In 1749, in a major colonizing effort along the Rio Grande, four towns were founded on the south bank of the river in Mexico: Reynosa, Camargo, Mier and Revilla (now Guerrero). Some time later, the missions in these settlements all established outposts on the Texas side when some of the settlers began to move across the river. These outposts were visitas and took their names from those missions. A visita was a kind of country chapel that was visited by the priests for Mass or to administer sacraments. The Mexican city of Mier was the site of the mission La Purísima Concepción, and across the river in present-day Starr County was Mission Mier a Visita, begun sometime in the mid-1750s (Submitted on June 29, 2018, by Cosmos Mariner of Cape Canaveral, Florida.)
Credits. This page was last revised on July 4, 2018. It was originally submitted on June 29, 2018, by Cosmos Mariner of Cape Canaveral, Florida. This page has been viewed 265 times since then and 58 times this year. Photos:   1, 2. submitted on June 29, 2018, by Cosmos Mariner of Cape Canaveral, Florida. • Andrew Ruppenstein was the editor who published this page.
Share this page.