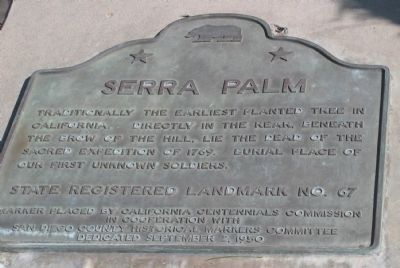 Photographed By Syd Whittle, March 18, 2006
1. Serra Palm Marker
Inscription.
Serra Palm. . Traditionally the earliest planted tree in California. Directly in the rear, beneath the brow of the hill, lie the dead of the sacred expedition of 1769. Burial place of our first unknown soldiers. . This historical marker was erected in 1950 by The California Centennials Commission in cooperation with San Diego County Historical Markers Committee, September 2, 1950.. It is in San Diego in San Diego County California

Traditionally the earliest planted tree in California. Directly in the rear, beneath the brow of the hill, lie the dead of the sacred expedition of 1769. Burial place of our first unknown soldiers.

Topics and series. This historical marker is listed in these topic lists: Cemeteries & Burial Sites • Colonial Era • Exploration. In addition, it is included in the California Historical Landmarks, the E Clampus Vitus, and the Portolá Expedition series lists. A significant historical year for this entry is 1769. 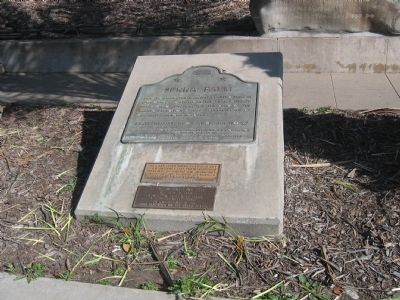 Regarding Serra Palm. This site has been designated as California Registered Historical Landmark No.67

Site of the palm planted in 1769 by Padre Junípero Serra when he arrived at San Diego. Here the four divisions of the Portolá Expedition met on July 1, 1769. The famous 'El Camino Real,' most celebrated trail in California, begins here. 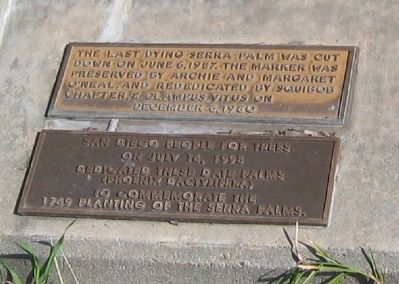 Photographed By Syd Whittle, March 18, 2006
3. Markers Under Main Marker
First Marker
The last dying Serra Palm was cut down on June 6, 1957. The marker was preserved by Archie and Margaret O'Neal, and rededicated by Squibob Chapter, E Clampus Vitus on December 6, 1980.
Second Marker
San Diego People for Trees on July 16, 1995 dedicated these Date Palms to commemorate the 1769 planting of the Serra Trees.

San Diego Historical Society
4. Serra Palm
From the Serra Palm site, "El Camino Real," the most celebrated trail in California begins. Also from this, "Spanish Camp," Governor Gaspar de Portolá set out on July 14, 1769, in a vain search for the port of Monterey. This early photo of the Serra Palms was donated by Mr. and Mrs. George C. Jessop, Jr., to the San Diego Historical Society. (http://www.sandiegohistory.org/journal/68july/images.htm) 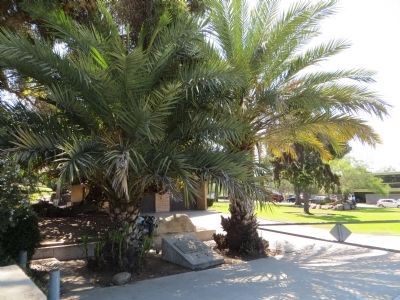