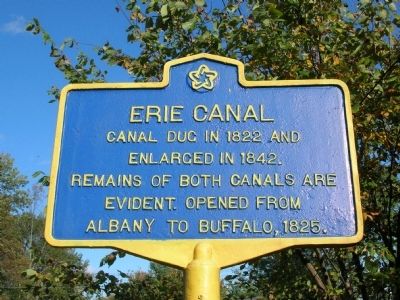 Topics and series. This historical marker is listed in these topic lists: Man-Made Features • Notable Places • Waterways & Vessels. In addition, it is included in the Erie Canal series list. A significant historical year for this entry is 1822. 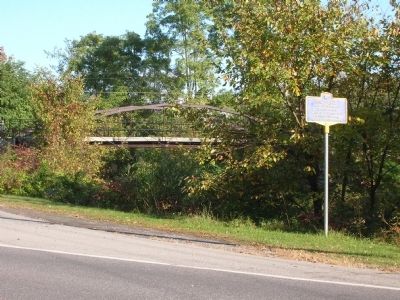 Regarding Erie Canal. The Town of Clifton Park and the New York State Department of Transportation (NYS DOT) created the 400+ acre Vischer Ferry Nature and Historic Preserve in the fall of 1977. It features a wetland eco-system, Erie Canal remains, and the site of the town's first settlement, and include the following:

From the Erie Canal there are remains of both the 1822 Canal and the later 1842 Enlarged Canal, Clute's Dry Dock, Canal Lock 19, and an 1869 Cast Iron Whipple Truss Bridge.

Canal Remains
There are hiking tails in the preserve that follow the tow paths of both "Clinton's Ditch", dug here in 1822 (4 feet deep and 40 feet wide) and the Enlarged canal dug here in 1842 ( 7 feet deep and 70 feet wide.) When the canal was enlarged several sections were shortened with a result that in those places the old canal and the new canal are side by side. There are a number of places along the towpath trail where there are remains of farmer's bridge abutments and home foundations. After the canal closed in 1917 a lot of these stones where seen as fair game to be used in local buildings, thus

Photographed By Google Earth Image
3. The Erie Canal in Vischer Ferry Nature and Historic Preserve
The Erie Canal marker states that remains from both the original "Clinton's Ditch", dug here in 1822, and the "Enlarged Canal", dug 20 years later in 1842, are Evident. These remains are well illustrated in the aerial view of this section of the preserve.
most are incomplete.

Whipple Truss Bridge
The main entrance to the Preserve features an 1869 cast iron Whipple Truss Bridge. It was originally erected over the Erie Canal at Fultonville, and is typical of canal bridges that once crossed the canal across New York State. When the canal closed in 1917 the bridge was moved to the Cayuduta Creek in Fonda where it served as a private farm bridge. In 1997 a group from Union College dismantled the bridge, restored it and with the Town of Clifton Park erected the bridge at its present location where a similar bridge once stood. The bridge stands on the original abutments of the original bridge at this site, made somewhat higher with additional stonework from the dismantled Rexford Aqueduct.

Lock 19
Lock 19, a double chamber lock, was constructed in 1842 to replace Lock 32, a single chamber lock built at this site in 1822. The 1825 canal locks were not numbered consecutively from East to West like the enlarged Erie, they started numbering from the begining in Rome. The stonework was quarried in Rotterdam Junction. In 1885 the chamber on the berm side was lengthened. In 1875 an average of 95 boats-a-day entered Lock 19 during the 197 days the canal was open that year.

Clute's Dry Dock
Probably opened about the time the canal opened in 1825, Clute's dry dock was 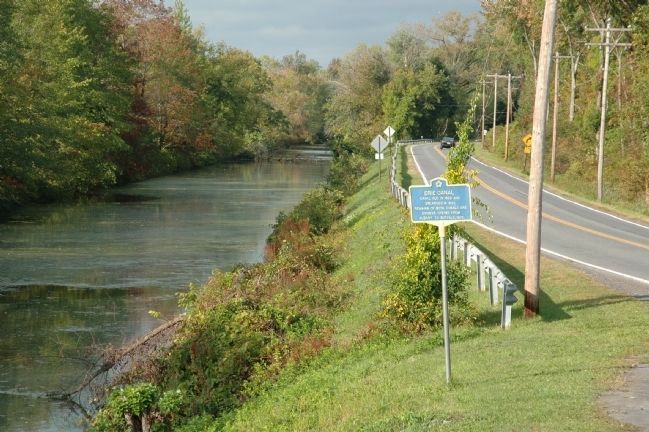 Photographed By Howard C. Ohlhous, September 22, 2012
4. The Erie Canal & Erie Canal Marker
originally run by the Volvyder's family. The dry dock, where boats were built and repaired, was likely enlarged when the canal was in 1842. By 1852 Nicholas J. Clute was running the dry dock. The Clutes had a nearby home and store which they built. There was a sizable community until about 1900 when boat traffic died down. In 1907 the Mohawk River was dammed up to create the barge canal and much of the area was flooded. A couple of homes were moved to higher ground. Today the dry dock serves as a canoe launch for folks who paddle around in the old Erie Canal.