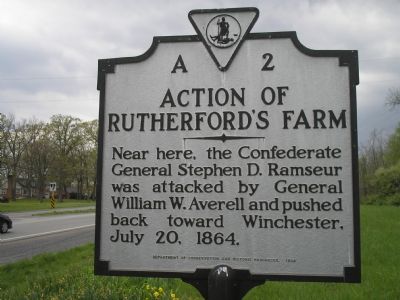 Photographed By Bill Coughlin, April 28, 2007
1. Action of Rutherford's Farm Marker
Inscription.
Action of Rutherford’s Farm. . Near here, the Confederate General Stephen D. Ramseur was attacked by General William W. Averell and pushed back toward Winchester, July 20, 1864. . This historical marker was erected in 1988 by Department of Conservation and Historic Resources. It is Near Winchester in Frederick County Virginia

Near here, the Confederate General Stephen D. Ramseur was attacked by General William W. Averell and pushed back toward Winchester, July 20, 1864.

Erected 1988 by Department of Conservation and Historic Resources. (Marker Number A-2.)

Topics and series. This historical marker is listed in this topic list: War, US Civil. In addition, it is included in the Virginia Department of Historic Resources series list. A significant historical date for this entry is July 20, 1743. 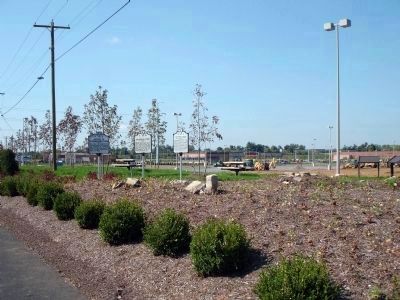 October 4, 2008
2. Action of Rutherford’s Farm Marker
After being down for nearly a year while the road easements were under construction, the Action at Rutherford's Farm marker is on the left in this trio of markers.

Regarding Action of Rutherford’s Farm. This marker replaced a previous marker also numbered A-2, stood at this site, but was named Action of Carter's Farm. It read: Near here the Confederate General Ramseur was attacked by Averell and pushed back toward Winchester, July 20, 1864. The marker commemorates the same action, just by a different name.

2. Battle Summary of Rutherford's Farm. The action here followed the battle at Cool Springs, and preceded the Second Battle of Kernstown. All three actions were part of Federal pursuits of Confederate General Jubal Early following his daring raid on Washington. (Submitted on October 25, 2007, by Craig Swain of Leesburg, Virginia.) 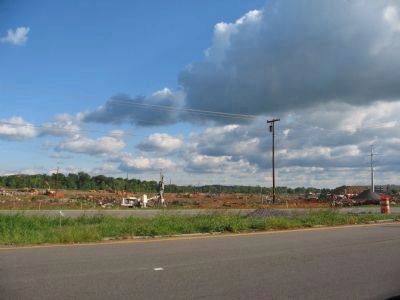 Photographed By Craig Swain, September 15, 2007
3. Rutherford's Farm
Photo taken while the marker was down for maintenance, and before construction work was completed. Where the construction equipment is located in this photo, Lewis's brigade of Ramseur's division stood facing Averell's Federals. Averell flanked Ramseur's line to the north, where I-81 now passes.
Credits. This page was last revised on June 10, 2021. It was originally submitted on October 25, 2007, by Craig Swain of Leesburg, Virginia. This page has been viewed 2,751 times since then and 48 times this year. Last updated on October 5, 2008. It was the Marker of the Week October 5, 2008. Photos:   1. submitted on November 16, 2007, by Bill Coughlin of Woodland Park, New Jersey.   2. submitted on October 4, 2008.   3. submitted on October 25, 2007, by Craig Swain of Leesburg, Virginia.
Share this page.