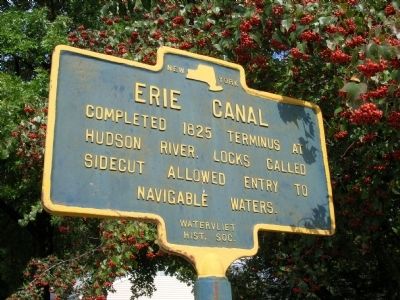 Topics and series. This historical marker is listed in these topic lists: Industry & Commerce • Man-Made Features • Notable Places • Waterways & Vessels. In addition, it is included in the Erie Canal series list. A significant historical year for this entry is 1825. 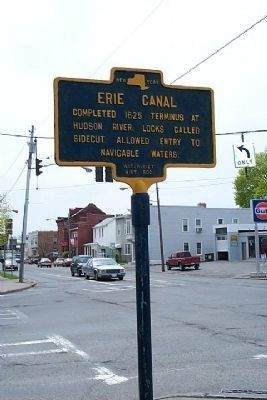 Regarding Erie Canal. Construction of the Erie Canal began on July 4th, 1817, and the canal was officially opened on October 26, 1825. It was 363 miles long, from Albany to Buffalo with 83 locks and 18 aqueducts.

The question of where to locate the eastern terminal of the Erie Canal provoked great controversy between the cities of Albany and Troy. The route which was finally selected went from Schenectady to Cohoes and then south along the west bank of the Hudson River to Albany. This plan to have the last stretch of the canal terminate in Albany and thus by-pass the city of Troy absolutely infuriated the Troy business community.

In order to provide equally convenient access to the Erie Canal for Troy commerce and west-bound freight that did not need to stop at the Port of Albany, a short lateral canal was constructed to connect the City of West Troy (now Watervliet) with the tide waters of the Hudson River. This short cut (Side Cut) to the Erie Canal ran about where present day 23rd Street is. 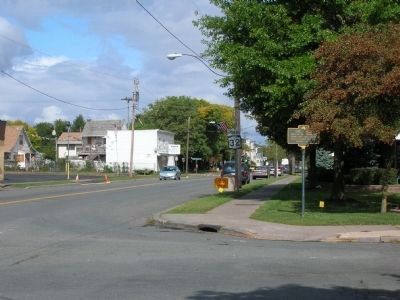 Photographed By Howard C. Ohlhous, October 2, 2008
3. Erie Canal Marker
View is to the North looking along Route 32 in Watervliet, NY.
location of the Erie Canal marker is near the former West Troy Side-cut. The West Troy Side Cut was also known as the "Upper Side cut" since there was also a Lower Side cut located just south of the Watervliet Arsenal. The character of the neighborhoods surrounding these side cuts earned it the nickname of "Barbary Coast of the East" (Buffalo being the "Barbary Coast of the West"). Since the Canalers were paid at the end of their trip they often had money in their pockets and a few days off to go looking for a good time. There were more than 25 saloons within two blocks of the side cut locks. Paddy Ryan, a famous prize fighter, began his boxing career at the side-cut. He worked as a lock tender, and also owned a saloon nearby. In 1880, he defeated the English Champion, Joe Goss, in a memorable 86-round match, and earned the titles, "King of the Erie Canal" and "World Champion". 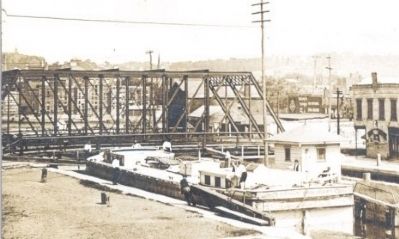 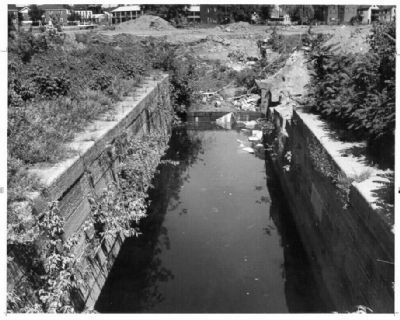 New York State Office of Parks Recreation & Historic Preservation, 1970
5. Remains of the West Troy Side Cut Locks
This photo was taken of the remains of one of the locks of the West Troy Side Cut in 1970 for documentation that was submitted to nominate the site for National Registger of Historic Places status, which it attained in 1971. These remains were reportedly filled in and covered up for preservation at that time. 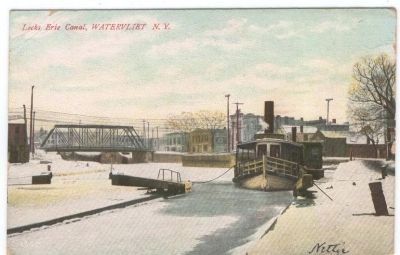