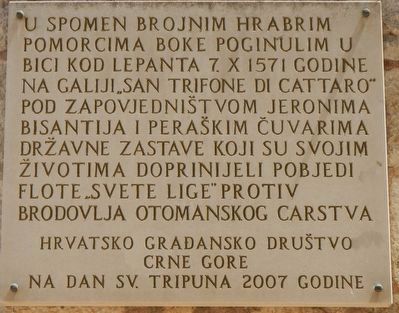 Photographed By Barry Swackhamer, July 24, 2018
1. Battle of Lepanto Marker
Inscription.
English translation: , In memory of numerous courageous sailors, who died in the Battle of Lepanto on the 7th of October, 1571, in the "San Trifone di Cattaro" galleon under the command of the Bishops of Jerusalem and the flag of the state of Perugia, who contributed their victories to the victory of the fleet of the "Holy League" against ships of the Ottoman Empire. , Croatian Civil Society , on the day of St. Tripuna 2007 . This historical marker was erected in 2007. It is in Kotor Kotor Municipality Montenegro