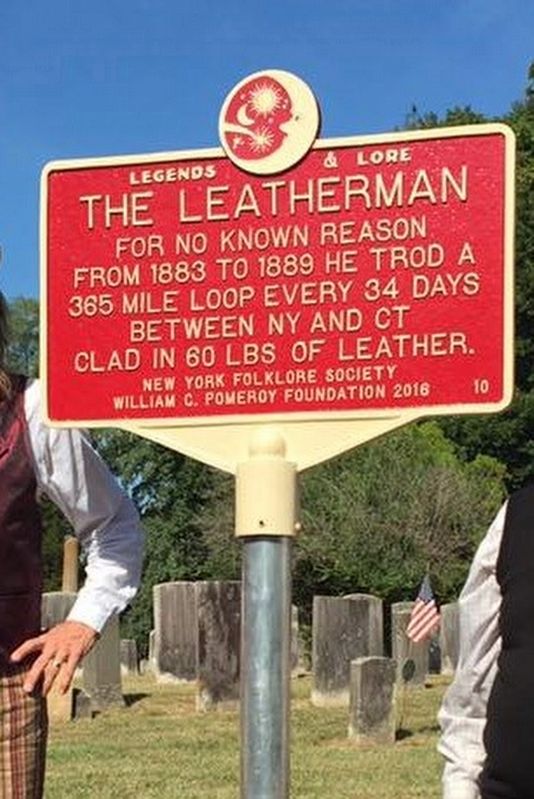 September 19, 2016
1. The Leatherman Marker
Inscription.
The Leatherman. . For no known reason from 1883 to 1889 he trod a 365 mile loop every 34 days between NY and CT clad in 60 lbs of leather. . This historical marker was erected in 2016 by William G. Pomeroy Foundation. It is in Ossining in Westchester County New York

Topics and series. This historical marker is listed in this topic list: Anthropology & Archaeology. In addition, it is included in the William G. Pomeroy Foundation Legends & Lore Series series list.

Other nearby markers. At least 8 other markers are within 2 miles of this marker, measured as the crow flies. Sparta Cemetery (about 300 feet away, measured in a direct line); Birthplace of John L. Worden 1818-1897 (approx. ¼ mile away); The Smith-Robinson House / La Casa Smith-Robinson (approx. 1.4 miles away); The James Robinson House / La Casa James Robinson (approx. 1½ miles away); The United Methodist Church / La Iglesia Metodista Unida

Also see . . .  Leatherman (vagabond) (Wikipedia). "The Leatherman (ca. 1839–1889) was a particular vagabond, famous for his handmade leather suit of clothes, who traveled a circuit between the Connecticut River and the Hudson River, roughly from 1857 to 1889. Of unknown origin, he was thought to be French-Canadian, because of his fluency in the French language, his "broken English", and the French-language prayer book found on his person after his death. His identity remains unknown, and controversial. He walked a 365-mile route year after year. His repeating route took him to certain towns in western Connecticut and eastern New York, returning to each town every 34–36 days." (Submitted on December 21, 2018.)
Credits. This page was last revised on February 6, 2022. It was originally submitted on December 19, 2018, by Deryn Pomeroy of Syracuse, New York. This page has been viewed 338 times since then and 6 times this year. Photo   1. submitted on December 19, 2018, by Deryn Pomeroy of Syracuse, New York. • Andrew Ruppenstein was the editor who published this page.