Position of the Monitors 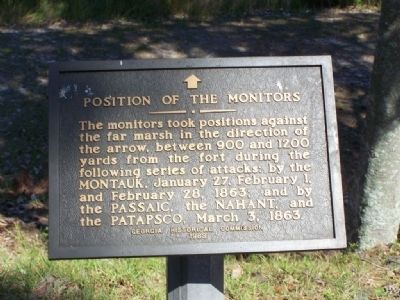 By Mike Stroud, October 5, 2008
1. Position of the Monitors Marker
Inscription.
Position of the Monitors. . The monitors took positions against the far marsh in the direction of the arrow, between 900 and 1200 yards from the fort during the following series of attacks: by the MONTAUK, January 27, February 1, and February 28, 1863; and by the PASSAIC, the NAHANT, and the PATAPSCO, March 3, 1863. . This historical marker was erected in 1963 by Georgia Historical Commission. It is in Richmond Hill in Bryan County Georgia

The monitors took positions against the far marsh in the direction of the arrow, between 900 and 1200 yards from the fort during the following series of attacks: by the MONTAUK, January 27, February 1, and February 28, 1863; and by the PASSAIC, the NAHANT, and the PATAPSCO, March 3, 1863.

Topics. This historical marker is listed in these topic lists: Forts or Castles • War, US Civil • Waterways & Vessels. 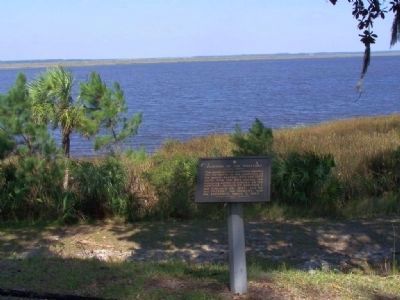 By Mike Stroud, 2008
2. Position of the Monitors on the Ogeechee River
During the bombardment, the U.S.S. Montauk steamed within 150 yards of the river pilings in front of Fort McAllister, its belching cannon plowing gaping holes in the fort’s defenses. During the attack, Fort McAllister would be reportedly struck by over 450 cannon balls, each being absorbed by the fort’s earth and sod embankments. Confederate gunners found their mark on the iron hull of the U.S.S. Montauk 15 times during the battle, but the ships armor deflected the rounds without significant damage or casualties. At the same time, the hardened defenders of Fort McAllister also reported no casualties or significant damage as a result of feverish Union shelling. At the end of the engagement, he U.S.S. Montauk and the remaining Federal Fleet steamed away, vowing to return.
(within shouting distance of this marker); Major Gallie's Gun (within shouting distance of this marker); Confederate Land Mines (about 300 feet away, measured in a direct line); Tom Cat (approx. 0.2 miles away). Touch for a list and map of all markers in Richmond Hill.

Also see . . .  Haunted Forts - Ft MCallister. On February 1, 1863, the U.S.S. Montauk and several wooden support craft returned to Fort McAllister determined to win the day. During the first attack, both sides traded numerous volleys of cannon fire with pretty much the same results as experienced in the previous attack in January 1863. It was reported that the U.S.S. Montauk was struck 48 times during this engagement, causing little more that slight dents and dings in the ship's armor. (Submitted on October 21, 2008, by Mike Stroud of Bluffton, South Carolina.) 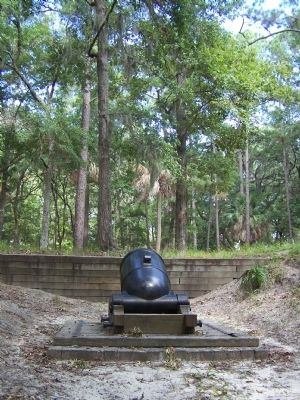