Test of a New Nation 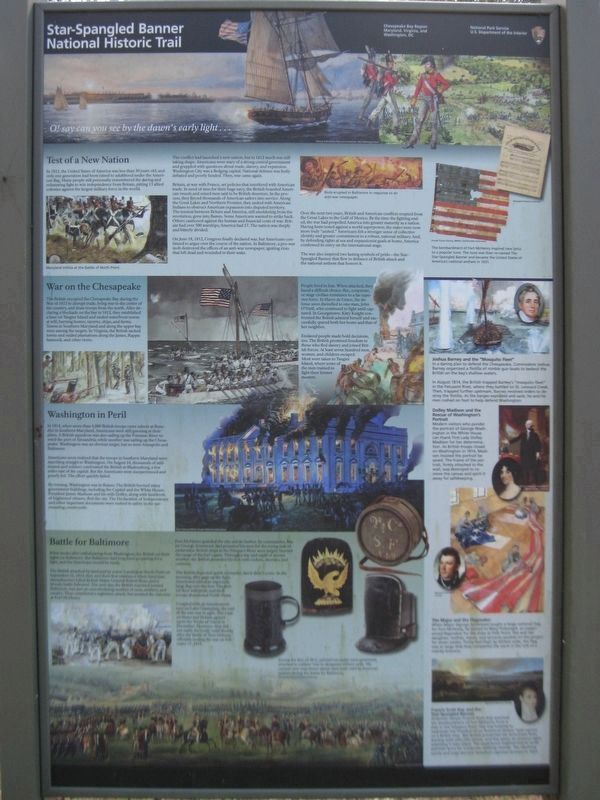 In 1812, the United States of America was less than 30 years old, and only one generation had been raised to adulthood under the American flag. Many people still personally remembered the daring and exhausting fight to win independence from Britain, pitting 13 allied colonies against the largest military force in the world.

The conflict had launched a new nation, but in 1812 much was still taking shape. Americans were wary of a strong central government and grappled with questions about trade, slavery, and expansion. Washington City was a fledging capital. National defense was hotly debated and poorly funded. Then war came again.

Britain, at war with France, set policies that interfered with American trade. In need of men for their huge navy, the British boarded American vessels and seized men said to be British deserters. In the process, they forced thousands of American sailors into service. Along the Great Lake and Northern Frontier, they united with American Indians to obstruct American expansion into disputed territory. The tension between Britain and America, still smoldering from the revolution, grew into flames. 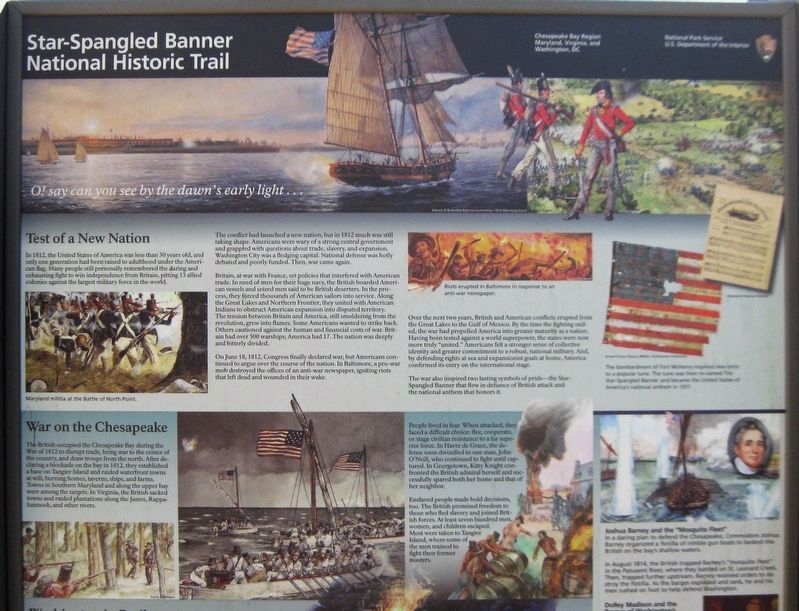 Click or scan to see
this page online
Some Americans wanted to strike back. Others cautioned against the human and financial costs of war. Britain had over 500 warships; America had 17. The nation was deeply and bitterly divided.

On June 18, 1812, Congress finally declared war, but Americans continued to argue over the course of the nation. In Baltimore, a pro-war mob destroyed the offices of an anti-war newspaper, igniting riots that left dead and wounded in their wake.

Over the next two years, British and American conflicts erupted from the Great Lakes to the Gulf of Mexico. By the time that fighting ended, the war had propelled America into greater maturity as a nation. Having been tested against a world superpower, the states were now more truly "united." Americans felt a stronger sense of collective identity and greater commitment to a robust, national military. And, by defending rights at sea and expansionist goals at home, America confirmed its entry on the international stage.

The war also inspired lasting symbols of pride—the Star-Spangled Banner that flew in defiance of British attack and the national anthem that honor it.

War on the Chesapeake
The British occupied the Chesapeake Bay during the War of 1812 to disrupt trade, bring war to the center of the country, and draw troops from the north. After declaring a blockade on the bay in 1812, they 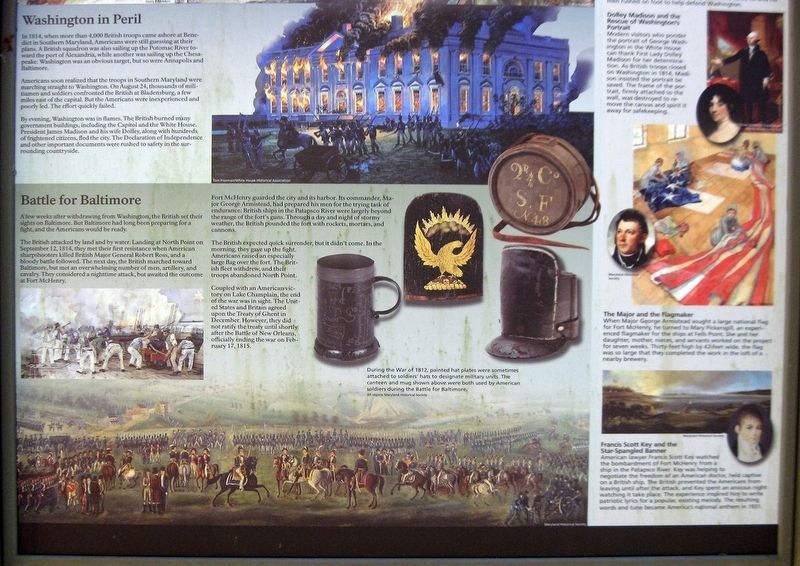 National Park Service, Thomas Stone National Historic Site, October 13, 2018
3. Lower half of the Test of a New Nation Marker
established a base on Tangier Island and raided waterfront towns at will, burning homes, taverns, ships, and farms. Towns in Southern Maryland and along the upper bay were among the targets. In Virginia, the British sacked towns and raided plantations along the James, Rappahannock, and other rivers.

People lived in fear. When attacked, they faced a difficult choice: flee, cooperate, or stage civilian resistance to a far superior force. In Harve de Grace, the defense soon dwindled to one man, John O'Neill, who continued to fight until captured. In Georgetown, Kitty Knight confronted the British admiral herself and successfully spared both her home and that of her neighbor.

Enslaved people made bold decisions, too. The British promised freedom to those who fled slavery and joined British forces. At least seven hundred men, women, and children escaped. Most were taken to Tangier Island, where some of the men trained to fight their former masters.

Washington in Peril
In 1814, when more than 4,000 British troops came ashore at Benedict in Southern Maryland, Americans were still guessing at their plans. A British squadron was also sailing up the Potomac River toward the port of Alexandria, while another was sailing up the Chesapeake. Washington was an obvious target, but so were Annapolis and Baltimore. 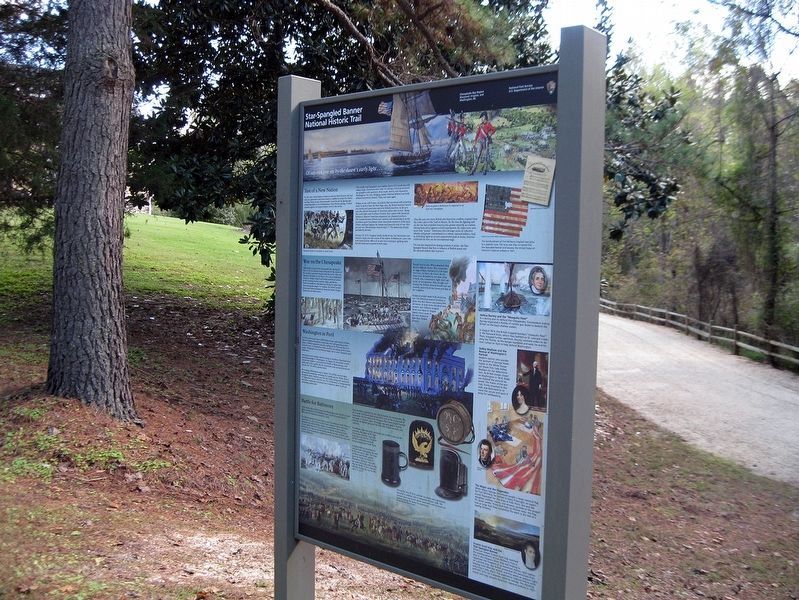 National Park Service, Thomas Stone National Historic Site, October 13, 2018
4. Test of a New Nation Marker
the troops in Southern Maryland were marching straight to Washington. On August 24, thousands of militiamen and sailors confronted the British at Bladensburg, a few miles east of the capital. But the Americans were inexperienced and poorly led. The effort quickly failed.

By evening, Washington was in flames. The British burned many government buildings, including the Capital and the White House. President James Madison and his wife Dolley, along with hundreds of frightened citizens, fled the city. The Declaration of Independence and other important documents were rushed to safety in the surrounding countryside.

Battle for Baltimore
A few weeks after withdrawing from Washington, the British set their sights on Baltimore. But Baltimore had long been preparing for a fight, and the Americans would be ready.
The British attacked by land and by water. Landing at North Point on September 17, 1814, they met their first resistance when American sharpshooters killed British Major General Robert Ross, and a bloody battle followed. The next day, the British marched toward Baltimore, but met an overwhelming number of men, artillery, and cavalry. They considered a nighttime attack, but awaited the outcome at Fort McHenry.

Fort McHenry guard the city and its harbor. Its commander, Major George Armistead, had prepared his men for the trying task 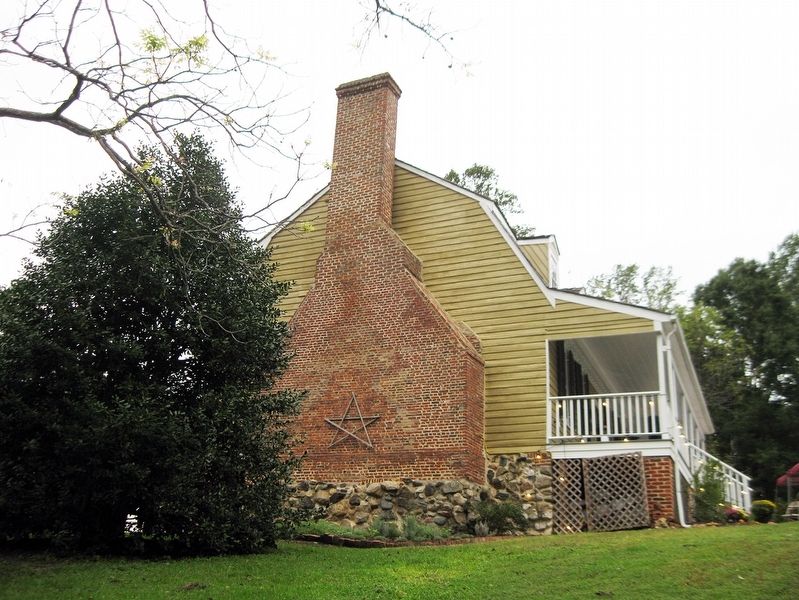 National Park Service, Thomas Stone National Historic Site, October 13, 2018
5. Maxwell Hall Exterior
of endurance: British ships in the Patapsco River were largely beyond the range of the fort’s guns. Through a day and night of stormy weather, the British pounded the fort with rockets, mortars, and cannons.

The British expected quick surrender, but it didn’t come. In the morning, they gave up the fight. Americans raised an especially large flat over the fort. The British fleet withdrew, and their troops abandoned North Point.

Coupled with an American victory on Lake Champlain, the end of the war was in sight. The United States and Britain agreed upon the Treaty of Ghent in December. However, they did not ratify the treaty until shortly after the Battle of New Orleans, officially ending the war on February 17, 1815.

(Image of riot)
Riots erupted in Baltimore in response to an anti-war newspaper.

Joshua Barney and the “Mosquito Fleet”
In a daring plan to defend the Chesapeake, Commodore Joshua Barney organized a flotilla of nimble gun boats to bedevil the British on the bay’s shallow waters.

In August 1814, the British trapped Barney’s 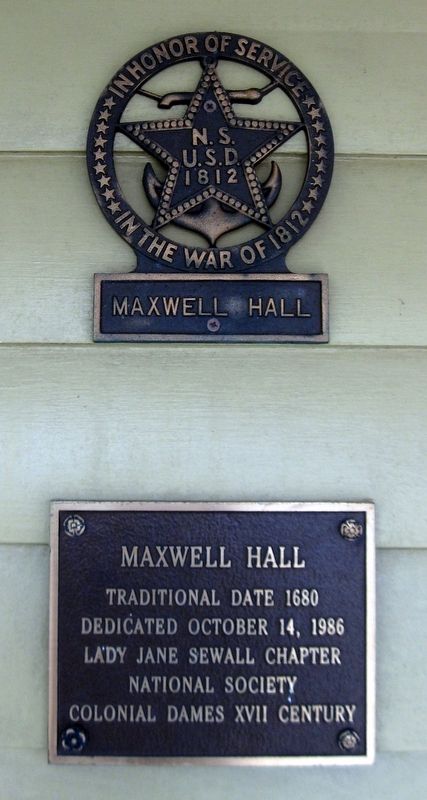 By David Lassman, October 13, 2018
6. Markers on the front porch of the house.
Top: The National Society United States Daughters of 1812 Bottom: The National Society Colonial Dames XVII Century
“mosquito fleet” in the Patuxent River, where they battled on St. Leonard Creek. Then, trapped further upstream, Barney received order to destroy the flotilla. As the barges exploded and sank, he and his men rushed on foot to help defend Washington.

The Major and the Flagmaker
When Major George Armistead sought a large national flag for Fort McHenry, he turned to Mary Pickensgill, an experience flagmaker for the ships of Fells Point. She and her daughter, mother, nieces, and servants worked on the project for seven weeks. Thirty-feet high by 42-feet wide, the flag was so large that they completed the work in the loft of a nearby brewery.

Francis Scott Key and the Star-Spangled Banner
American lawyer Francis Scott Key watched the bombardment of Fort McHenry from a ship in the Patapasco River. Key was helping to negotiate the freedom of an American doctor, held captive on a British ship. The British prevented the Americans from leaving until after the attack, and Key spent an anxious night watching it take place. The experience inspired him to write patriotic lyrics for a popular, existing melody. The resulting words and tune became America’s national anthem in 1931.

Topics and series. This historical marker is listed in these topic lists: Parks & Recreational Areas • War of 1812 • Waterways & Vessels. In addition, it is included in the Former U.S. Presidents: #04 James Madison series list. A significant historical date for this entry is June 18, 1812.

Location. 38° 32.083′ N, 76° 42.017′ W. Marker is in Hughesville, Maryland, in Charles County. Marker can be reached from Teagues Point Road 0.1 miles north of Fairfax Court. When traveling northwest on Point Teagues Road, the entrance to Maxwell Hall will be on the left. Follow access road for 1/4 mile. Take the left branch at the split. The marker will be immediately on the right. Touch for map. Marker is at or near this postal address: 17388 Teagues Point Road, Hughesville MD 20637, United States of America. Touch for directions.

More about this marker. Note: Site is commonly closed, which means that access to the marker is limited.