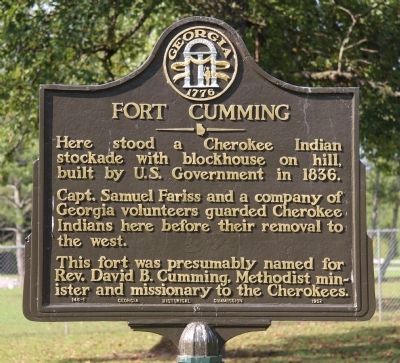 Here stood a Cherokee Indian stockade with blockhouse on hill, built by U.S. Government in 1836.

Capt. Samuel Fariss and a company of Georgia volunteers guarded Cherokee Indians here before their removal to the west.

Topics and series. This historical marker is listed in these topic lists: Forts and Castles • Native Americans • Wars, Non-US. In addition, it is included in the Georgia Historical Society, and the Trail of Tears series lists. A significant historical year for this entry is 1836.

Other nearby markers. At least 8 other markers are within walking distance of this marker. Marsh-Warthen House (approx. 0.6 miles away); African American Pioneers of the Marsh-Warthen-Clements House On December 29, 1835, at New Echota, the capital of the Cherokee Nation, some of the Cherokee leaders signed a treaty with the U.S. government agreeing to the removal of all Cherokees to the West. The Native Americans who signed the treaty also agreed to relinquish all Cherokee lands east of the Mississippi River.

The U.S. Senate ratified the treaty on May 23, 1836, and the Cherokees were given two years to leave Georgia. Many Cherokees did not recognize the New Echota Treaty and refused to leave their homes. Gen. Winfield Scott was charged with gathering together the Cherokees and removing them 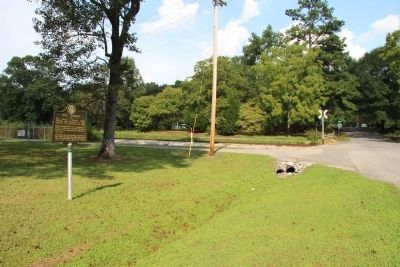 The fort was a large enclosure of upright logs with a rifle tower in each corner. No photos or drawings of the structure have been found. The stockade with block house was built on a hill just above the area now known as Big Spring. Today the site is near the west end of Indiana Avenue.

(Source: James A Sartain’s History of Walker County, 1932, and This is Your Georgia, 1977, by Bernice McCullar and Sibley Jennings.)

Also see . . .  Wikipedia entry for the Trail of Tears. The "removal to the west" mentioned on the marker was later referred to as the "Trail of Tears." (Submitted on October 24, 2008, by David Seibert of Sandy Springs, Georgia.) 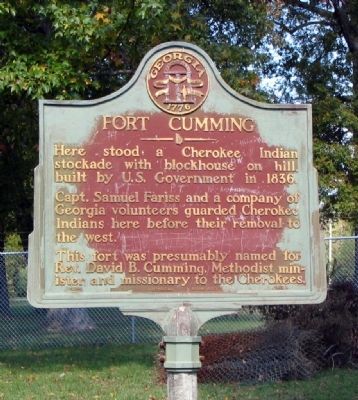 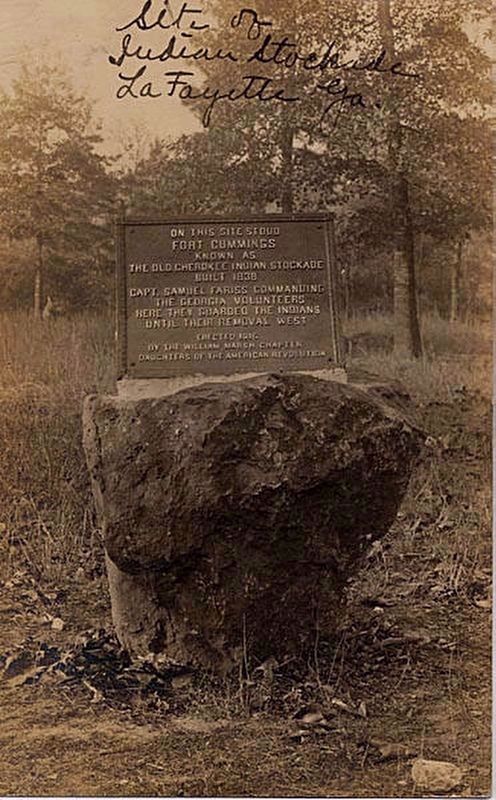