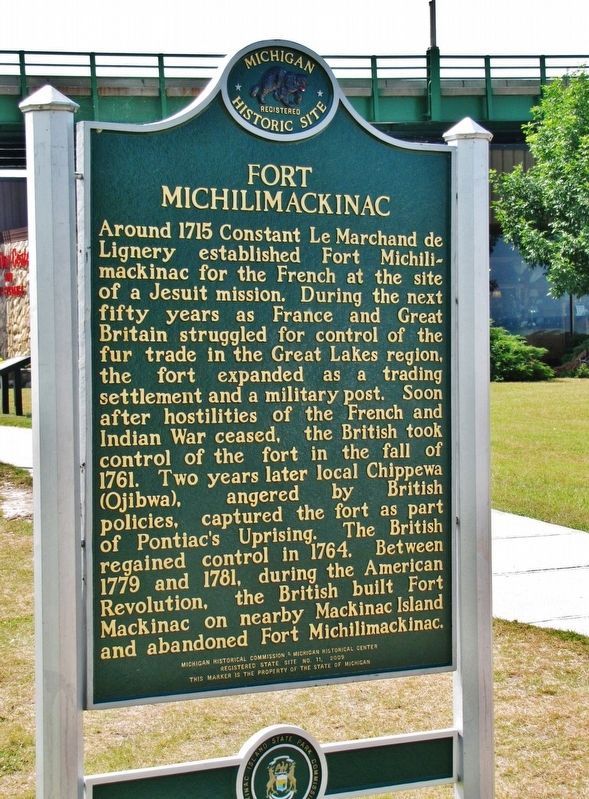 Fort Michilimackinac
Around 1715 Constant Le Marchand de Lignery established Fort Michilimackinac for the French at the site of a Jesuit mission. During the next fifty years as France and Great Britain struggled for control of the fur trade in the Great Lakes region, the fort expanded as a trading settlement and a military post. Soon after hostilities of the French and Indian War ceased, the British took control of the fort in the fall of 1761. Two years later local Chippewa (Ojibwa), angered by British policies, captured the fort as part of Pontiac’s Uprising. The British regained control in 1764. Between 1779 and 1781, during the American Revolution, the British built Fort Mackinac on nearby Mackinac Island and abandoned Fort Michilimackinac.

Michilimackinac State Park
The British military abandoned and burned Fort Michilimackinac in 1781. Set aside as part of a village park in 1857, the fort site was placed under the direction of the Mackinac Island State Park Commission in 1909. In 1933 the fort's stockade was rebuilt after the park custodian unearthed the foundations of the pallisade. Always popular, 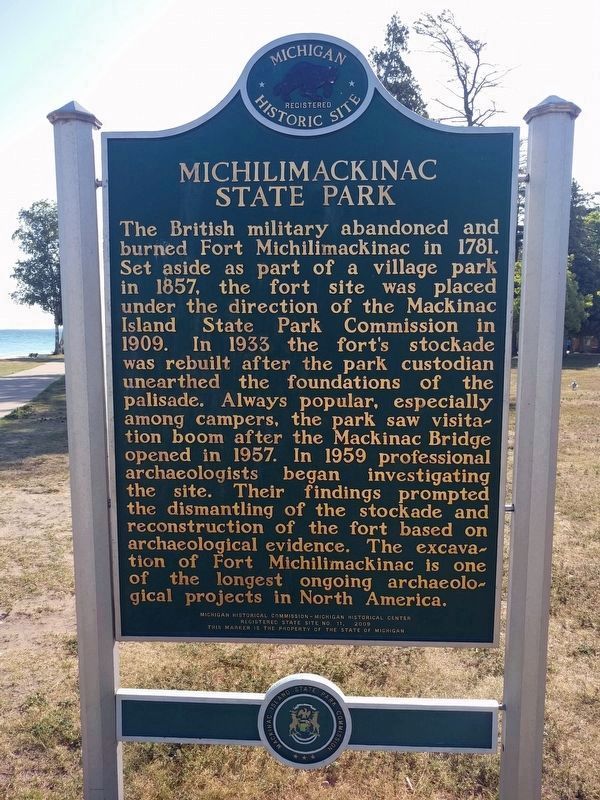 Click or scan to see
this page online
especially among campers, the park saw visitation boom after the Mackinac Bridge opened in 1957. In 1959 professional archaeologists began investigating the site. Their findings prompted the dismantling of the stockade and reconstruction of the fort based on archaeological evidence. The excavation of Fort Michilimackinac is one of the longest ongoing archaeological projects in North America.

Topics and series. This historical marker is listed in these topic lists: Anthropology & Archaeology • Colonial Era • Forts and Castles • Native Americans. In addition, it is included in the Michigan Historical Commission, and the National Historic Landmarks series lists. A significant historical year for this entry is 1715.

Location. 45° 47.263′ N, 84° 43.889′ W. Marker is in Mackinaw City, Michigan, in Cheboygan County. Marker can be reached from the intersection of North Nicolet Street and North Huron Avenue, on the right when traveling 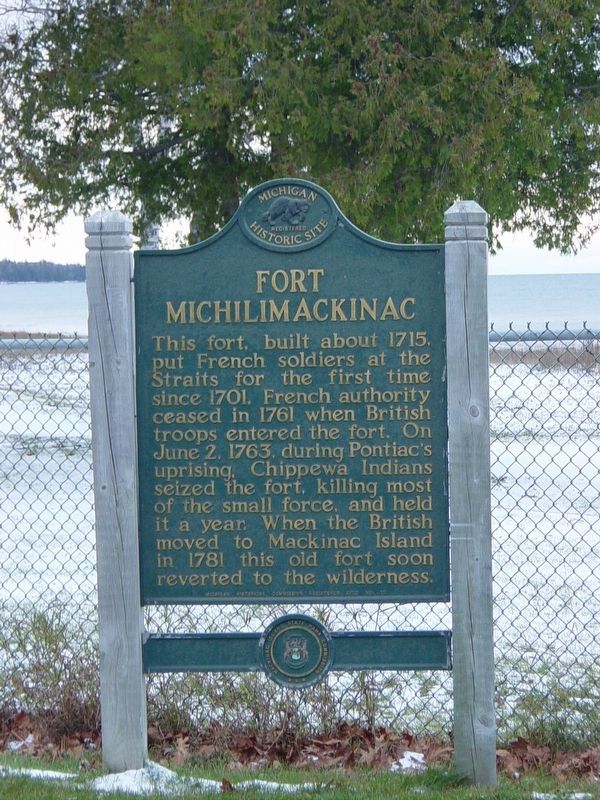 Also see . . .
1. Fort Michilimackinac Origin and Importance. Military History of the Upper Great Lakes entry:
When the fort was built, it stood 380 feet by 360 feet, and contained within its walls a parade ground, Commanding Officer’s house, Indian Council House, trader’s houses, guardhouse, and more. It was named after the Native American name for the area, Michilimackinac. The Fort was established as the end plan for a French expedition planning to return to the area after abandoning many Natives 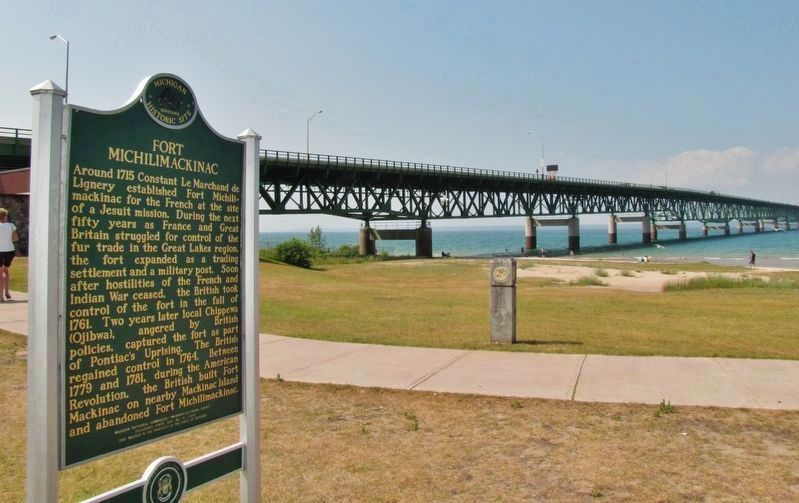 2. Fort Michilimackinac. Wikipedia entry:
The primary purpose of the fort was as part of the French-Canadian trading post system, which stretched from the Atlantic Coast and the St. Lawrence River to the Great Lakes, and south to the Mississippi River through the Illinois Country. The fort served as a supply depot for traders in the western Great Lakes. (Submitted on April 4, 2019, by Cosmos Mariner of Cape Canaveral, Florida.)

3. The Trade History of Fort Michilimackinac. Military History of the Upper Grawt Lakes entry:
Fort Michilimackinac played a pivotal role in the Northwestern fur trading industry from its founding in 1715, up to its abandonment in 1783 . (Submitted on April 4, 2019, by Cosmos Mariner of Cape Canaveral, Florida.)

4. Fort Michilimackinac: National Register of Historic Places Nomination #66000395. NPGallery Digital Asset Management System entry:
This fort at the tip of Michigan's lower peninsula was originally constructed by the French, but was later occupied by the British. During the American Revolution it was the only manned British fort on the Great Lakes, and was not abandoned by them until 1781. (Submitted on April 4, 2019, by Cosmos Mariner of Cape Canaveral, Florida.) 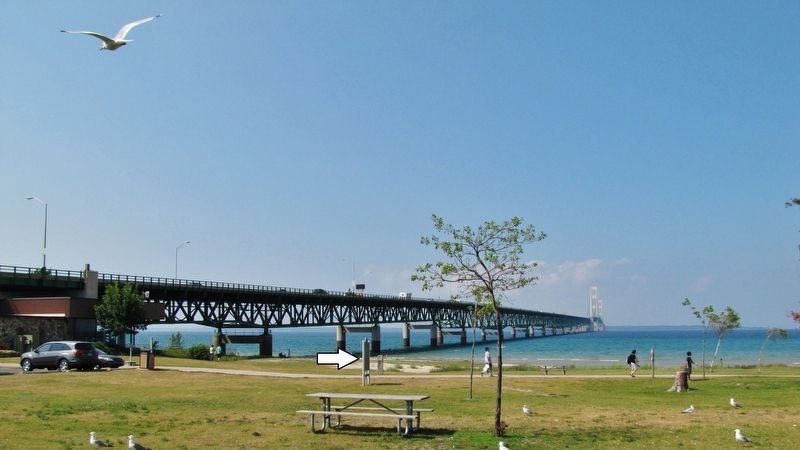 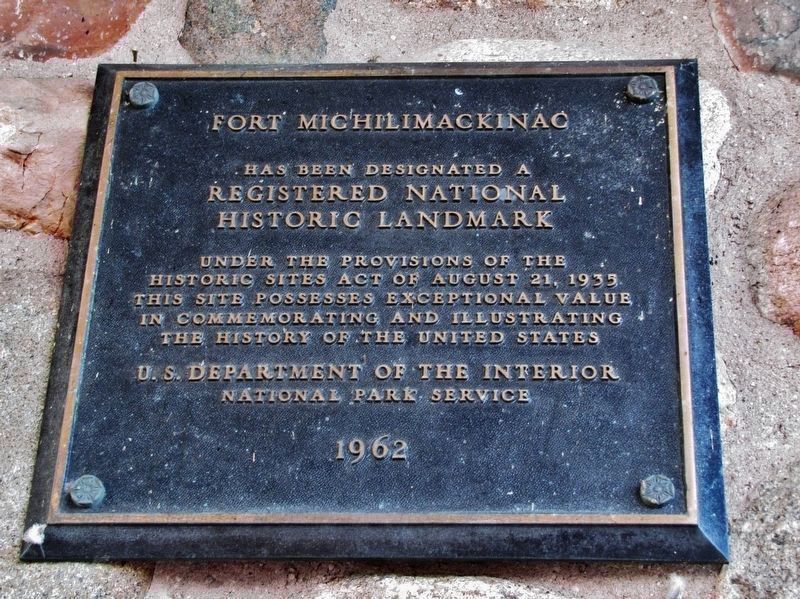 has been designated a
Registered National
Historic Landmark