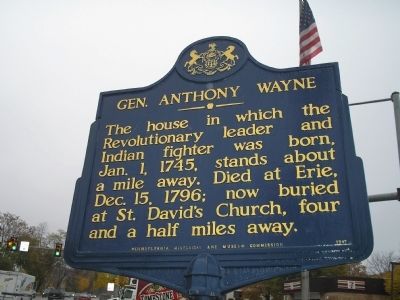 Photographed By Bill Coughlin, November 6, 2008
1. Gen. Anthony Wayne Marker
Inscription.
Gen. Anthony Wayne. . The house in which the Revolutionary leader and Indian fighter was born, Jan. 1, 1745, stands about a mile away. Died at Erie, Dec. 15, 1796; now buried at St. David’s Church, four and a half miles away. . This historical marker was erected in 1947 by Pennsylvania Historical and Museum Commission. It is in Tredyffrin Township in Chester County Pennsylvania

Topics and series. This historical marker is listed in these topic lists: Cemeteries & Burial Sites • Churches & Religion • War, US Revolutionary • Wars, US Indian. In addition, it is included in the Pennsylvania Historical and Museum Commission series list. A significant historical month for this entry is January 1871.

Other nearby markers. At least 8 other markers are within 3 miles of this marker, measured as the crow flies. Historic Waynesborough (approx. 0.7 miles 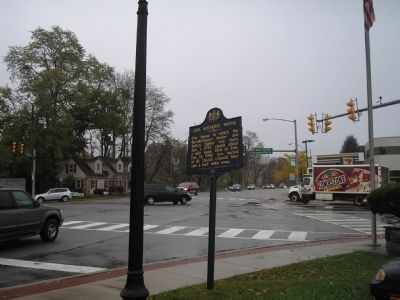 2. General Anthony Wayne - Behind the Marker. ExplorePAHistory.com (Submitted on July 14, 2011, by Mike Wintermantel of Pittsburgh, Pennsylvania.)

Additional commentary.
1. Marker to be removed.
The Pennsylvania Historical and Museum Commission, responsible for Pennsylvania's historical markers, began a Diversity, Equity, Inclusion and Access (DEIA) review of its markers. The Commission decided to remove and replace 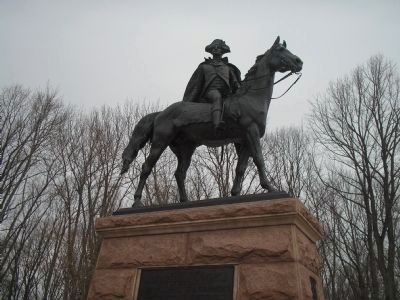 Editor’s want-list for this marker. Photo of Gen. Wayne's birth house. • Can you help?
Share this page.