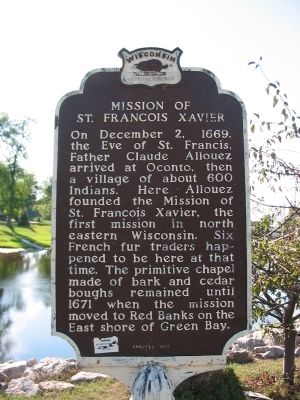 On December 2, 1669, the Eve of St. Francis, Father Claude Allouez arrived at Oconto, then a village of about 600 Indians. Here Allouez founded the Mission of St. Francois Xavier, the first mission in north eastern Wisconsin. Six French fur traders happened to be here at that time. The primitive chapel made of bark and cedar boughs remained until 1671 when the mission moved to Red Banks on the East shore of Green Bay.

Topics and series. This historical marker is listed in these topic lists: Churches & Religion • Colonial Era • Native Americans. In addition, it is included in the Wisconsin Historical Society series list. A significant historical month for this entry is December 1777.

Other nearby markers. At least 8 other markers are within one 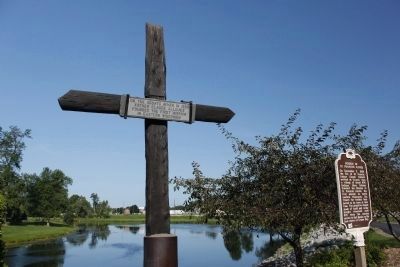 Also see . . .  Wikipedia Entry. “From 1667 through 1669 Allouez made a missionary tour of the western missions. He served as a missionary to the Potawatomi Indians in Wisconsin. The next year he was with the Mesquakie, establishing St. Mark’s Mission, and founding the mission of St. James among the Miami and Mascouten Indians, finally returning to Green Bay later that year. He said the first Mass in Oconto, Wisconsin. In 1671, in Sault Ste. Marie, Michigan, he was a principal speaker at the ceremony that formally declared the Great Lakes and the Mississippi River valley as territory of the King of France.” (Submitted on August 19, 2012.) 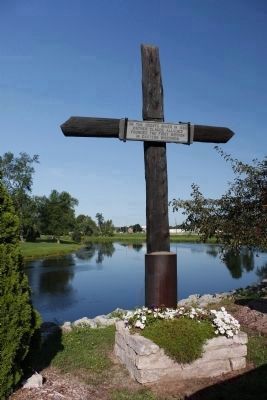