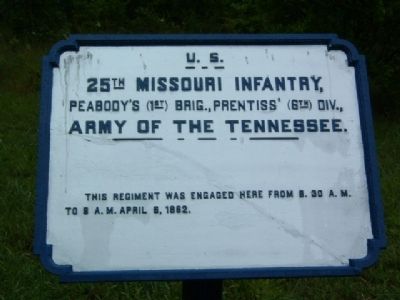 Topics. This historical marker is listed in this topic list: War, US Civil. A significant historical month for this entry is April 1961. 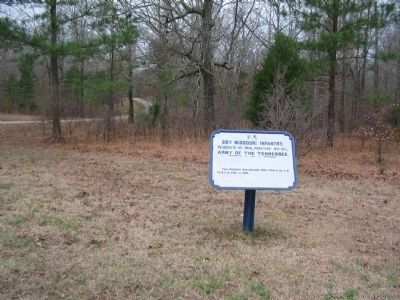 Click or scan to see
this page online
of this marker); Colonel Everett Peabody (about 300 feet away, measured in a direct line); 12th Michigan Infantry (about 600 feet away); Wood's Brigade (approx. 0.2 miles away); 21st Missouri Infantry (approx. ¼ mile away). Touch for a list and map of all markers in Shiloh. 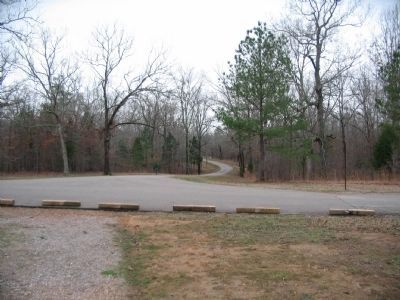 Photographed By Craig Swain, March 16, 2009
3. Early Federal Battle Line
Looking south down Reconnoitering Road near the intersection of Peabody Road. Federal regiments, rousted from their camps by early skirmishing, managed to form a quick battle line a few hundred yards south along the high ground in the distance. At around 8:30, the 25th Missouri fell back to a new line near the tablet location, also along a line of high ground.
Credits. This page was last revised on June 16, 2016. It was originally submitted on November 12, 2008, by Nick Kurtz of Littleton, Colorado. This page has been viewed 1,028 times since then and 18 times this year. Photos:   1. submitted on November 12, 2008, by Nick Kurtz of Littleton, Colorado.   2, 3. submitted on August 31, 2009, by Craig Swain of Leesburg, Virginia. • Craig Swain was the editor who published this page.
Share this page.