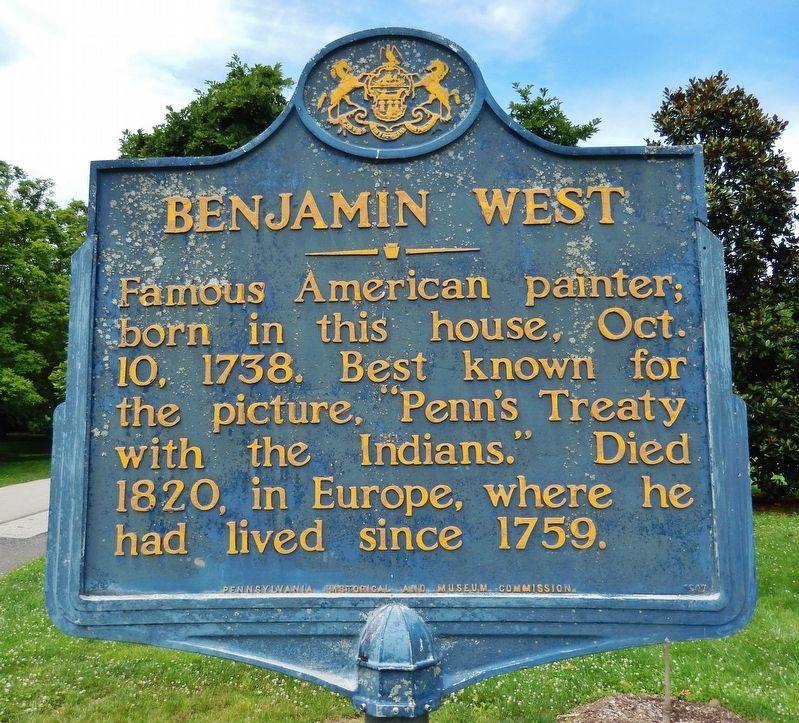 Photographed By Cosmos Mariner, June 25, 2019
1. Benjamin West Marker
Inscription.
Benjamin West. . Famous American painter; born in this house, Oct. 10, 1738. Best known for the picture, "Penn's Treaty with the Indians." Died 1820, in Europe, where he had lived since 1759. . This historical marker was erected in 1947 by Pennsylvania Historical and Museum Commission. It is in Swarthmore in Delaware County Pennsylvania

Topics and series. This historical marker is listed in these topic lists: Arts, Letters, Music • Colonial Era • Native Americans • Peace. In addition, it is included in the Pennsylvania Historical and Museum Commission series list. A significant historical date for this entry is October 10, 1738.

Location. 39° 54.29′ N, 75° 21.066′ W. Marker is in Swarthmore, Pennsylvania, in Delaware County. Marker is on Visitor's Center Road west of North Chester Road (Pennsylvania Route 320), on the right when traveling west. Marker is located at the southeast corner of the Benjamin West House grounds on the Swarthmore College campus, near the Swarthmore Admissions Visitor Parking lot. Touch for map. Marker is at or near this postal address: 500 College Avenue, Swarthmore PA 19081, United States of America. Touch for directions.

Other nearby markers. At least 8 other markers are within 2 miles of this marker, measured as the crow flies. An Original Landscape (within shouting distance of this marker); 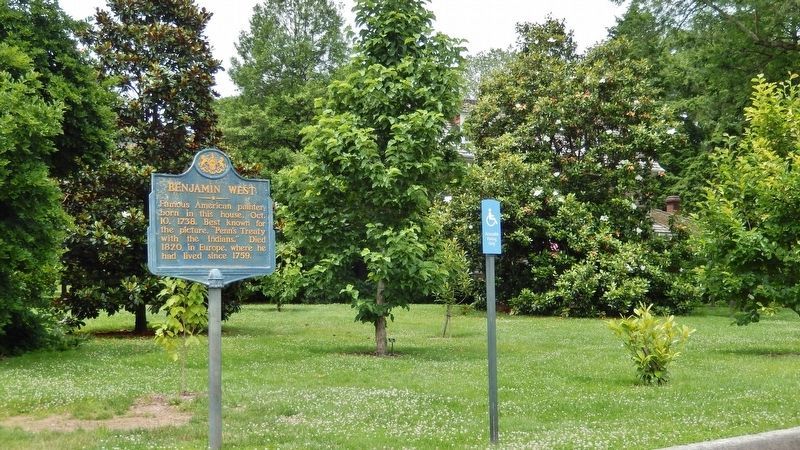 Also see . . .
1. Benjamin West. Known as the father of American painting and the Raphael of America, Benjamin West created an iconic style in his paintings of historical, landscape, and religious subjects. West was the first American artist who was able to gain international fame from his classical, high style, large-scale, historic paintings in oil on canvas. (Submitted on June 26, 2019, by Cosmos Mariner of Cape Canaveral, Florida.)

2. Benjamin West. From the humble circumstances of his birth as the youngest of ten children in Pennsylvania, Benjamin West became one of the most acclaimed artists of his day. Surrounded by little in the way of art in these Quaker surroundings, the precocious young artist moved to Philadelphia to paint portraits. His well-executed 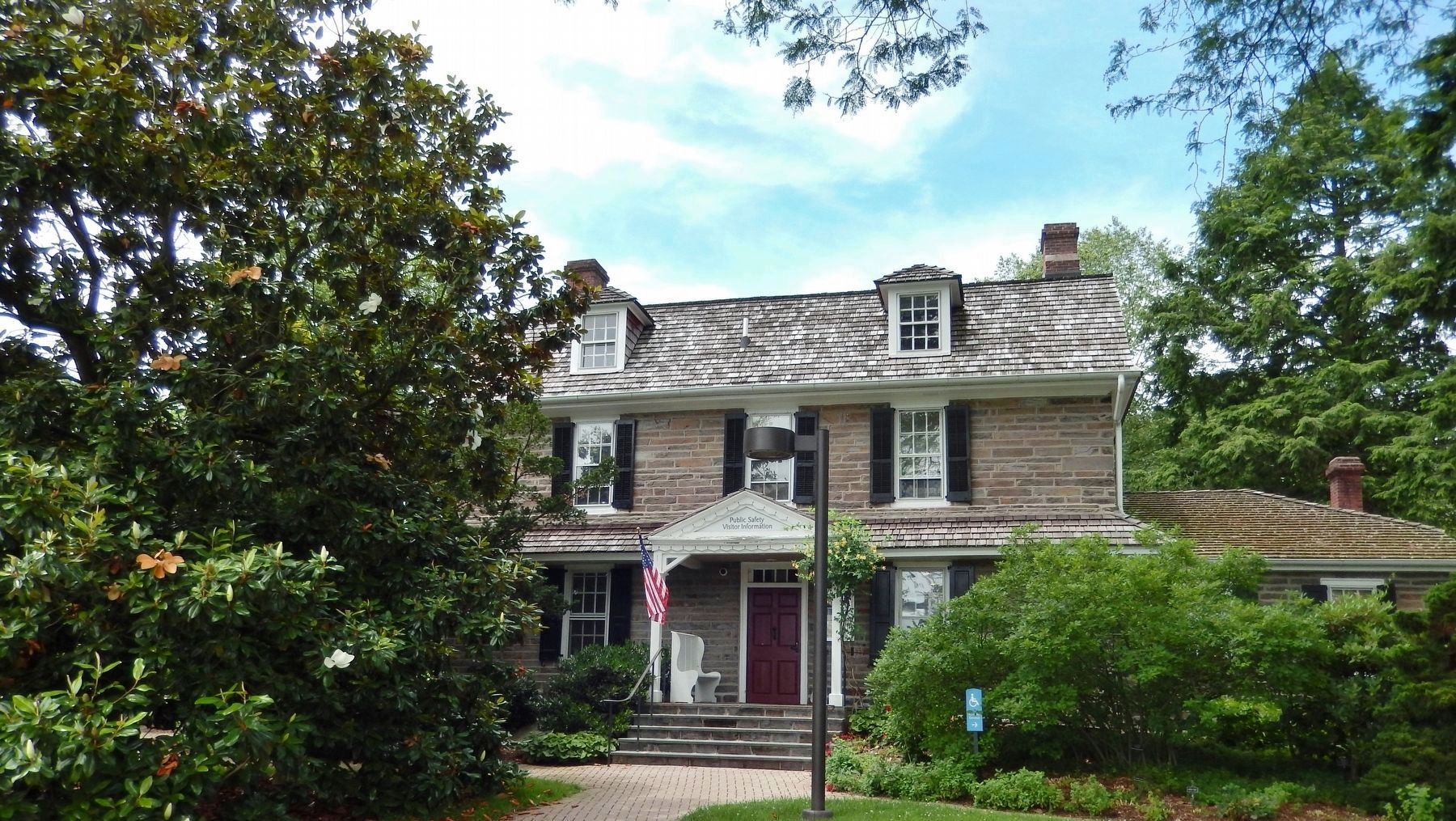 Photographed By Cosmos Mariner, June 25, 2019
3. Benjamin West House (about 50 yards northwest of marker)
• currently houses the Swarthmore College Public Safety and Visitor Information offices •
paintings of mythological and historical subjects are found in major collections; his portraits include Mary Hopkinson (c. 1764) and a final Self-Portrait (1819), both at the Smithsonian American Art Museum. (Submitted on June 26, 2019, by Cosmos Mariner of Cape Canaveral, Florida.) 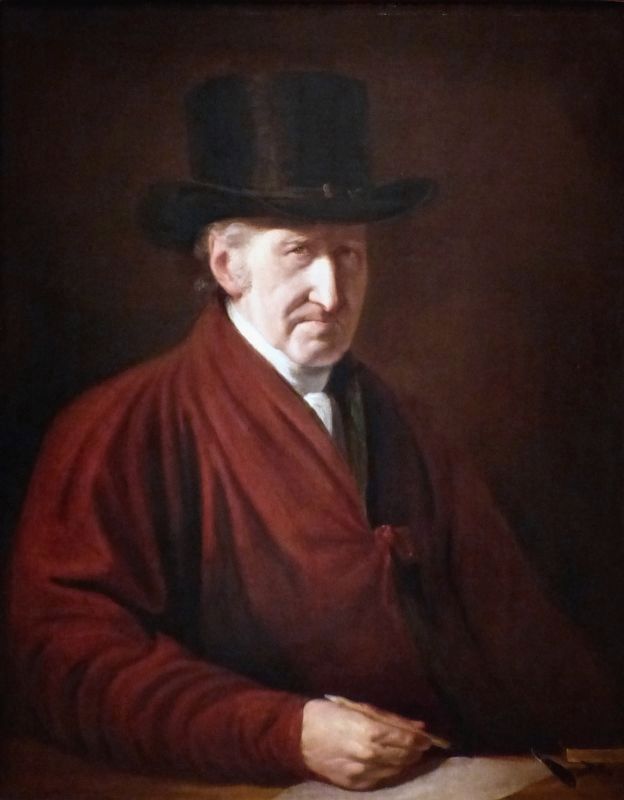 Six months before he died, West looked unflinchingly into the mirror to paint his self-portrait. He holds a drawing pencil and wears a painter's robe and beaver hat, which identify him as a founder and president of the Royal Academy of Art. The light is strongest on his face and hands, but the rest of the picture falls into shadow, as if he foresaw his own end. West was official painter to the King of England and the first American artist to gain an international reputation. His example led generations of American artists to measure their art and professional identities by European standards. -- Smithsonian American Art Museum.
Credits. This page was last revised on December 5, 2019. It was originally submitted on June 25, 2019, by Cosmos Mariner of Cape Canaveral, Florida. This page has been viewed 243 times since then and 21 times this year. Photos:   1, 2, 3. submitted on June 26, 2019, by Cosmos Mariner of Cape Canaveral, Florida.   4. submitted on June 26, 2019, by Allen C. Browne of Silver Spring, Maryland.
Share this page.