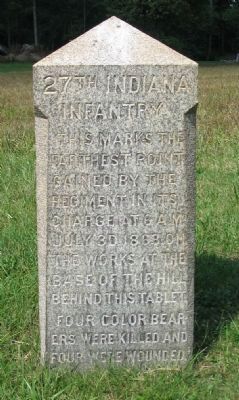 Photographed By Craig Swain, September 17, 2008
1. 27th Indiana Infantry Marker
Inscription.
27th Indiana Infantry. . This marks the farthest point gained by the Regiment in its charge at 6 a.m. July 3d. 1863 on the works at the base of the hill behind this tablet. Four color bearers were killed and four were wounded. . This historical marker was erected in 1890 by State of Indiana. It is in Cumberland Township in Adams County Pennsylvania

This marks the farthest point gained by the Regiment in its charge at 6 a.m. July 3d. 1863 on the works at the base of the hill behind this tablet. Four color bearers were killed and four were wounded.

Location. 39° 48.856′ N, 77° 12.961′ W. Marker is in Cumberland Township, Pennsylvania, in Adams County. Memorial is at the intersection of Colgrove Avenue and East Confederate Avenue, on the right when traveling west on Colgrove Avenue. Located in Spangler's Meadow at stop 13 (Spangler's Spring) on the driving tour of Gettysburg National Military Park. Touch for map. Marker is in this post office area: Gettysburg PA 17325, United States of America. Touch for directions. 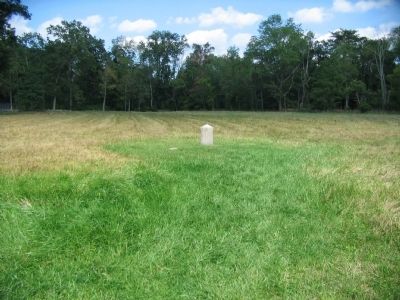 Photographed By Craig Swain, September 17, 2008
2. Location of the Position Marker in Spangler's Meadow

Photographed By Craig Swain, September 17, 2008
3. Advance of the 27th Indiana Infantry
Looking southeast from the marker location. The 27th advanced from the high ground south of Spangler's Spring in a attempt to drive Confederates out of earthworks on the lower crest of Culp's Hill. Colgrove Avenue pass on the right of this photo and the main 27th Infantry Regiment monument is seen on the other side of the creek in the tree line. 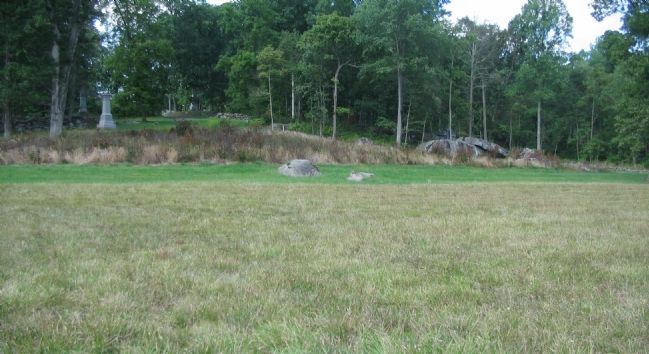 Photographed By Craig Swain, September 17, 2008
4. Target of the 27th Infantry Assault
Looking northwest from the marker location at the lower crest of Culp's Hill. Elements of Steuart's Confederate Brigade occupied earthworks along the high ground. The earthworks had been built by Federal forces earlier starting in the evening of July 1. When those Federal forces (some of which included Colgrove's Brigade and the 27th Indiana) were sent to the Federal left in the afternoon of July 2, Steuart's Brigade found these positions unoccupied. The Federals would fight to retake them. 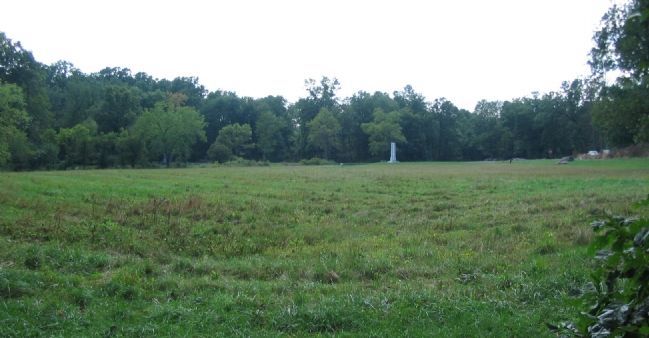 Photographed By Craig Swain, September 17, 2008
5. Confederate Flanking Fire on the 27th Indiana
Looking from the stone wall north of the marker, which was occupied by Smith's Confederate Brigade. The position marker is seen in the middle of the field, just to the left of the Indiana State Memorial. Smith's Brigade fired onto the flanks of the Indiana troops as they advanced.
Credits. This page was last revised on December 3, 2020. It was originally submitted on November 15, 2008, by Craig Swain of Leesburg, Virginia. This page has been viewed 1,261 times since then and 19 times this year. Photos:   1, 2, 3, 4, 5. submitted on November 15, 2008, by Craig Swain of Leesburg, Virginia.
Share this page.