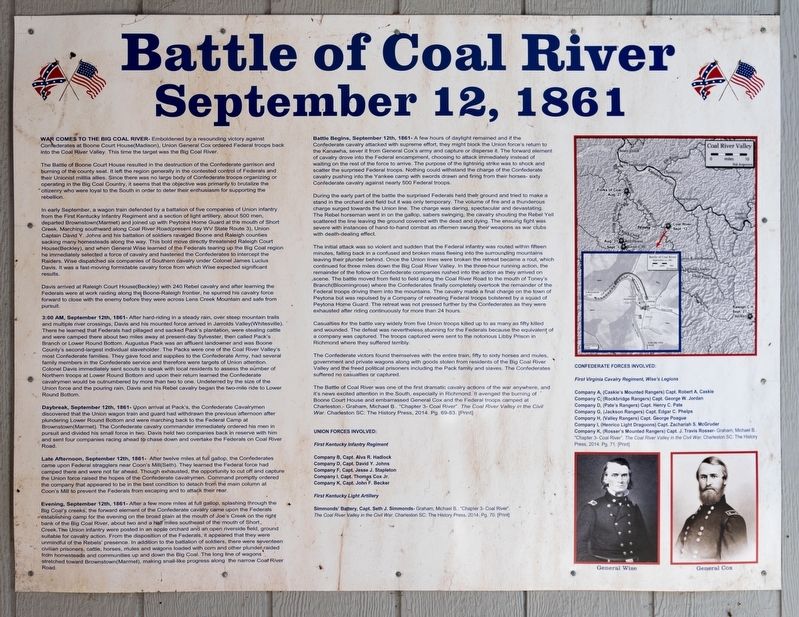 The Battle of Boone Court House resulted in the destruction of the Confederate garrison and burning of the county seat. It left the region generally in the contested control of Federals and their Unionist militia allies. Since there was no large body of Confederate troops organizing or operating in the Big Coal Country, it seems that the objective was primarily to brutalize the citizenry who were loyal to the South in order to deter their enthusiasm for supporting the rebellion.

In early September, a wagon train defended by a battalion of five companies of Union infantry from the First Kentucky Infantry Regiment and a section of light artillery, about 500 men, k departed Brownstown (Marmet) and joined up with Peytona Home Guard at the mouth of Short Creek. Marching southward along Coal River Road (present day State Route 3), Union Captain David Y. Johns and his battalion of soldiers ravaged Boone and Raleigh counties sacking many homesteads along the way. This bold move directly threatened Raleigh Court House (Beckley), and when General Wise learned of the Federals tearing up the Big Coal region he immediately selected a force of cavalry and hastened the Confederates to intercept the Raiders. Wise dispatched six companies of Southern cavalry under Colonel James Lucius Davis. It was a fast-moving formidable cavalry force from which Wise expected significant results.

Davis arrived at Raleigh Court House (Beckley) with 240 Rebel cavalry and after learning the Federals were at work raiding along the Boone-Raleigh frontier, he spurred his cavalry force forward to close with the enemy before they were across Lens Creek Mountain and safe from pursuit.

3:00 AM, September 12th, 1861. After hard-riding in a steady rain, over steep mountain trails and multiple river crossings, Davis and his mounted force arrived in Jarrolds Valley (Whitesville). 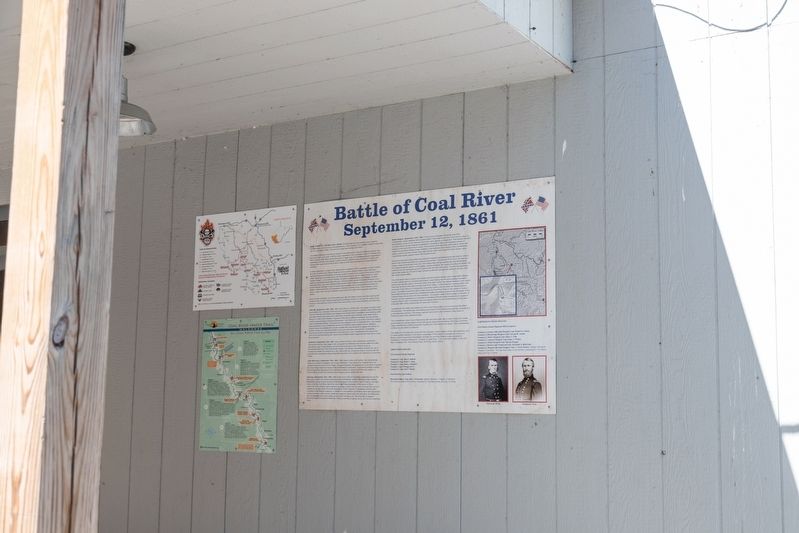 Click or scan to see
this page online
There he learned that Federals had pillaged and sacked Pack’s plantation, were stealing cattle and were camped there about two miles away at present-day Sylvester, then called Pack’s Branch or Lower Round Bottom. Augustus Pack was an affluent landowner and was Boone County’s second-largest individual slaveholder. The Packs were one of the Coal River Valley’s most Confederate families. They gave food and supplies to the Confederate Army, had several family members in the Confederate service and therefore were targets of Union attention. Colonel Davis immediately sent scouts to speak with local residents to assess the number of Northern troops at Lower Round Bottom and upon their return learned the Confederate cavalrymen would be outnumbered by more than two to one. Undeterred by the size of the Union force and the pouring rain, Davis and his Rebel cavalry began the two-mile ride to Lower Round Bottom.

Daybreak, September 12th, 1861. Upon arrival at Pack’s, the Confederate Cavalrymen discovered that the Union wagon train and guard had withdrawn the previous afternoon after plundering Lower Round Bottom and were marching back to the Federal Camp at Brownstown (Marmet). The Confederate cavalry commander immediately ordered his men in pursuit and divided his small force in two. Davis held two companies back in reserve with him and sent four companies racing ahead to chase down and overtake the Federals on Coal River Road.

Late Afternoon, September 12th, 1861. After twelve miles at full gallop, the Confederates came upon Federal stragglers near Coon’s Mill (Seth). They learned the Federal force had camped there and were not far ahead. Though exhausted, the opportunity to cut off and capture the Union force raised the hopes of the Confederate cavalrymen. Command promptly ordered the company that appeared to be in the best condition to detach from the main column at Coon’s Mill to prevent the Federals from escaping and to attack their rear.

Evening, September 12th, 1861. After a few more miles at full gallop, splashing through the Big Coal’s creeks, the forward element of the Confederate cavalry came upon the Federals establishing camp for the evening on the broad plain at the mouth of Joe’s Creek on the right bank of the Big Coal River, about two and a half miles southeast of the mouth of Short Creek. The Union 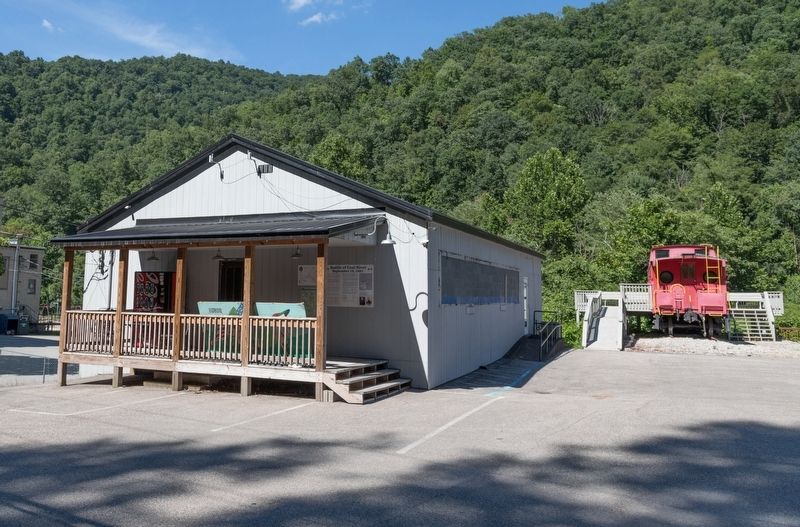 Photographed By J. J. Prats, July 13, 2019
3. Battle of Coal River Marker
Poster-sized panel can be seen on the wall at the top of the steps.
infantry were posted in an apple orchard and an open riverside field, ground suitable for cavalry action. From the disposition of the Federals, it appeared that they were unmindful of the Rebels’ presence. In addition to the battalion of soldiers, there were seventeen civilian prisoners, cattle, horses, mules and wagons loaded with corn and other plunder raided from homesteads and communities up and down the Big Coal. The long line of wagons stretched toward Brownstown (Marmet), making snail-like progress along the narrow Coat River Road.

Battle Begins, September 12th, 1861. A few hours of daylight remained and if the Confederate cavalry attacked with supreme effort, they might block the Union force’s return to the Kanawha, sever it from General Cox's army, and capture or disperse it. The forward element of cavalry drove into the Federal encampment, choosing to attack immediately instead of waiting on the rest of the force to arrive. The purpose of the lightning strike was to shock and scatter the surprised Federal troops. Nothing could withstand the charge of the Confederate cavalry pushing into the Yankee camp with swords drawn and firing from their horses—sixty Confederate cavalry against nearly 500 Federal troops.

During the early part of the battle the surprised Federals held their ground and tried to make a stand in the orchard and field but it was only temporary. The volume of fire and a thunderous charge surged towards the Union line. The charge was daring, spectacular and devastating. The Rebel horseman went in on the gallop, sabers swinging, the cavalry shouting the Rebel Yell scattered the line leaving the ground covered with the dead and dying. The ensuing fight was severe with instances of hand-to-hand combat as riflemen swung their weapons as war clubs with death-dealing effect.

The initial attack was so violent and sudden that the Federal infantry was routed within fifteen minutes, falling back in a confused and broken mass fleeing into the surrounding mountains leaving their plunder behind. Once the Union lines were broken the retreat became a rout, which continued for three miles down the Big Coal River Valley. In the three-hour running action, the remainder of the follow on Confederate companies rushed into the action as they arrived on scene. The battle moved from field to field along the Coal 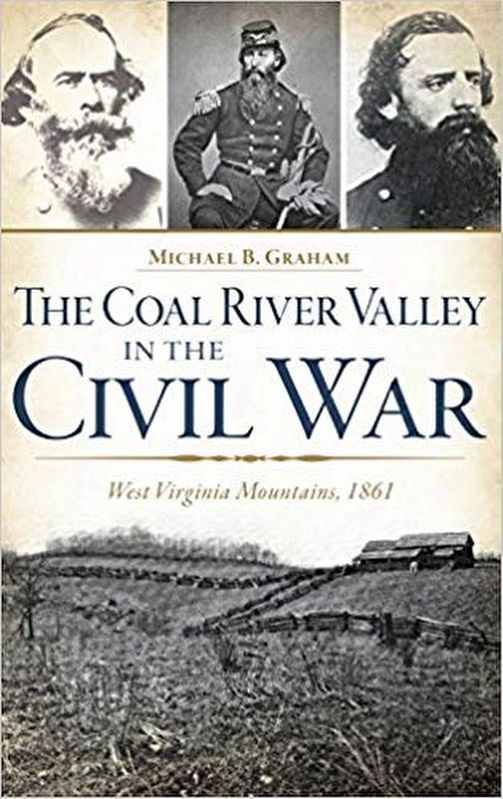 4. The Coal River Valley in the Civil War
by Michael B. Graham.
Click for more information.
River Road to the mouth of Toney’s Branch (Bloomingrose) where the Confederates finally completely overtook the remainder of the Federal troops driving them into the mountains. The cavalry made a final charge on the town of Peytona but was repulsed by a Company of retreating Federal troops bolstered by a squad of Peytona Home Guard. The retreat was not pressed further by the Confederates as they were exhausted after riding continuously for more than 24 hours.

Casualties for the battle vary widely from five Union troops killed up to as many as fifty killed and wounded. The defeat was nevertheless stunning for the Federals because the equivalent of a company was captured. The troops captured were sent to the notorious Libby Prison in Richmond where they suffered terribly.

The Confederate victors found themselves with the entire train, fifty to sixty horses and mules, government and private wagons along with goods stolen from residents of the Big Coal River Valley and the freed political prisoners including the Pack family and slaves. The Confederates suffered no casualties or captured.

The Battle of Coal River was one of the first dramatic cavalry actions of the war anywhere, and its news excited attention in the South, especially in Richmond. It avenged the burning of Boone Court House and embarrassed General Cox and the Federal troops camped at Charleston.

Topics. This historical marker is listed in these topic lists: War, US Civil • Waterways & Vessels. A significant historical date for this entry is September 12, 1861.

More about this marker. This thin metal interpretative panel shows a map of the battle in its upper right and portraits of Generals Wise and cox on its lower right. The panel cites Michael B Graham’s 2014 book The Coal River Valley in the Civil War, chapter 3.