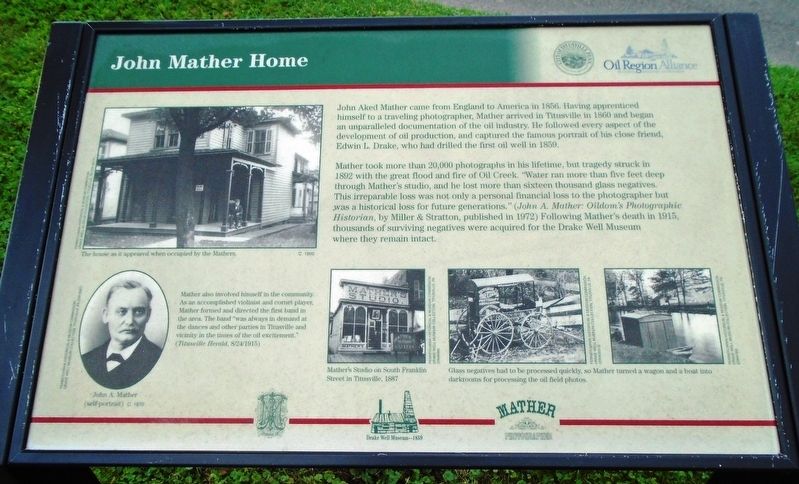 John Aked Mather came from England to America in 1856. Having apprenticed himself to a traveling photographer, Mather arrived in Titusville in 1860 and began an unparalleled documentation of the oil industry. He followed every aspect of the development of oil production, and captured the famous portrait of his close friend, Edwin L. Drake, who had drilled the first oil well in 1859.

Mather took more than 20,000 photographs in his lifetime, but tragedy struck in 1892 with the great flood and fire of Oil Creek. "Water ran more than five feet deep through Mather's studio, and he lost more than sixteen thousand glass negatives. This irreparable loss was not only a personal financial loss to the photographer but was a historical loss for future generations." (John A. Mather: Oildom's Photographic Historian, by Miller and Stratton, published in 1972) Following Mather's death in 1915, thousands of surviving negatives were acquired for the Drake Well Museum where they remain intact.

Mather also involved himself in the community. As an accomplished violinist and cornet player, Mather formed and directed the first band in the area. The band "was always in demand at the dances and other parties in Titusville and vicinity in the times of the oil excitement." , (Titusville Herald, 8/24.1915)

[Photo captions, counterclockwise from top left, read] , . The house as it appeared when occupied by the Mathers C. 1900

. Glass negatives had to be processed quickly, so Mather turned a wagon and a boat into darkrooms for processing the oil field photos. . This historical marker was erected by Oil Region Alliance and City of Titusville. It is in Titusville in Crawford County Pennsylvania