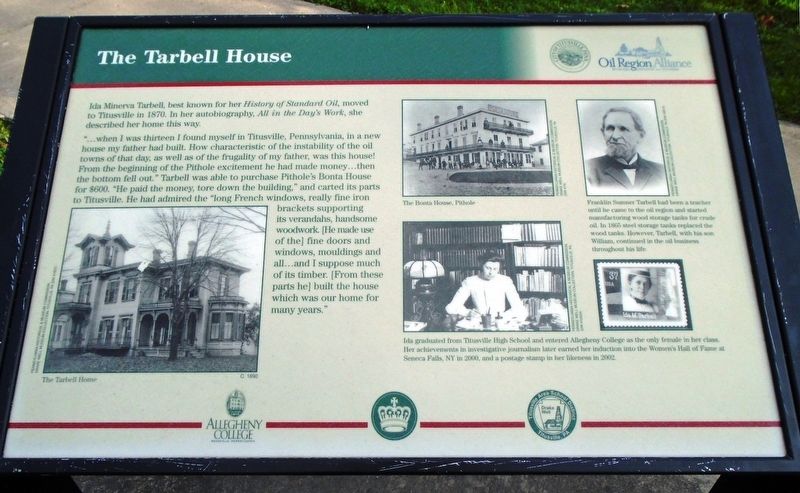 Ida Minerva Tarbell, best known for her History of Standard Oil, moved to Titusville in 1870. In her autobiography, All in the Day's Work, she described her home this way.

"...when I was thirteen I found myself in Titusville, Pennsylvania, in a new house my father had built. How characteristic of the instability of the oil towns of that day, as well as of the frugality of my father, was this house! From the beginning of the Pithole excitement he had made money...then the bottom fell out." Tarbell was able to purchase Pithole's Bonta House for $600. "He paid the money, tore down the building," and carted its parts to Titusville. He had admired the "long French windows, really fine iron brackets supporting its verandahs, handsome woodwork. [He made use of the] fine doors and windows, mouldings and all...and I suppose much of its timber. [From these parts he] built the house which was our home for many years."

. Franklin Sumner Tarbell had been a teacher until he came to the oil region and started manufacturing wood storage tanks for crude oil. In 1865 steel storage tanks replaced the wood tanks. However, Tarbell, with his son William, continued in the oil business throughout his life.

. Ida graduated from Titusville High School and entered Allegheny College as the only female in her class. Her achievements in investigative journalism later earned her induction into the Women's Hall of Fame at Seneca Falls, NY in 2000, and a postage stamp in her likeness in 2002.

. The Tarbell Home C. 1890 . This historical marker was erected by Oil Region Alliance and City of Titusville. It is in Titusville in Crawford County Pennsylvania