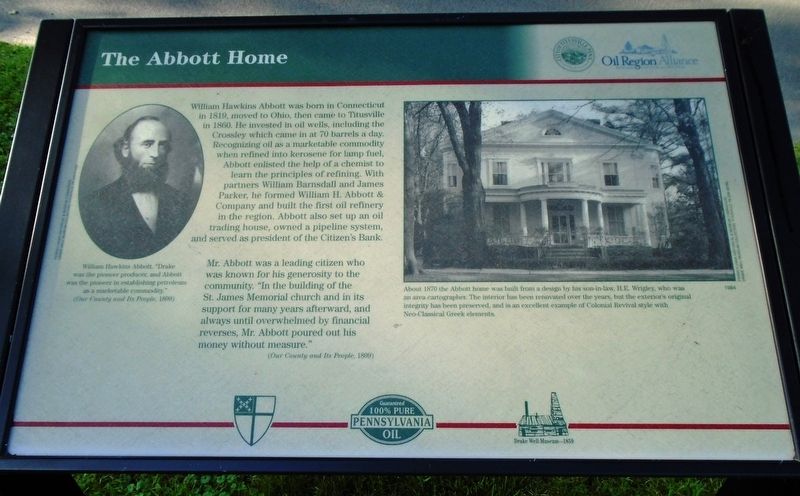 William Hawkins Abbott was born in Connecticut in 1819, moved to Ohio, then came to Titusville in 1860. He invested in oil wells, including the Crossley which came in at 70 barrels a day. Recognizing oil as a marketable commodity when refined into kerosene for lamp fuel, Abbott enlisted the help of a chemist to learn to principles of refining. With partners William Barnsdall and James Parker, he formed William H. Abbott and Company and built the first oil refinery in the region. Abbott also set up an oil trading house, owned a pipeline system, and served as president of the Citizen's Bank.

Mr. Abbott was a leading citizen who was known for his generosity to the community. "In the building of the St. James Memorial church and in its support for many years afterward, and always until overwhelmed by financial reverses, Mr. Abbott poured out his money without measure." , (Our County and Its People, 1899)

[Photo captions, from left to right, read] , . William Hawkins Abbott. "Drake was the pioneer producer, and Abbott was the pioneer in establishing petroleum as a marketable commodity." (Our County and Its People, 1899)

. About 1870 the Abbott home was built from a design by his son-in-law, H.E. Wrigley, who was an area cartographer. The interior has been renovated over the years, but the exterior's original integrity has been preserved, and is an excellent example of Colonial Revival style with Neo-Classical Greek elements. [Photo] 1984 . This historical marker was erected by Oil Region Alliance and City of Titusville. It is in Titusville in Crawford County Pennsylvania