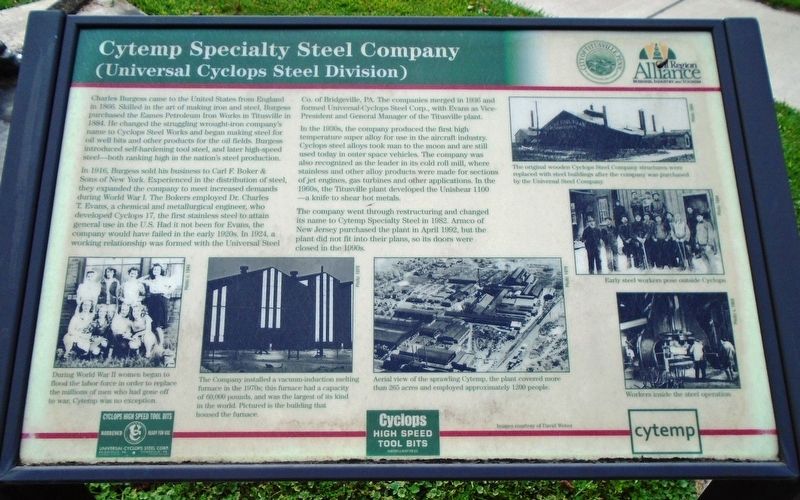 Charles Burgess came to the United States from England in 1866. Skilled in the art of making iron and steel, Burgess purchased the Eames Petroleum Iron Works in Titusville in 1884. He changed the struggling wrought-iron company's name to Cyclops Steel Works and began making steel for oil well bits and other products for the oil fields. Burgess introduced self-hardening tool steel, and later high-speed steel, both ranking high in the nation's steel production.

In 1916, Burgess sold his business to Carl F. Boker and Sons of New York. Experienced in the distribution of steel, they expanded the company to meet increased demands during World War I. The Bokers employed Dr. Charles T. Evans, a chemical and metallurgical engineer, who developed Cyclops 17, the first stainless steel to attain general use in the U.S. Had it not been for Evans, the company would have failed in the early 1920s. In 1924, a working relationship was formed with the Universal Steel Co. of Bridgeville, PA. The companies merged in 1936 and formed Universal-Cyclops Steel Corp., with Evans as Vice President and General Manager of the Titusville plant.

In the 1930s, the company produced the first high temperature super alloy for use in the aircraft industry. Cyclops steel alloys took man to the moon and are still used today in outer space vehicles. The company was also recognized as the leader in its cold roll mill, where stainless and other alloy products were made for sections of jet engines, gas turbines and other applications. In the 1960s, the Titusville plant developed the Unishear 1100, a knife to shear hot metals.

The company went through restructuring and changed its name to Cytemp Specialty Steel in 1982. Armco of New Jersey purchased the plant in April 1992, but the plant did not fit into their plans, so its doors were closed in the 1990s.

Photo captions, clockwise from top right, read] , . The original wooden Cyclops Steel Company structures were replaced with steel buildings after the company was purchased by the Universal Steel Company. 1884

. Workers inside the steel operation 1950

. Aerial view of the sprawling Cytemp, the plant covered more than 265 acres and employed approximately 1200 people. 1979

. The Company installed a vacuum-induction melting furnace in the 1970s; this furnace had a capacity of 60,000 pounds, and was the largest of its kind in the world. Pictured is the building that housed the furnace. 1979

. During World War II women began to flood the labor force in order to replace the millions of men who had gone off to war, Cytemp was not exception. c.1940. . This historical marker was erected in 2014 by Oil Region Alliance, City of Titusville, and Cytemp/Universal Cyclops Quarter Century Club. It is in Titusville in Crawford County Pennsylvania