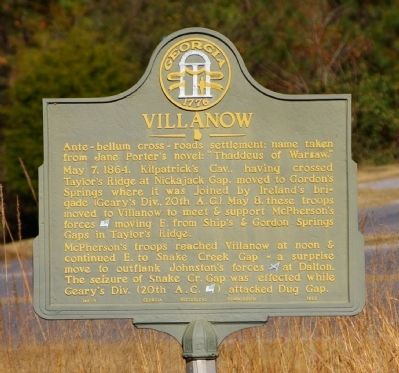 Photographed By David Seibert, November 18, 2008
1. Villanow Marker
Inscription.
Villanow. . Ante-bellum cross-roads settlement; name taken from Jane Porter's novel: 'Thaddeus of Warsaw.' May 7, 1864, Kilpatrick's Cav., having crossed Taylor's Ridge at Nickajack Gap, moved to Gordon's Springs where it was joined by Ireland's brigade (Geary's Div., 20th A.C.). May 8, these troops moved to Villanow to meet and support McPherson's forces (US) moving E. from Ship's and Gordon Springs Gaps in Taylor's Ridge., McPherson's troops reached Villanow at noon and continued E. to Snake Creek Gap - a surprise move to outflank Johnston's forces at Dalton. The seizure of Snake Cr. Gap was effected while Geary's Div. (20th A.C.) (US) attacked Dug Gap. . This historical marker was erected in 1953 by Georgia Historical Commission. It is Near LaFayette in Walker County Georgia

Topics and series. This historical marker is listed in this topic list: War, US Civil. In addition, it is included in the Georgia Historical Society series list. A significant historical date for this entry is May 7, 1864. 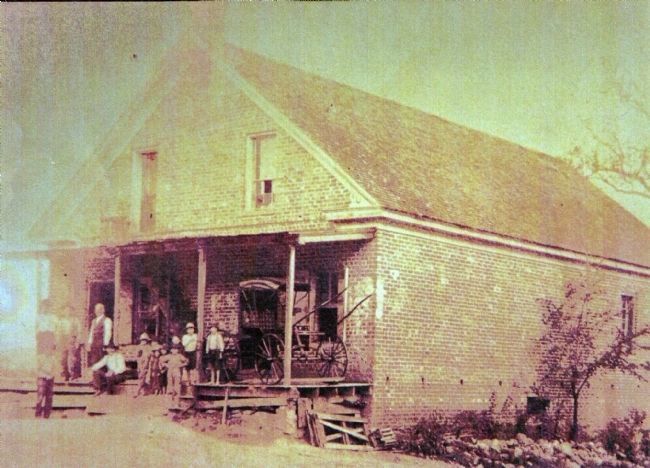 circa 1880
2. Villanow General Store
The Villanow General Store is listed in the National Register of Historical Places (under the name: Cavender's Store). It holds the record as being the oldest free standing country store in the State of Georgia. Included in the documentation of the National Register of Historical Places is information the store was built by owner and operator Joseph Warren Cavender of Villanow. He was a veteran of the War Between the States on the Confederate side. The store is still located at the main intersection of Villanow, Walker County, Georgia.
Joseph Warren Cavender is pictured on the front porch of his store wearing a vest and tie as he posed with fellow town folk.

Click or scan to see
this page online
Route 136 and Georgia Route 201, on the left when traveling east on State Route 136. Touch for map. Marker is at or near this postal address: 11825 East Highway 136, La Fayette GA 30728, United States of America. Touch for directions.

It is my belief, after interviewing many local folks familiar with the history of Villanow and the Cavender Country Store, that there must have been another previous store near the location of today's Villanow Country Store (now closed), which would be the one visited by the Union Troops, instead. 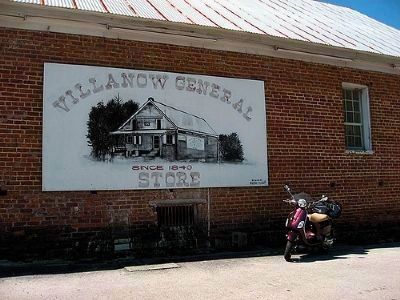 Photographed By Eddie Hightower, circa 2004
3. Modern Day Cavender General Store of Villanow
Modern day owners and operators of the Cavender General Store of Villanow, Walker County, Georgia, have been the Edwards, and the Vess families.
This photo shows an artistic rendition of the store painted on the northern side of the store.
When Joseph Warren Cavender operated his store, he also had buggy & wagon shop, a blacksmith shop, and a cotton mill on his property.
Cavender offered Villanow citizens most all of their needs, including caskets at his business location.
been a number of years after Joseph Warren Cavender's service in the Civil War, when he returned to Villanow and used the earnings from helping restore the area of the Battle of Chickamauga as an employee of the United States Government that he began to build his two-story brick Villanow Country Store. Note To Editor only visible by Contributor and editor
— Submitted December 7, 2012, by Eddie Hightower of Branchville, South Carolina. 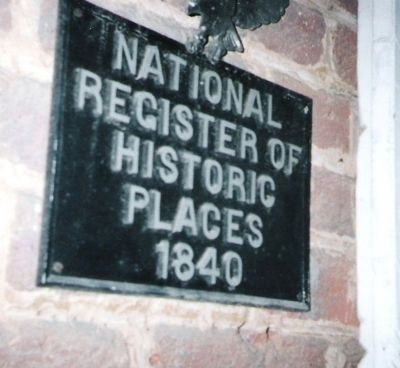 Photographed By Eddie Hightower, circa 2004
4. National Listing of Historic Places Marker of Cavender General Store
Near the front entrance of the Cavender General Store of Villanow, Walker County, Georgia, can be seen the metallic commemorative marker, which proclaims the historic nature of this two story brick building which for a short time during the War Between the States, was a stop-over for the Union Cavalry Soldiers, who rode their mounts through the aisles of this historic country store.
Note the date on this commemorative marker is now in question. Mr. Cavender is cited as the builder but, according to his gravestone and the article linked above, he wasn't born until 1845.
Credits. This page was last revised on June 16, 2016. It was originally submitted on November 27, 2008, by David Seibert of Sandy Springs, Georgia. This page has been viewed 3,382 times since then and 134 times this year. Photos:   1. submitted on November 27, 2008, by David Seibert of Sandy Springs, Georgia.   2, 3, 4. submitted on December 1, 2008, by Eddie Hightower of Branchville, South Carolina. • Craig Swain was the editor who published this page.
Share this page.