The Deportation of the Inhabitants of Île Saint-Jean 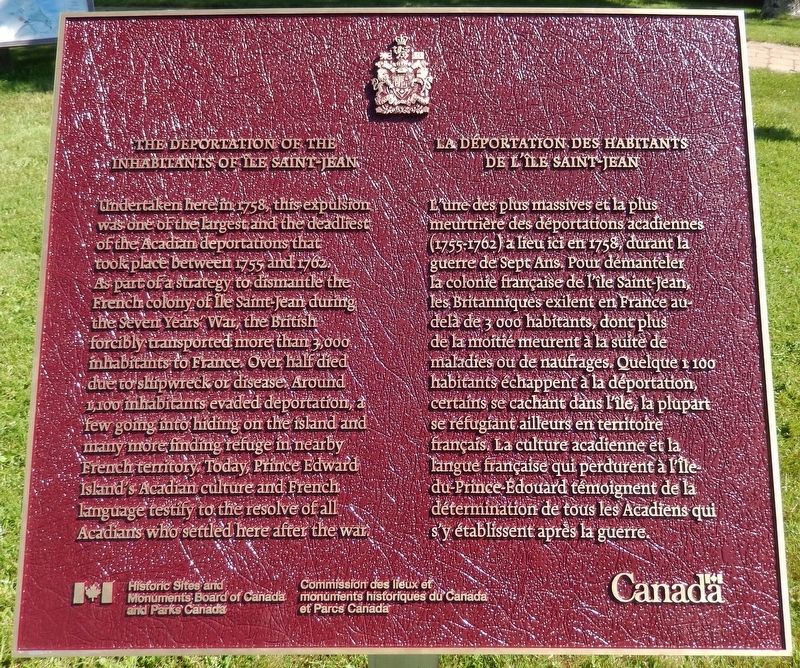 Photographed By Cosmos Mariner, July 18, 2019
1. The Deportation of the Inhabitants of Ile Saint-Jean Marker
Inscription.
English: , Undertaken here in 1758, this expulsion was one of the largest and the deadliest of the Acadian deportations that took place between 1755 and 1762. As part of a strategy to dismantle the French colony of Île Saint-Jean during the Seven Years' War, the British forcibly transported more than 3,000 inhabitants to France. Over half died due to shipwreck or disease. Around 1,100 inhabitants evaded deportation, a few going into hiding on the island and many more finding refuge in nearby French territory. Today, Prince Edward Island's Acadian culture and French language testify to the resolve of all Acadians who settled here after the war. , . This historical marker was erected by Historic Sites and Monuments Board of Canada and Parks Canada/Commission des lieux et monuments historiques du Canada et Parcs Canada. It is in Rocky Point in Queens County Prince Edward Island