The Book of Lismore 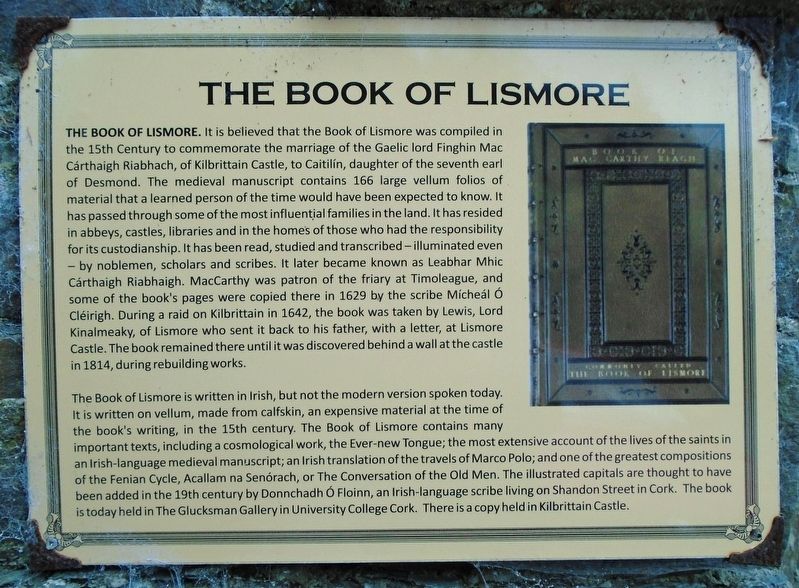 Photographed By William Fischer, Jr., May 18, 2019
1. The Book of Lismore Marker
Inscription.

THE BOOK OF LISMORE. It is believed that the Book of Lismore was compiled in the 15th Century to commemorate the marriage of the Gaelic lord Finghin Mac Cárthaigh Riabhach, of Kilbrittain Castle, to Caitilín, daughter of the seventh earl of Desmond. The medieval manuscript contains 166 large vellum folios of material that a learned person of the time would have been expected to know. It has passed through some of the most influential families in the land. It has resided in abbeys, castles, libraries and in the homes of those who had the responsibility for its custodianship. It has been read, studied and transcribed , illuminated even , by noblemen, scholars and scribes. It later became known as Leabhar Mhic Cárthaigh Riabhaigh. MacCarthy was patron of the friary at Timoleague, and some of the book's pages were copied there in 1629 by the scribe Mícheál Ó Cléirigh. During a raid on Kilbrittain in 1642, the book was taken by Lewis, Lord Kinalmeaky, of Lismore who sent it back to his father, with a letter, at Lismore Castle. The book remained there until it was discovered behind a wall at the castle in 1814, during rebuilding works.

The Book of Lismore is written in Irish, but not the modern version spoken today. It is written on vellum, made from calfskin, an expensive material at the time of the book's writing, in the 15th century. The Book of Lismore contains many important texts, including a cosmological work, the Ever-new Tongue; the most extensive account of the lives of the saints in an Irish-language medieval manuscript; an Irish translation of the travels of Marco Polo; and one of the greatest compositions of the Fenian Cycle, Acallam na Senórach, or The Conversation of the Old Men. The illustrated capitals are thought to have been added in the 19th century by Donnchadh Ó Floinn, an Irish-language scribe living on Shandon Street in Cork. The book is today held in The Glucksman Gallery in University College Cork. There is a copy held in Kilbrittain Castle. . This historical marker is in Kilbrittain in County Cork Munster Ireland