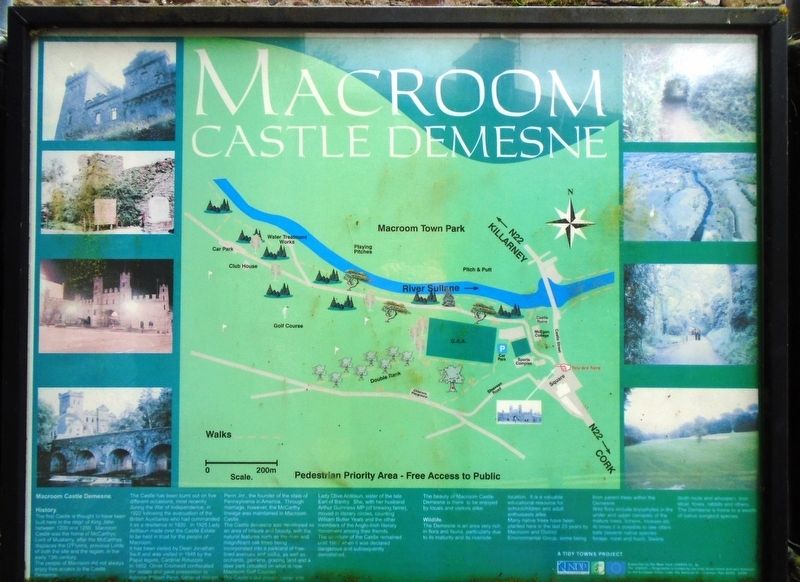 History. , The first Castle is thought to have been built here in the reign of King John between 1200 and 1250. Macroom Castle was the home of McCarthys, Lord of Muskerry, after the McCarthys displace[d] the O'Flynns, previous Lords of both the site and the region, in the early 13th century.

The people of Macroom did not always enjoy free access to the Castle Demesne.

The Castle has been burnt out on five different occasions, most recently during the War of Independence, in 1922 following the evacuation of the British Auxiliaries who had commanded it as a residence in 1920. In 1925 Lady Ardilaun made over the Castle Estate to be held in trust for the people of Macroom.

It has been visited by Dean Jonathan Swift and was visited in 1645 by the Papal legate, Cardinal Rinuccini. In 1652, Oliver Cromwell confiscated the estate and gave possession to Admiral William Penn, father of William Penn Jnr., the founder of the state of Pennsylvania in America. Through marriage, however, the McCarthy lineage was maintained in Macroom Castle.

The Castle demesne was developed as an area of leisure and beauty, with the natural features such as the river and magnificent oak trees being incorporated into a parkland of tree-lined avenues and walks, as well as orchards, gardens, grazing land and a deer park (situated on what is now Macroom Golf Course).

The Castle's last private owner was Lady Olive Ardilaun, sister of the late Earl of Bantry. She, with her husband Arthur Guinness MP (of brewing fame), moved in literary circles, counting William Butler Yeats and the other members of the Anglo-Irish literary movement among their friends. The structure of the Castle remained until 1967 when it was declared dangerous and subsequently demolished.

The beauty of Macroom Castle Demesne is there to be enjoyed by locals and visitors alike.

Wildlife , The Demesne is an area very rich in flora and fauna, particularly due to its maturity and its riverside location. It is a valuable educational resource for schoolchildren and adult enthusiasts alike. Many native trees have been planted here in the last 23 years by Macroom and District Environmental Group, some being from parent trees within the Demesne.

Wild flora include bryophytes in the under and upper canopies of the mature trees, lichens, mosses etc. At times it is possible to see otters, bats (several native species forage, roost and hunt). Swans (both mute and whooper), Irish stoat, foxes, rabbits and others. The Demesne is home to a wealth of native songbird species. . This historical marker was erected by National Development Plan and West Cork LEADER Co Op. It is in Macroom in County Cork Munster Ireland