Macroom and the Beautiful Lee Valley 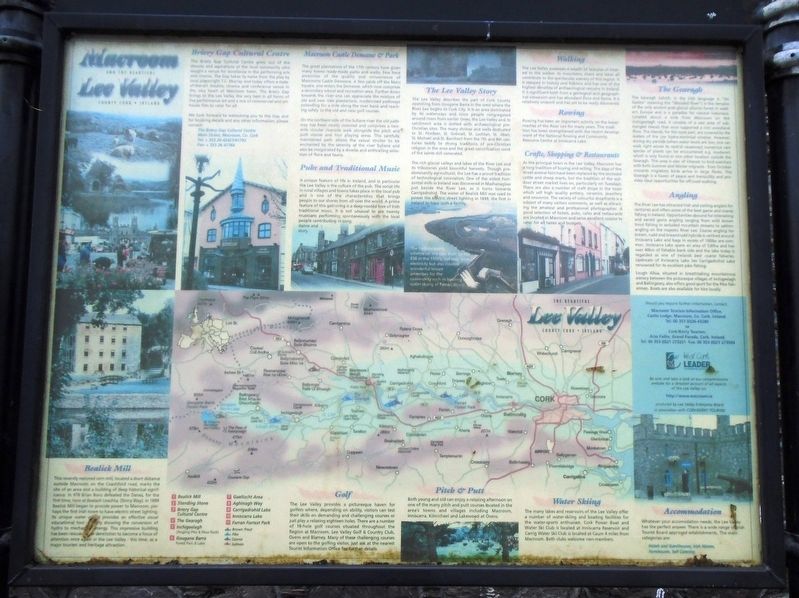 This recently restored corn mill, located a short distance outside Macroom on the Coachford road, marks the site of an area and a building of deep historical significance. In 978 Brian Boru defeated the Danes, for the first time, here at Bealach Leachta, (Stony Way). In 1899 Bealick Mill began to provide power to Macroom, perhaps the first Irish town to have electric street lighting. Its unique water wheel provides an effective visual educational tool - clearly[?] showing the conversion of hydro to mechanical energy. This impressive building has been rescued from dereliction to become a focus of attention once again in the Lee Valley - this time, as a major tourism and heritage attraction.

The Briery Gap Cultural Centre grew out of the dreams and aspirations of the local community who sought a venue for excellence in the performing arts and cinema. The Gap takes its name from the play by local playwright T.C. Murray and today offers a state-of-the-art theatre, cinema and conference venue in the very heart of Macroom town. The Briery Gap brings to the Lee Valley the very best in all forms of live performance art and a mix of commercial and art-house film to cater for all.

The great plantations of the 17th century have given many towns ready-made parks and walks. Few have amenities of the quality and convenience of Macroom[']s Castle Demesne. A few yards off the Main Square, one enters the Demesne, which now comprises a secondary school and recreation area. Further down towards the river one can appreciate the mixture of old and new tree plantations, modernised pathways extending for a mile along the river bank and reaching safely to the old and new golf courses.

On the northern side of the Sullane river the old pathway has been neatly restored and comprises a two-mile circular riverside walk alongside the pitch and putt course and four playing areas. This carefully maintained path allows the casual stroller to be enchanted by the serenity of the river Sullane and also be invigorated by a diverse and enthralling selection of flora and fauna.

The Lee Valley describes the part of Cork County stretching from Gougane Barra in the west where the River Lee begins to Cork City. It is an area dominated by its waterways and since people congregated around rivers from earlier times, the Lee Valley and its catchment area is dotted with archaeological pre-Christian sites. The many shrines and wells dedicated to St. Finnbarr, St. Gobnait, St. Lachtan, St. Aban, St. Michael and St. Berrihert from the 7th and 8th centuries testify to strong traditions of pre-Christian religion in the area and the great sanctification work of the saints still venerated.

The rich glacial valleys and lakes of the River Lee and its tributaries yield bountiful harvests. Though predominantly agricultural, the Lee has a proud tradition of technological innovation. One of the oldest horizontal mills in Ireland was discovered in Mashanaglass just beside the River Lee, as it turns towards Carrigadrohid. The water of Bealick Mill was used to power the electric street lighting in 1899, the first in Ireland to have such a facility.

The hydro-electric scheme on the Lee, built by the ESB in the 1950's, not only gave electricity but also created wonderful leisure amenities for the community such as boating and water-skiing at Farran Wood.

The Gearagh (which, in the Irish language is "An Gaoire" meaning the "Wooded River") is the remains of the only ancient post-glacial alluvial forest in western Europe and is a paradise for natural historians. Located about a mile from Macroon on the Inchigeelagh road, it consists of a vast area of submerged islands that once supported a rich wooland flora. The islands, for the most part, are covered by the waters of the Lee hydro-electrical scheme. However, during dry periods (when water levels are low, one can walk right across its central causeway) numerous rare species of plants can be encountered e.g. mudwort, which is only found in one other location outside the Gearagh. This area is also of interest to bird-watchers with both Summer and Winter migrants - from October onwards migratory birds arrive in large flocks. The Gearagh is a haven of peace and tranquility and provides ideal opportunities for off-road walking.

[Other portions of the marker are strictly tourist informational and not historical] . This historical marker was erected by West Cork LEADER Co-Operative Society, CORK/KERRY TOURISM. It is in Macroom in County Cork Munster Ireland