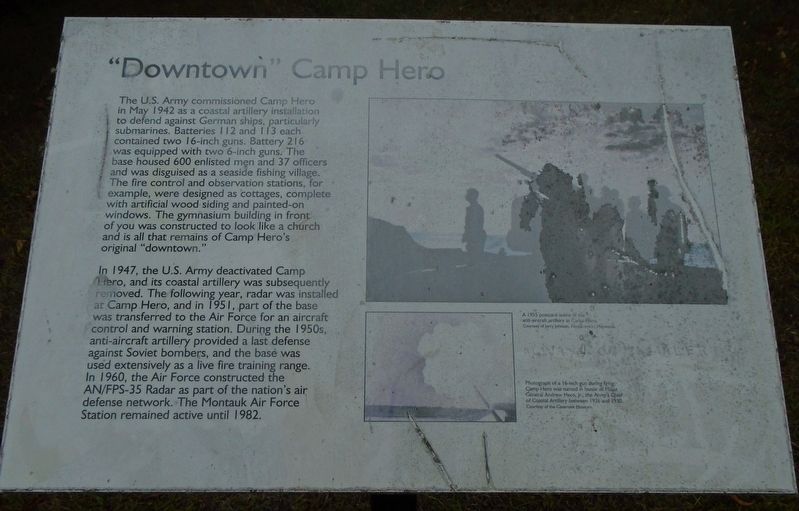 The U.S. Army commissioned Camp Hero in May 1942 as a coastal artillery installation to defend against German ships, particularly submarines. Batteries 112 and 113 each contained two 16-inch guns. Battery 216 was equipped with two 6-inch guns. The base housed 600 enlisted men and 37 officers and was disguised as a seaside fishing village. The fire control and observation stations, for example, were designed as cottages, complete with artificial wood siding and painted-on windows. The gymnasium building in front of you was constructed to look like a church and is all that remains of Camp Hero's original "downtown."

In 1947, the U.S. Army deactivated Camp Hero, and its coastal artillery was subsequently removed. The following year, radar was installed at Camp Hero, and in 1951, part of the base was transferred to the Air Force for an aircraft control and warning station. During the 1950s, anti-aircraft artillery provided a last defense against Soviet bombers, and the base was used extensively as a live fire training range. In 1960, the Air Force constructed the AN/FPS-35 Radar as part of the nation's air defense network. The Montauk Air Force Station remained active until 1982.

. A 1955 postcard scene of the anti-aircraft artillery at Camp Hero.

. Photograph of a 16-inch gun during firing. Camp Hero was named in honor of Major General Andrew Hero, Jr., the Army's Chief of Coastal Artillery between 1926 and 1930. . This historical marker was erected by New York State Parks. It is in Montauk Point in Suffolk County New York