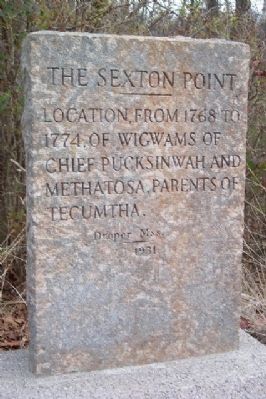 Photographed By William Fischer, Jr., November 14, 2008
1. The Sexton Point Marker
Inscription.
The Sexton Point. . Location, from 1768 to 1774, of wigwams of Chief Pucksinwah and Methatosa, parents of Tecumtha.
Draper Mss. . . This historical marker was erected in 1931 by Greene County Historical Society (probable). It is Near Oldtown in Greene County Ohio

Location, from 1768 to 1774, of wigwams of Chief Pucksinwah and Methatosa, parents of Tecumtha.
Draper Mss.

Topics. This historical marker is listed in these topic lists: Colonial Era • Native Americans • Settlements & Settlers. A significant historical year for this entry is 1768.

Location. 39° 43.464′ N, 83° 56.156′ W. Marker is near Oldtown, Ohio, in Greene County. Marker is on U.S. 68, on the left when traveling south. Marker is between Oldtown and Old Springfield Pike, about one mile north of Xenia and in the Xenia zip code area. Touch for map. Marker is in this post office area: Xenia OH 45385, United States of America. Touch for directions.

Other nearby markers. At least 8 other markers are within 3 miles of this marker, measured as the crow flies. The Bullskin Trail (a few steps from this marker); Birthplace of Tecumseh (about 700 feet away, measured in a direct line); U Mkvwalamakufewa Tikvmfa / Memorial to Tecumtha (approx. 0.3 miles away); Ten Kentucky Soldiers Memorial (approx. 0.3 miles away); Site of Old Chillicothe 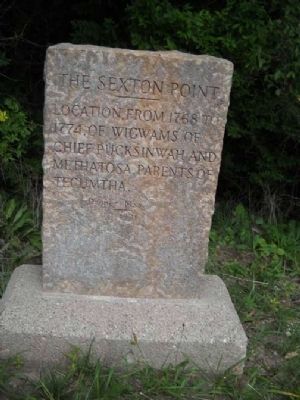 More about this marker. Draper Mss refers to the Draper Manuscript Collection, an extensive document collection relating to the early frontier, with predominate interest in the military and the men involved in frontier Indian warfare.

Additional commentary.
1. Missing Monument
One of the markers outside of Oldtown (the middle one of 3) has been missing/stolen for several years. I wonder who to contact to see about getting it replaced. Going south out of Oldtown towards Xenia, it is on the left. There is a place to pull off the highway. Actually nobody even mows around the marker since a local man moved way.
— Submitted December 9, 2013, by Connie Strayer of Xenia, Ohio. 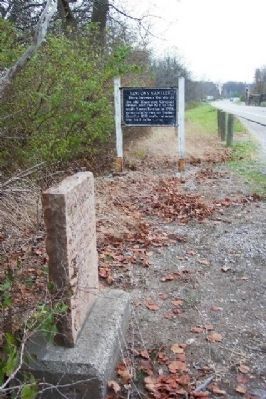