Millersburg Ferry: A Journey Through Time 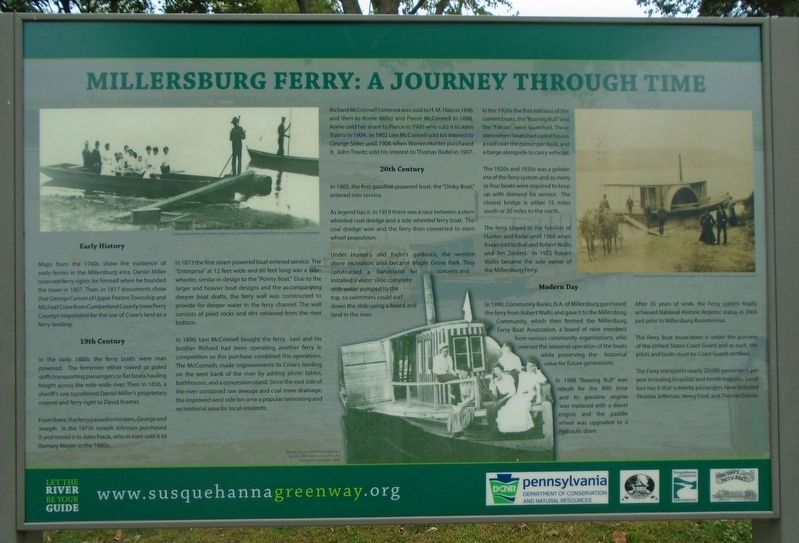 Maps from the 1760s show the existence of early ferries in the Millersburg area. Daniel Miller reserved ferry rights for himself when he founded the town in 1807. Then, in 1817 documents show that George Carson of Upper Paxton Township and Michael Crow from Cumberland County (now Perry County) negotiated for the use of Crow's land as a ferry landing.

In the early 1800s the ferry boats were man powered. The ferrymen either rowed or poled skiffs transporting passengers or flat boats hauling freight across the mile-wide river. Then in 1826, a sheriff's sale transferred Daniel Miller's proprietary reserve and ferry rights to David Kramer.

From there, the ferry passed to his sons, George and Joseph. In the 1870s Joseph Johnson purchased it and resold it to John Freck, who in turn sold it to Ramsey Moyer in the 1880s.

In 1873 the first steam powered boat entered service. The "Enterprise" at 12 feet wide and 60 feet long was a side-wheeler, similar in design to the "Pointy Boat." Due to the larger and heavier boat designs and the accompanying deeper boat drafts, the ferry wall was constructed to provide for deeper water in the ferry channel. The wall consists of piled rocks and dirt retrieved from the river bottom.

In 1890, Levi McConnell bought the ferry. Levi and his brother Richard had been operating another ferry in competition so this purchase combined the operations. The McConnells made improvements to Crow's landing on the west bank of the river by adding picnic tables, bathhouses, and a concession stand. Since the east side of the river contained raw sewage and coal mine drainage, the improved west side became a popular swimming and recreational area for local residents.

In 1905, the first gasoline powered boat, the "Dinky Boat." entered into service.

As legend has it, in 1919 there was a race between a stern wheeled coal dredge and a side wheeled ferry boat. The coal dredge won and the ferry was converted to stern wheel propulsion.

Under Hunter's and Radel's guidance, the western shore recreation area became Maple Grove Park. They constructed a bandstand for concerts and installed a water slide complete with water pumped to the top, so swimmers could surf down the slide using a board and land in the river.

In the 1920s the first editions of the current boats, the "Roaring Bull" and the "Falcon", were launched. These stern wheel boats had a pilot house, a roof over the passenger deck, and a barge alongside to carry vehicles.

The 1920s and 1930s was a golden era of the ferry system and as many as four boats were required to keep up with demand for service. The closest bridge is either 15 miles south or 30 miles to the north.

The ferry stayed in the families of Hunter and Radel until 1968 when it was sold to Bud and Robert Wallis and Jim Zeiders. In 1972 Robert Wallis became the sole owner of the Millersburg Ferry.

In 1990, Community Banks, N.A. of Millersburg purchased the ferry from Robert Wallis and give it to the Millersburg Community, which then formed the Millersburg Ferry Boat Association, a board of nine members from various community organizations, who oversee the seasonal operation of the boats while preserving the historical value for future generations.

In 1998 "Roaring Bull" was rebuilt for the fifth time and its gasoline engine was replaced with a diesel engine and the paddle wheel was upgraded to a hydraulic drive.

After 35 years of work, the Ferry system finally achieved National Historic Register status in 2006 just prior to [the] Millersburg Bicentennial.

The Ferry Boat Association is under the purview of the United States Coast Guard and as such, the pilots and boats must be Coast Guard certified.

The Ferry transports nearly 20,000 passengers per year including bicyclists and Amish buggies. Local lore has it that celebrity passengers have included Thomas Jefferson, Henry Ford, and Thomas Edison.

[Photo captions, left to right, read] . A group of well-dressed citizens prepares to cross the Susquehanna River in an early 22 foot pole boat.

. Ramsey Moyer and family enjoying a Sunday afternoon on the good ship "Enterprise" during the 1890s.

. Passengers disembark from the "Pointy Boat" on October 10th, 1905. The side-wheel boats were steam-powered. . This historical marker was erected by City of Millersburg, Susquehanna Greenway Partnership, PA DCNR, and the Millerburg Ferry Boat. It is in Millersburg in Dauphin County Pennsylvania