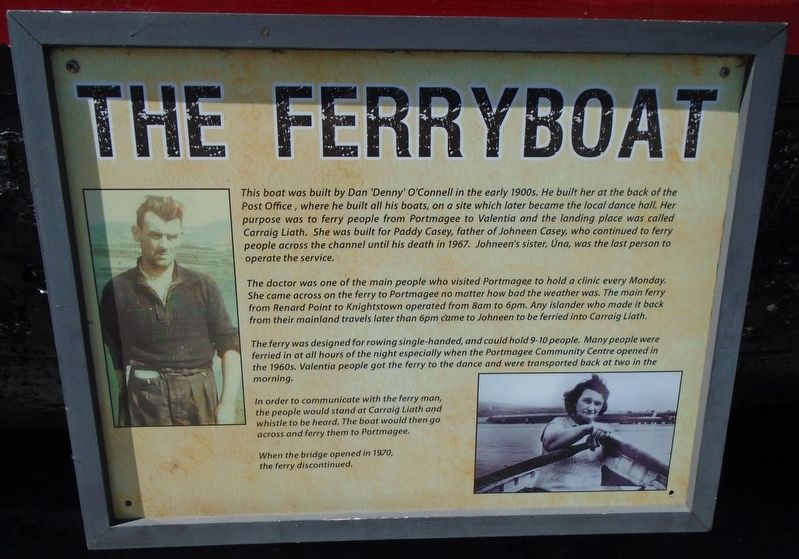 This boat was built by Dan 'Denny' O'Connell in the early 1900s. He built her at the back of the Post Office, where he built all his boats, on a site which later became the local dance hall. Her purpose was to ferry people from Portmagee to Valentia and the landing place was called Carraig Liath. She was built for Paddy Casey, father of Johneen Casey, who continued to ferry people across the channel until his death in 1967. Johneen's sister, Úna, was the last person to operate the service.

The doctor was one of the main people who visited Portmagee to hold a clinic every Monday. She came across on the ferry to Portmagee no matter how bad the weather was. The main ferry from Renard Point to Knightstown operated from 8am to 6pm. Any islander who made it back from their mainland travels later than 6pm came to Johneen to be ferried into Carraigh Liath.

The ferry was designed for rowing single-handed, and could hold 9-10 people. Many people were ferried in at all hours of the night especially when the Portmagee Community Centre opened in the 1960s. Valentia people got the ferry to the dance and were transported back at two in the morning.

In order to communicate with the ferry man, the people would stand at Carraig Liath and whistle to be heard. The boat would then go across and ferry them to Portmagee.

When the bridge opened in 1970, the ferry discontinued.

. This historical marker is in Portmagee in County Kerry Munster Ireland