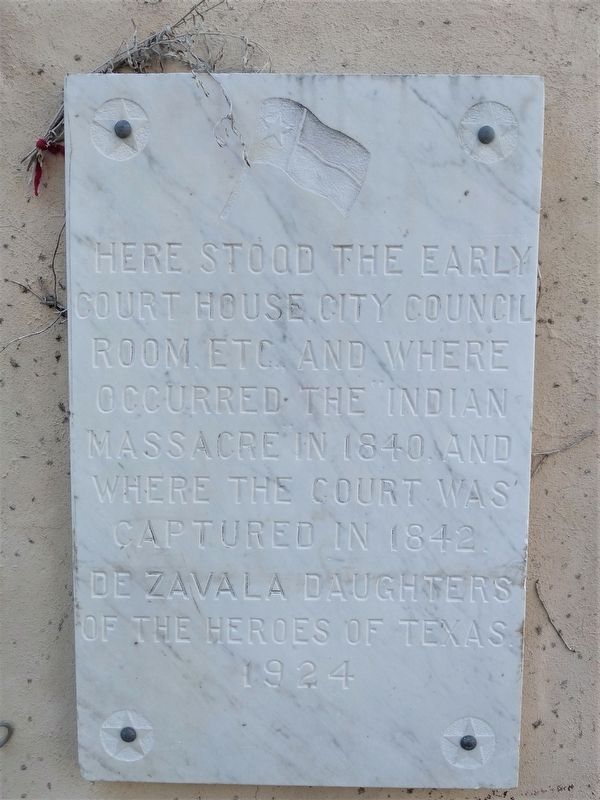 Here stood the early Court House, City Council Room, etc., and where occurred the Indian Massacre in 1840, and where the Court was captured in 1842.

De Zavala Daughters of the Heroes of Texas.
1924.

Erected 1924 by De Zavala Daughters of the Heroes of Texas.

Topics. This historical marker is listed in these topic lists: Native Americans • War, Texas Independence • Wars, US Indian. A significant historical year for this entry is 1840.

Location. 29° 25.47′ N, 98° 29.585′ W. Marker is in San Antonio, Texas, in Bexar County. Marker is on Main Plaza just north of West Market Street, on the right when traveling north. Marker is on the north wall of the building located on the southeast corner of the Main Plaza in San Antonio. The marker is easily missed as it blends into the wall. Touch for map. Marker is at or near this postal address: 114 Main Plaza, San Antonio TX 78205, United States of America. Touch for directions. 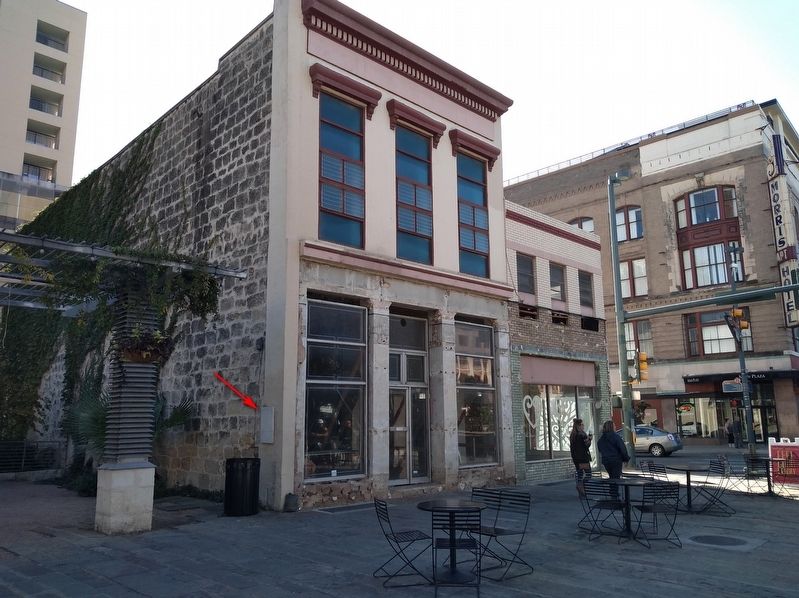 Also see . . .
1. Council House Fight, Handbook of Texas. What is variously called the Council House Fight, or Council House Massacre, was a pivotal moment in Texas history creating bitter relations between Comanches and Texans for years to come. The events of 1840 began with the Council House Fight in San Antonio, March 1840 in which Republic of Texas officials attempted to capture and take prisoner a large number of Comanche chiefs who had come to negotiate a peace treaty, killing them together with dozens of their family and followers. The Comanches retaliated with a raid in August led by war chief Buffalo Hump, on Victoria and the Port of Linnville, on Lavaca Bay, Texas. This raid is said to be the largest raid by American Indians on cities in U.S. history. Linnville was sacked and burned by the Comanches, and the port was never rebuilt. Citizens of Linnville escaped to safety by taking to small boats and a schooner in the waters off the bay, watching as their town was burned to the ground. The Battle of Plum Creek, near Lockhart Texas, shortly after the raid on Linnville, was Texans' retaliation against Comanches in their retreat from Linnville. And finally, the Comanche village massacre, by an expedition commanded by Colonel John Henry Moore in October 1840, was further revenge by Texans for the raid on Victoria and Linnville by striking Penateka Comanches in their homeland near what is now Colorado City. (Submitted on November 9, 2019, by Richard Denney of Austin, Texas.)