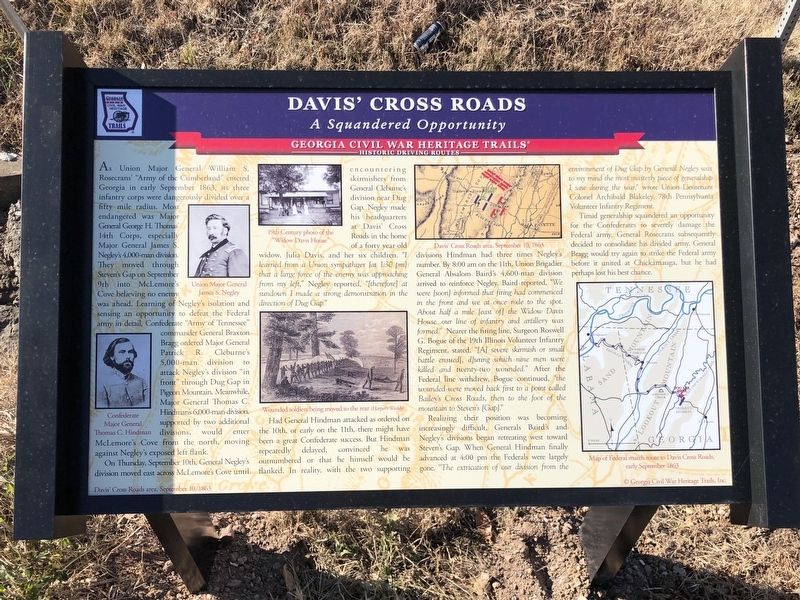 On Thursday, September 10th, General Negley's division moved east across McLemore's Cove until encountering skirmishers from General Cleburne's division near Dug Gap. Negley made his headquarters at Davis' Cross Roads in the home of a forty year old widow, Julia Davis, and her six children.

Had General Hindman attacked as ordered on the 10th, or early on the 11th, there might have been a great Confederate success. But Hindman repeatedly delayed, convinced he was outnumbered or that he himself would be flanked. In reality, with the two supporting divisions Hindman had three times Negley's number. By 8:00 am on the 11th, Union Brigadier General Absalom Baird's 4,600-man division arrived to reinforce Negley. Baird reported, "We were [soon] informed that firing had commenced in the front and we at once rode to the spot. About half a mile ſeast of] the Widow Davis House...our line of infantry and artillery was formed." Nearer the firing line, Surgeon Roswell G. Bogue of the 19th Illinois Volunteer Infantry Regiment, stated, “[A] severe skirmish or small battle ensued[, d]uring which nine men were killed and twenty-two wounded.” After the Federal line withdrew, Bogue continued, “the wounded were moved back first to a point called Bailey's Cross Roads, then to the foot of the mountain to Steven's [Gap]."

Realizing their position was becoming increasingly difficult, Generals Baird's and Negley's divisions began retreating west toward Steven's Gap. When General Hindman finally advanced at 4:00 pm the Federals were largely gone. "The extrication of our division from the environment of Dug Gap by General Negley was to my mind the most masterly piece of generalship I saw during the war," wrote Union Lieutenant Colonel Archibald Blakeley, 78th Pennsylvania Volunteer Infantry Regiment.

Timid generalship squandered an opportunity for the Confederates to severely damage the Federal army. General Rosecrans subsequently decided to consolidate his divided army. General Bragg would try again to strike the Federal army before it united at Chickamauga, but he had perhaps lost his best chance. . This historical marker was erected in 2019 by Georgia Civil War Heritage Trails, Inc.. It is in Davis Crossroads in Walker County Georgia

On Thursday, September 10th, General Negley's division moved east across McLemore's Cove until encountering skirmishers from General Cleburne's division near Dug Gap. Negley made his headquarters at Davis' Cross Roads in the 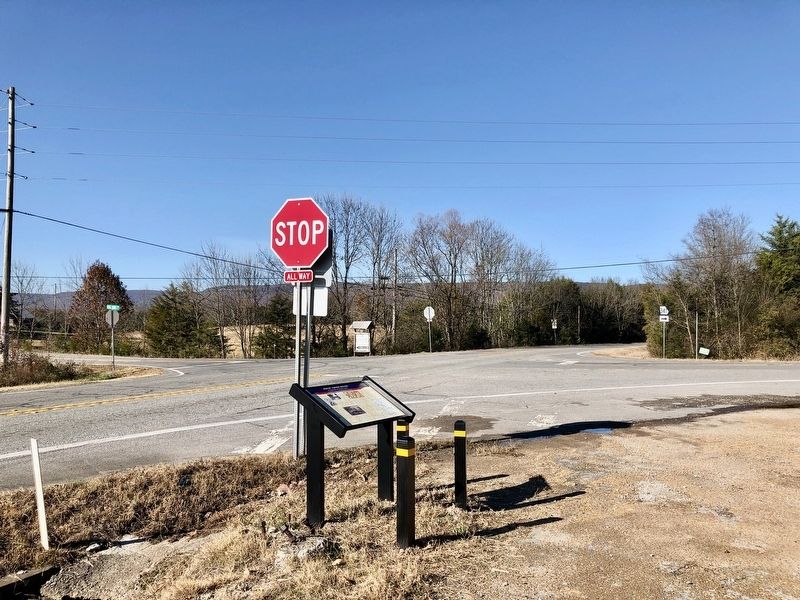 Photographed By Mark Hilton, November 20, 2019
2. View of the Davis' Cross Roads and Marker.

Click or scan to see
this page online
home of a forty year old widow, Julia Davis, and her six children.
Share this page.