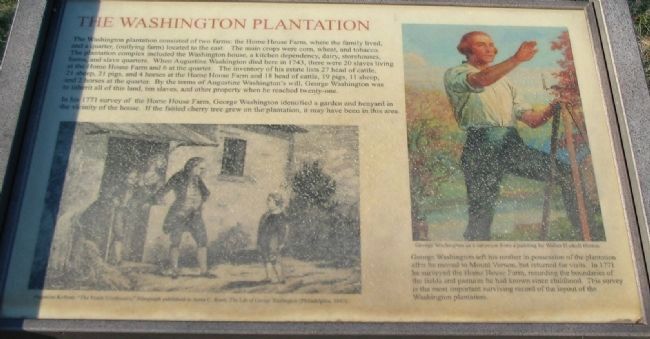 The Washington plantation consisted of two farms: the Home House Farm, where the family lived, and a quarter, (outlying farm) located to the east. The main crops were corn, wheat, and tobacco. The plantation complex included the Washington house, a kitchen dependency, dairy, storehouses, barns, and slave quarters. When Augustine Washington died here in 1743, there were 20 slaves living at the Home House Farm and 6 at the quarter. The inventory of his estate lists 27 head of cattle, 21 sheep, 21 pigs, and 4 horses at Home House Farm and 18 head of cattle, 19 pigs, 11 sheep, and 2 horses at the quarter. By the terms of Augustine Washington's will, George Washington was to inherit all of this land, ten slaves, and other property when he reached twenty-one.

In his 1771 survey of the Home House Farm, George Washington identified a garden and henyard in the vicinity of the house. If the fabled cherry tree grew on the plantation, it may have been in this area.

George Washington left his mother in possession of the plantation after he moved to Mount Vernon, but returned for visits. In 1771 he surveyed the Home House Farm, recording the 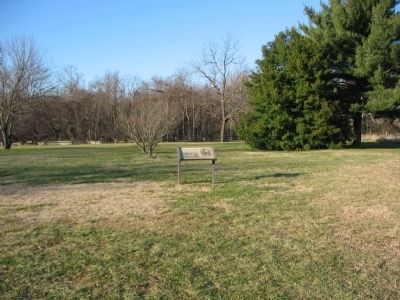 Click or scan to see
this page online
boundaries of the fields and pastures he had known since childhood. This survey is the most important surviving record of the layout of the Washington plantation.

Topics and series. This historical marker is listed in these topic lists: African Americans • Agriculture • Colonial Era • Settlements & Settlers. In addition, it is included in the Former U.S. Presidents: #01 George Washington series list. A significant historical year for this entry is 1743.

Location. 38° 17.735′ N, 77° 26.974′ W. Marker is near Fredericksburg, Virginia, in Stafford County. Marker can be reached from Kings Highway (State Highway 3), on the right when traveling south. Located on the walking trail for the Washington's Boyhood Home site. Touch for map. Marker is at or near this postal address: 240 Kings Hwy, Fredericksburg VA 22405, United States of America. Touch for directions. 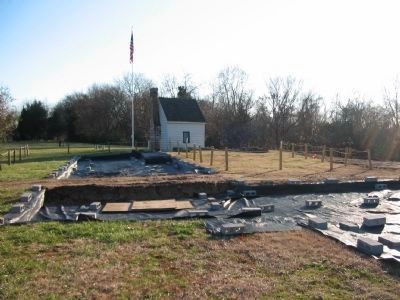 Photographed By Craig Swain, December 13, 2008
3. Ongoing Excavations around the House Foundation
In the summer of 2008 archeologists announced the discovery of Washington's boyhood home. The home had burned in a 1740 Christmas Eve fire. The white building behind the dig sites is the Surveyor's Shed, which dates to 1870.
(approx. 0.2 miles away); Fredericksburg City Dock (approx. ¼ mile away). Touch for a list and map of all markers in Fredericksburg.

More about this marker. In the lower left of the marker is a drawing, published in Anna C. Reed's The Life of George Washington from 1842, depicting the famous cherry tree incident. On the right is a depiction of George Washington as a surveyor from by Walter Haskell Hinton.