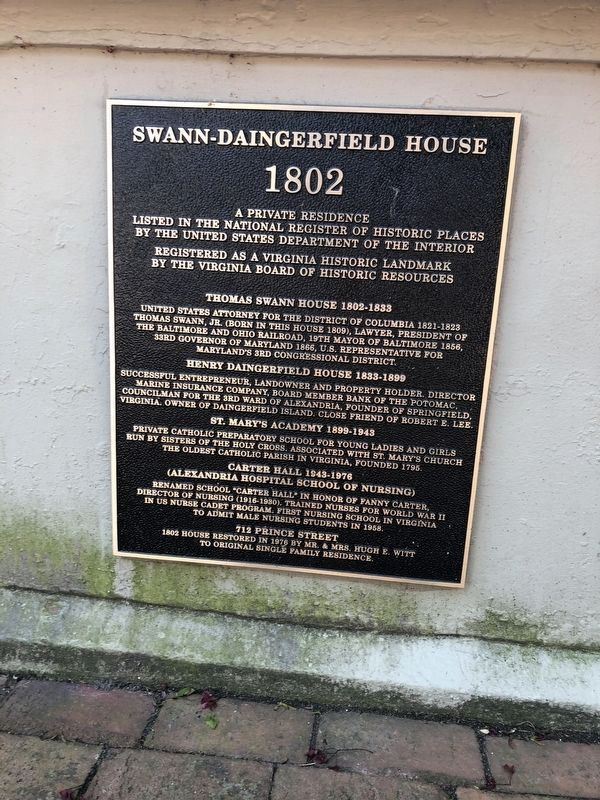 A private residence listed in the National Register of Historic Places by the United States Department of the Interior. Registered as a Virginia Historic Landmark by the Virginia Board of Historic Resources. 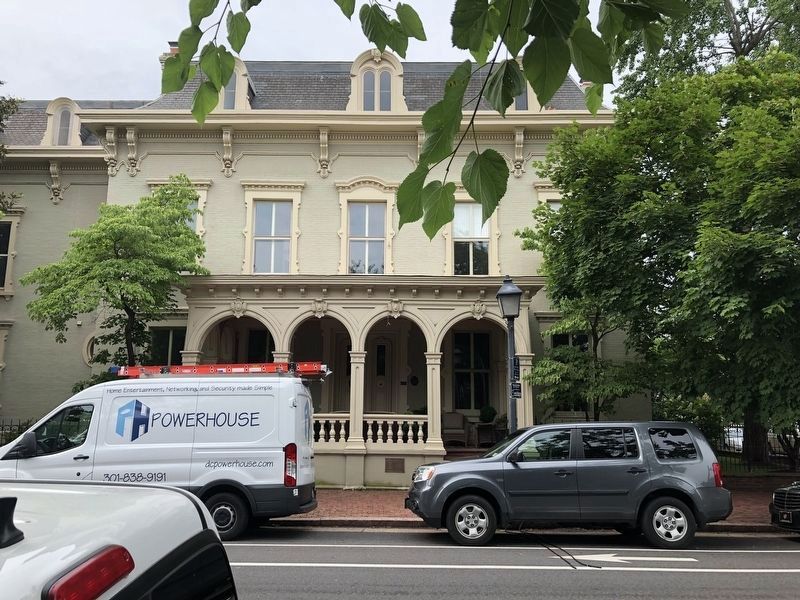 By Devry Becker Jones, June 7, 2019
2. Swann-Daingerfield House
This photograph shows the old marker below the porch balustrade between the two vehicles. This new marker has been placed at the same location.

Click or scan to see
this page online
parish in Virginia, founded in 1795.

Topics and series. This historical marker is listed in these topic lists: Education • Industry & Commerce • Railroads & Streetcars • Science & Medicine • Settlements & Settlers • War, World II • Women. In addition, it is included in the Baltimore and Ohio Railroad (B&O) 🚂 series list. A significant historical year for this entry is 1802.

Location. 38° 48.237′ N, 77° 2.886′ W. Marker is in the Historical District in Alexandria, Virginia. Marker is on Prince Street east of South Columbus Street, on the right when traveling east. Touch for map. Marker is at or near this postal address: 712 Prince Street, Alexandria VA 22314, United States of America. Touch for directions. 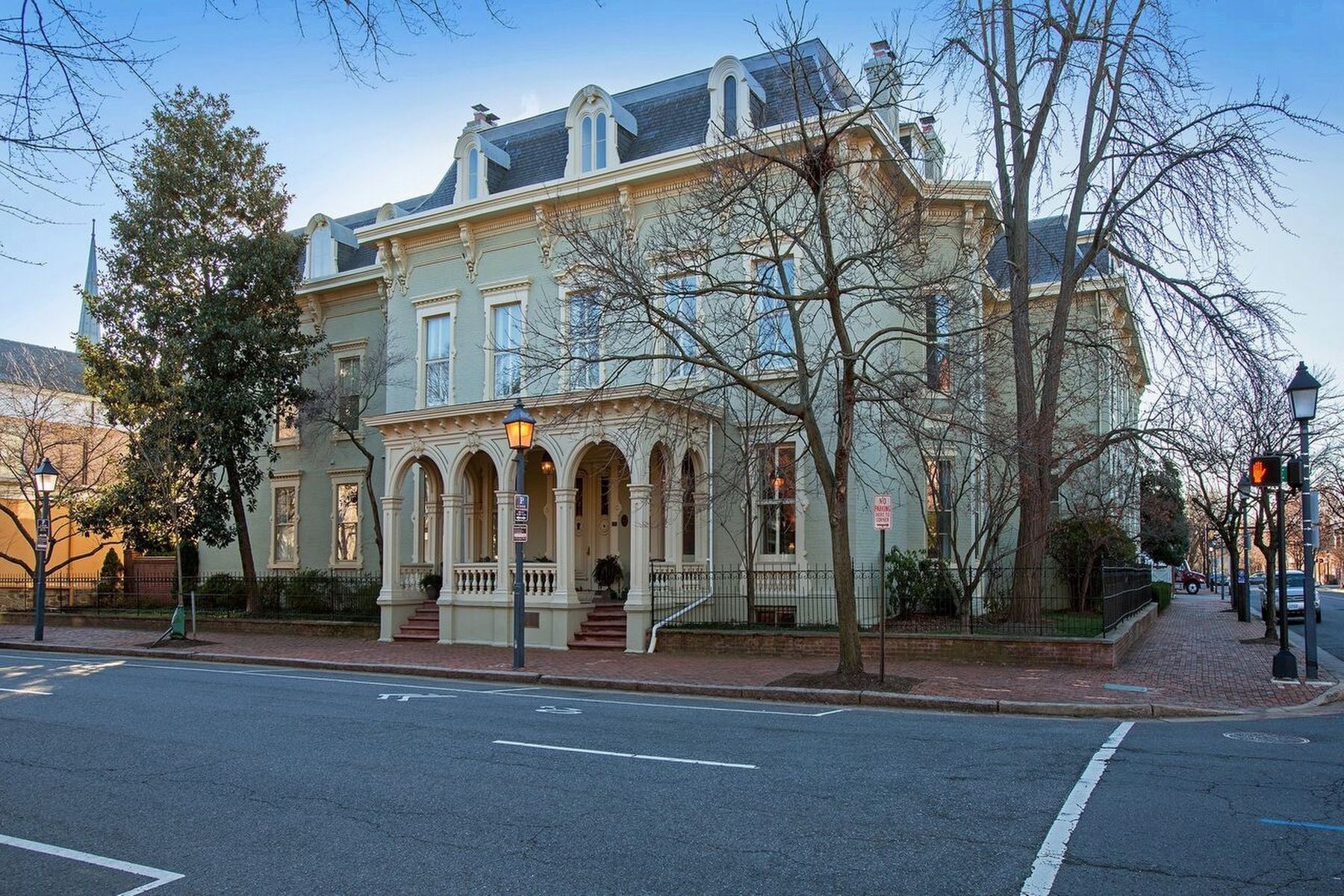 Regarding Swann-Daingerfield House. This house is a private residence.

Related marker. Click here for another marker that is related to this marker. This link is to the old plaque that stood where this plaque is now placed.

In 1832, Henry Daingerfield, the founder of Springfield, Virginia, a thriving community south of Alexandria, purchased the house and it was where he resided until his death in 1866. Henry Daingerfield, a successful entrepreneur, was a close friend of Robert E. Lee whom he often 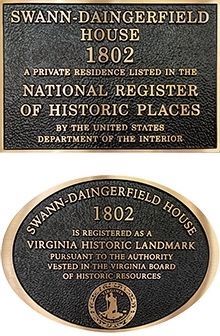 4. NRHP and VHL Plaques
entertained in the House. An Alexandria City list for 1855 reveals that “Henry Daingerfield was the highest assessed property holder in the community and the owner of stores, warehouses, wharves, a flourishing farm, and a large private residence.”

(Submitted on March 1, 2020, by James Haybyrne of Alexandria, Virginia.)

The Swann-Daingerfield House is a rare example of high-style Second Empire architecture in Alexandria, a city known primarily for its Colonial, Georgian, and Federal architecture, and is therefore locally significant under Criterion C in the area of Architecture. Originally built in 1800 for Thomas Swann, a U.S. Attorney for the District of Columbia (1821-1833), the Swann- Daingerfield House next was occupied by three generations of the Daingerfield family, notable Alexandrians who renovated the Federal-style house to include some Greek Revival interior finishes, before commissioning the ca. 1880 remodeling of the exterior to reflect the Second Empire style.

From 1899 until 1941, the property served as the locus of St. Mary’s Academy, a private Catholic secondary school for girls founded in Alexandria by the Sisters of the Holy Cross in 1869. The Sisters were responsible for expanding the house with two large Second Empire-style annexes in 1899 and 1906. Its role as an educational facility continued for three decades from 1943, when the Alexandria Hospital School of Nursing purchased the property and converted it into a dormitory for nurses-in-training.

Given its decades-long history and evolution in service of two notable educational institutions, the Swann-Daingerfield House is also locally significant under Criterion A in the area of Education. The house’s preserved and restored Federal and Greek Revival-style interiors and its Second Empire exterior tell a complex narrative of Alexandria’s built evolution over the span of two centuries. The period of significance, beginning in 1800, the original date of construction, and ending in 1973, when the property ceased operation as a nursing school, encompasses the evolving role of the house within Old Town Alexandria throughout the 19th century and the first three-quarters of the 20th century.