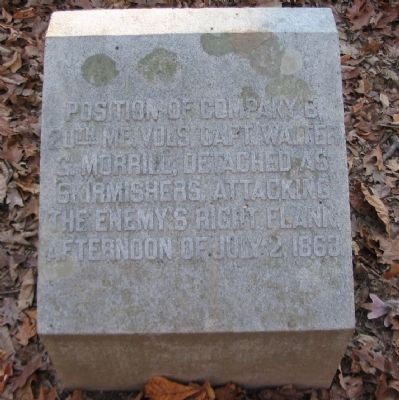 Topics. This memorial is listed in this topic list: War, US Civil. A significant historical date for this entry is July 2, 1932.

Location. 39° 47.322′ N, 77° 14.091′ W. Marker is in Cumberland Township, Pennsylvania, in Adams County. Memorial is on Wright Avenue, on the right when traveling west. Located southeast of Little Round Top in Gettysburg National Military Park. Touch for map. Marker is in this post office area: Gettysburg PA 17325, United States of America. Touch for directions.

Related markers. Click here for a list of markers that are related to this marker. 20th Maine at Gettysburg. 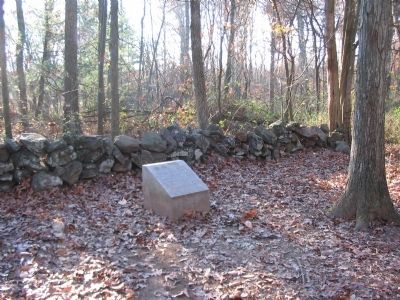 Photographed By Craig Swain, November 11, 2008
2. Company B, 20th Maine Marker
The marker stands beside a stone wall, behind which the detachment took cover.

Click or scan to see
this page online
Report of Col. Joshua L. Chamberlain. Chamberlain records the effect of Morrill's skirmishers as the 20th Maine surged forward:
Meantime Captain Morrill with his skirmishers (sent out from my left flank), with some dozen or fifteen of the U.S. Sharpshooters who had put themselves under his direction, fell upon the enemy as they were breaking, and by his demonstrations, as well as his well-directed fire, added much to the effect of the charge. (Submitted on January 2, 2009, by Craig Swain of Leesburg, Virginia.) 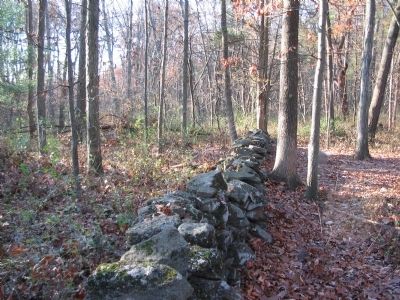 Photographed By Craig Swain, November 11, 2008
3. The Stone Wall
In the late afternoon of July 2, Captain Morrill commanded a detachment of over 40 men from Company B, 20th Maine, reinforced by some men from the 2nd US Sharpshooters, which held this wall to prevent a wide flanking maneuver by the Confederates. When the main body of the 20th Maine made their famous bayonet charge, the men of Company B rose and fired on the reeling 15th Alabama. The ground east of the stone wall was open field at the time of the battle.
Credits. This page was last revised on December 2, 2020. It was originally submitted on January 2, 2009, by Craig Swain of Leesburg, Virginia. This page has been viewed 2,083 times since then and 90 times this year. Photos:   1, 2, 3. submitted on January 2, 2009, by Craig Swain of Leesburg, Virginia.
Share this page.