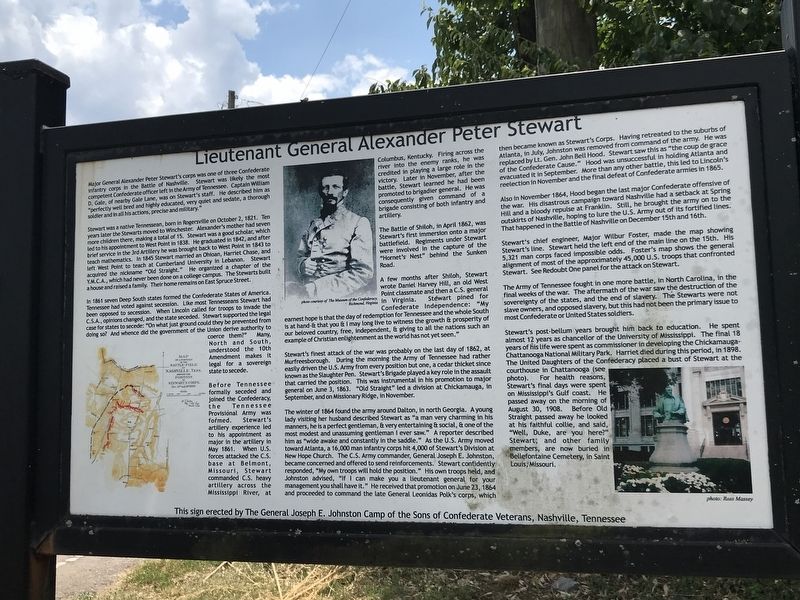 Major General Alexander Peter Stewart's corps was one of three Confederate infantry corps in the Battle of Nashville. Stewart was likely the most competent Confederate officer left in the Army of Tennessee. Captain William D. Gale, of nearby Gale Lane, was on Stewart's staff. He described him as “perfectly well bred and highly educated, very quiet and sedate, a thorough soldier and in all his actions, precise and military.”

Stewart was a native Tennessean, born in Rogersville on October 2, 1821. Ten years later the Stewarts moved to Winchester. Alexander's mother had seven more children there, making a total of 15. Stewart was a good scholar, which led to his appointment to West Point in 1838. He graduated in 1842, and after brief service in the 3rd Artillery he was brought back to West Point in 1843 to teach mathematics. In 1845 Stewart married an Ohioan, Harriet Chase, and left West Point to teach at Cumberland University in Lebanon. Stewart acquired the nickname “Old Straight.” He organized a chapter of the Y.M.C.A., which had never been done on a college campus. The Stewarts built a house and raised a family. 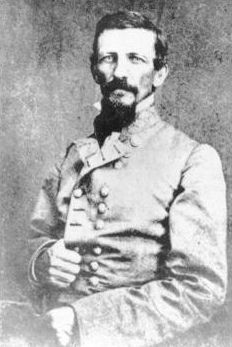 Click or scan to see
this page online
Their home remains on East Spruce Street.

In 1861 seven Deep South states formed the Confederate States of America. Tennessee had voted against secession. Like most Tennesseans Stewart had been opposed to secession. When Lincoln called for troops to invade the C.S.A., opinions changed, and the state seceded. Stewart supported the legal case for states to secede: “On what just ground could they be prevented from doing so? And whence did government of the Union derive authority to coerce them?” Many, North and South, understood the 10th Amendment makes it legal for a sovereign state to secede.

Before Tennessee formally seceded and joined the Confederacy, the Tennessee Provisional Army was formed. Stewart's artillery experience led to his appointment as major in the artillery in May 1861. When U.S. forces attacked the C.S. base at Belmont, Missouri, Stewart commanded C.S. heavy artillery across the Mississippi River, at Columbus, Kentucky. Firing across the river into the enemy ranks, he was credited in playing a large role in the victory. Later in November, after the battle, Stewart learned he had been promoted to brigadier general. He was consequently given command of a brigade consisting of both infantry and artillery.

The Battle of Shiloh, in April 1862, was Stewart's first immersion into a major battlefield. Regiments under Stewart 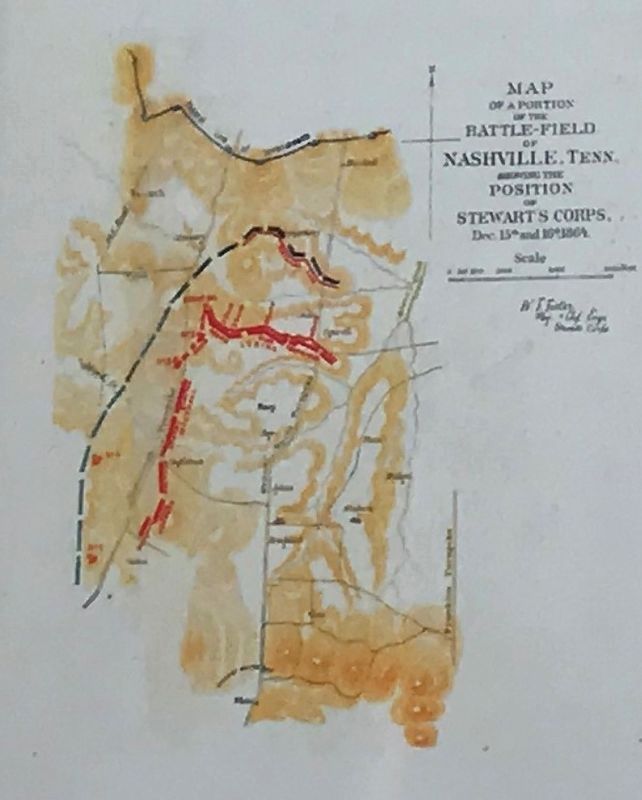 By Duane and Tracy Marsteller, June 20, 2020
3. Lieutenant General Alexander Peter Stewart Marker detail
Battle of Nashville map drawn by Maj. Wilbur Foster (CSA)
were involved in the capture of the “Hornet's Nest” behind the Sunken Road.

A few months after Shiloh, Stewart wrote Daniel Harvey Hill, an old West Point classmate and then a C.S. general in Virginia. Stewart pined for Confederate independence: “My earnest hope is that the day of redemption for Tennessee and the whole South is at hand - & that you & I may long live to witness the growth & prosperity of our beloved country, free, independent, & giving to all the nations such an example of Christian enlightenment as the world has not yet seen.”

Stewart's finest attack of the war was probably on the last day of 1862, at Murfreesborough. During the morning the Army of Tennessee had rather easily driven the U.S. Army from every position but one, a cedar thicket since known as the Slaughter Pen. Stewart's Brigade played a key role in the assault that carried the position. This was instrumental in his promotion to major general on June 3, 1863. “Old Straight” led a division at Chickamauga, in September, and on Missionary Ridge, in November.

The winter of 1864 found the army around Dalton, in north Georgia. A young lady visiting her husband described Stewart as “a man very charming in his manners, he is a perfect gentleman, & very entertaining & social, & one of the most modest and unassuming gentleman I ever saw.” 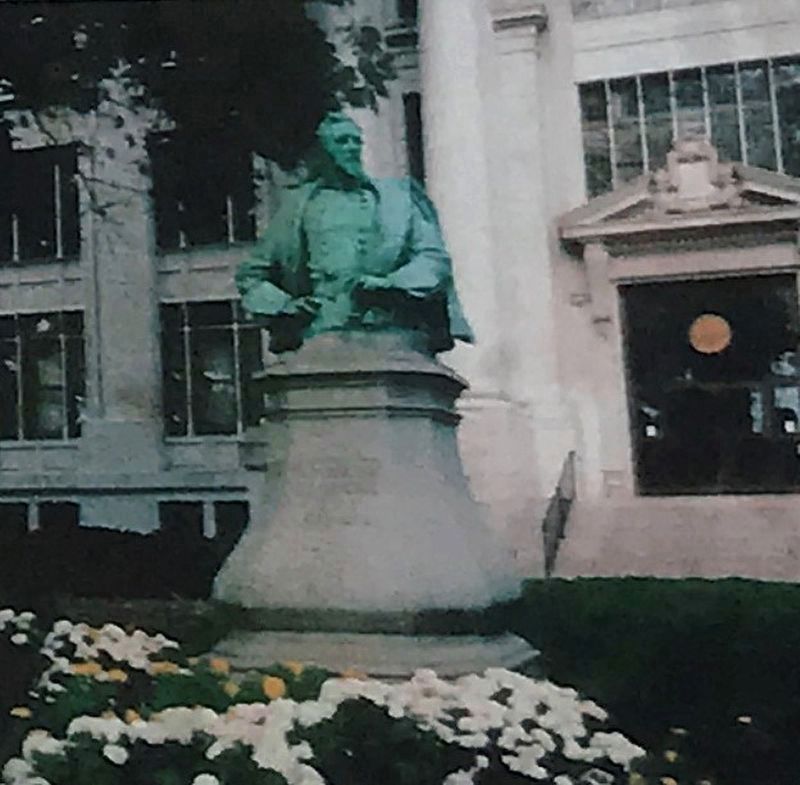 Duane and Tracy Marsteller / Original photo by Ross Massey, June 20, 2020
4. Lieutenant General Alexander Peter Stewart Marker detail
Bust of him located outside the Hamilton County Courthouse in Chattanooga, Tenn. (as of June 1, 2020)
A reporter described him as “wide awake and constantly in the saddle.” As the U.S. Army moved toward Atlanta, a 16,000 man infantry corps hit 4,000 of Stewart's Division at New Hope Church. The C.S. Army commander, General Joseph E. Johnston, became concerned and offered to send reinforcements. Stewart confidently responded, “My own troops will hold the position.” His own troops held, and Johnston advised, “If I can make you a lieutenant general for your management you shall have it.” He received that promotion on June 23, 1864 and proceeded to command the late General Leonidas Polk's corps, which then became known as Stewart's Corps. Having retreated to the suburbs of Atlanta, in July, Johnston was removed from command of the army. He was replaced by Lt. Gen. John Bell Hood. Stewart saw this as “the coup de grace of the Confederate Cause.” Hood was unsuccessful in holding Atlanta and evacuated it in September. More than any other battle, this led to Lincoln's reelection in November and the final defeat of the Confederate armies in 1865.

Also in November 1864 , Hood began the last last major Confederate offensive of the war. His disastrous campaign toward Nashville had a setback at Spring Hill and a bloody repulse at Franklin. Still, he brought the army on to the outskirts of Nashville, hoping to lure the U.S. Army out 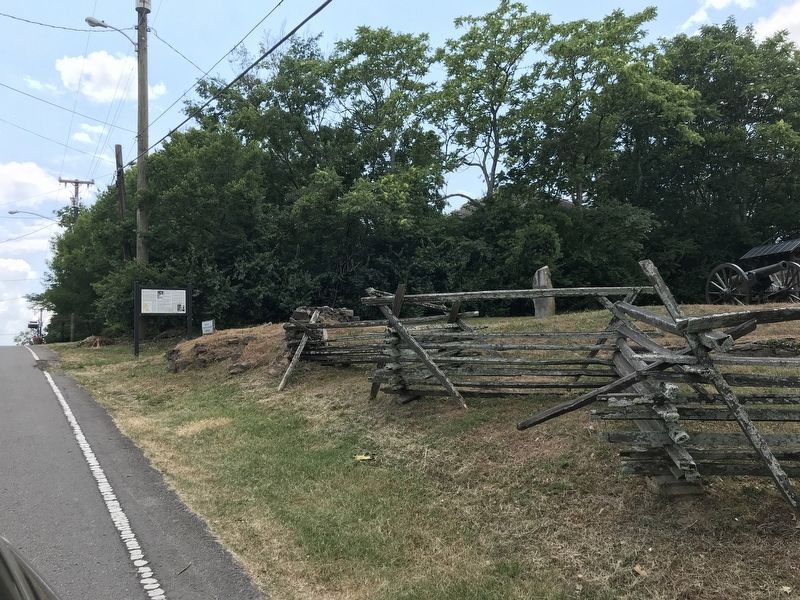 By Duane and Tracy Marsteller, June 20, 2020
5. Lieutenant General Alexander Peter Stewart Marker
of its fortified lines. That happened in the Battle of Nashville on December 15th and 16th.

Stewart's chief engineer, Major Wilbur Foster, made the map showing Stewart's line. Stewart held the left end of the main line on the 15th. His 5,321 man corps faced impossible odds. Foster's map shows the general alignment of most of the approximately 45,000 U.S. troops that confronted Stewart. See Redoubt One panel for the attack on Stewart.

The Army of Tennessee fought in one more battle, in North Carolina, in the final weeks of the war. The aftermath of the war saw the destruction of the sovereignty of the states, and the end of slavery. The Stewarts were not slave owners, and opposed slavery, but this had not been the primary issue to most Confederate or United States soldiers.

Stewart's post-bellum years brought him back to education. He spent almost 12 years as chancellor of the University of Mississippi. The final 18 years of his life were spent as commissioner in developing the Chickamauga-Chattanooga National Military Park. Harriet died during this period, in 1898. The United Daughters of the Confederacy placed a bust of Stewart at the courthouse in Chattanooga (see photo). For health reasons, Stewart's final days were spent on Mississippi's Gulf Coast. He passed away on the morning of August 30, 1908. Before Old Straight passed away he looked at his faithful collie, and said, “Well, Duke, are you here?” Stewart, and other family members, are now buried in Bellefontaine Cemetery, in Saint Louis, Missouri.

Topics. This memorial is listed in these topic lists: Education • Parks & Recreational Areas • War, US Civil. A significant historical month for this entry is April 1862.

Location. 36° 6.918′ N, 86° 48.455′ W. Marker is in Nashville, Tennessee, in Davidson County. Memorial is on Benham Avenue 0.1 miles north of Woodmont Boulevard (Tennessee Route 155), on the left when traveling north. Marker is at the site of Confederate Redoubt No. 1. Touch for map. Marker is at or near this postal address: 3421 Benham Avenue, Nashville TN 37215, United States of America. Touch for directions.