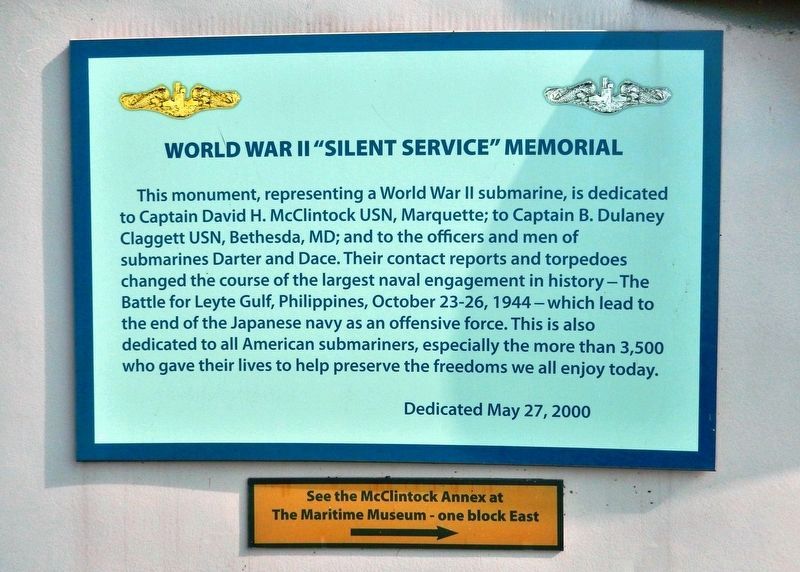 Photographed By Cosmos Mariner, August 1, 2017
1. World War II "Silent Service" Memorial Marker
Inscription.
World War II "Silent Service" Memorial. . This monument, representing a World War II submarine, is dedicated to Captain David H. McClintock USN, Marquette; to Captain B. Dulaney Claggett USN, Bethesda, MD; and to the officers and men of submarines Darter and Dace. Their contact reports and torpedoes changed the course of the largest naval engagement in history , The Battle for Leyte Gulf, Philippines, October 23-26, 1944 , which lead to the end of the Japanese navy as an offensive force. This is also dedicated to all American submariners, especially the more than 3,500 who gave their lives to help preserve the freedoms we all enjoy today., Dedicated May 27, 2000 , See the McClintock Annex at The Maritime Museum – one block east . This memorial was erected in 2000. It is in Marquette in Marquette County Michigan

This monument, representing a World War II submarine, is dedicated to Captain David H. McClintock USN, Marquette; to Captain B. Dulaney Claggett USN, Bethesda, MD; and to the officers and men of submarines Darter and Dace. Their contact reports and torpedoes changed the course of the largest naval engagement in history — The Battle for Leyte Gulf, Philippines, October 23-26, 1944 — which lead to the end of the Japanese navy as an offensive force. This is also dedicated to all American submariners, especially the more than 3,500 who gave their lives to help preserve the freedoms we all enjoy today.

Dedicated May 27, 2000
See the McClintock Annex at The Maritime Museum – one block east

Topics and series. This memorial is listed in these topic lists: War, World II • Waterways & Vessels. In addition, it is included in the Distinguished Service Cross/Navy Cross/Air Force Cross Recipients series list. A significant historical date for this entry is October 23, 1944. 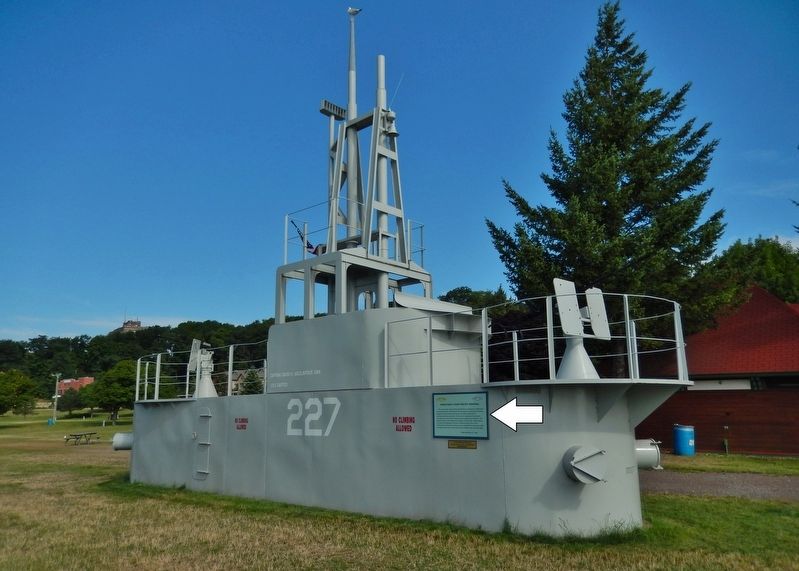 Click or scan to see
this page online
W. Marker is in Marquette, Michigan, in Marquette County. Memorial can be reached from North Lakeshore Boulevard, 0.2 miles east of East Washington Street, on the right when traveling east. Marker and memorial are located in Ellwood A. Mattson Lower Harbor Park, near the southwest corner of the marina parking lot. Touch for map. Marker is at or near this postal address: 200 North Lakeshore Boulevard, Marquette MI 49855, United States of America. Touch for directions.

Also see . . .
1. USS Darter (SS-227). In an outstanding performance of duty, which was to award both submarines the Navy Unit Commendation and Darter's commanding officer, David Hayward McClintock, the Navy Cross, Darter and Dace made contact with the Japanese Center Force approaching Palawan Passage on 23 October. (Submitted on August 2, 2020, by Cosmos Mariner of Cape Canaveral, Florida.)

2. USS Dace (SS-247). Since the location of this Japanese force had been unknown for several days, the contact report was significant. The two submarines closed the task force, and Darter attacked first, sinking Atago and damaging Takao. Dace followed with a torpedo attack that sank Maya, then went deep to avoid counterattacking destroyers. (Submitted on August 2, 2020, by Cosmos Mariner of Cape Canaveral, Florida.) 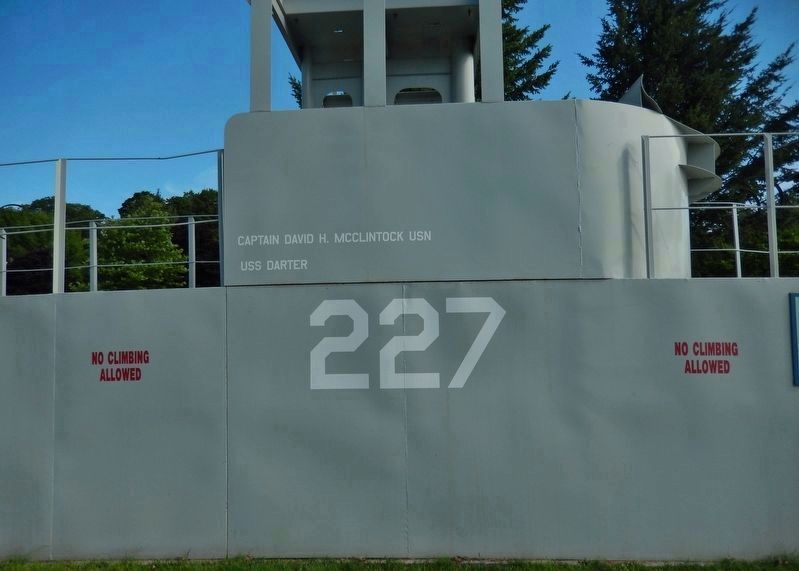 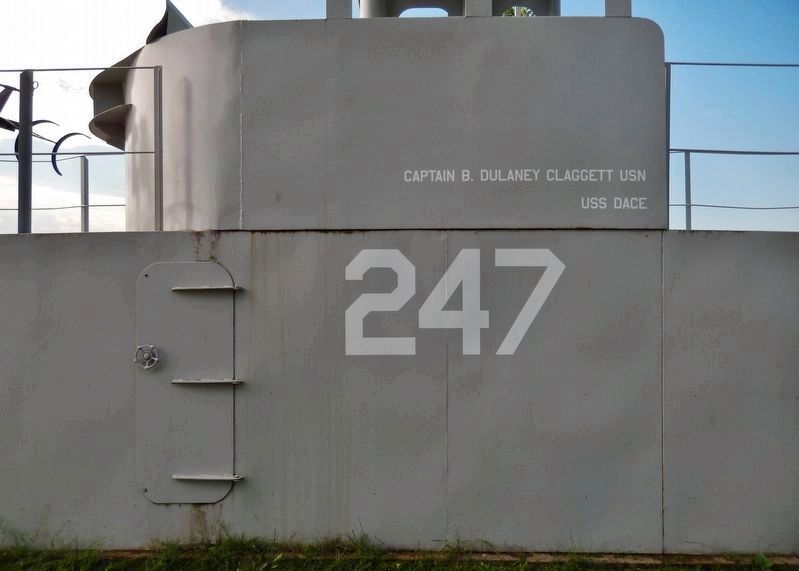 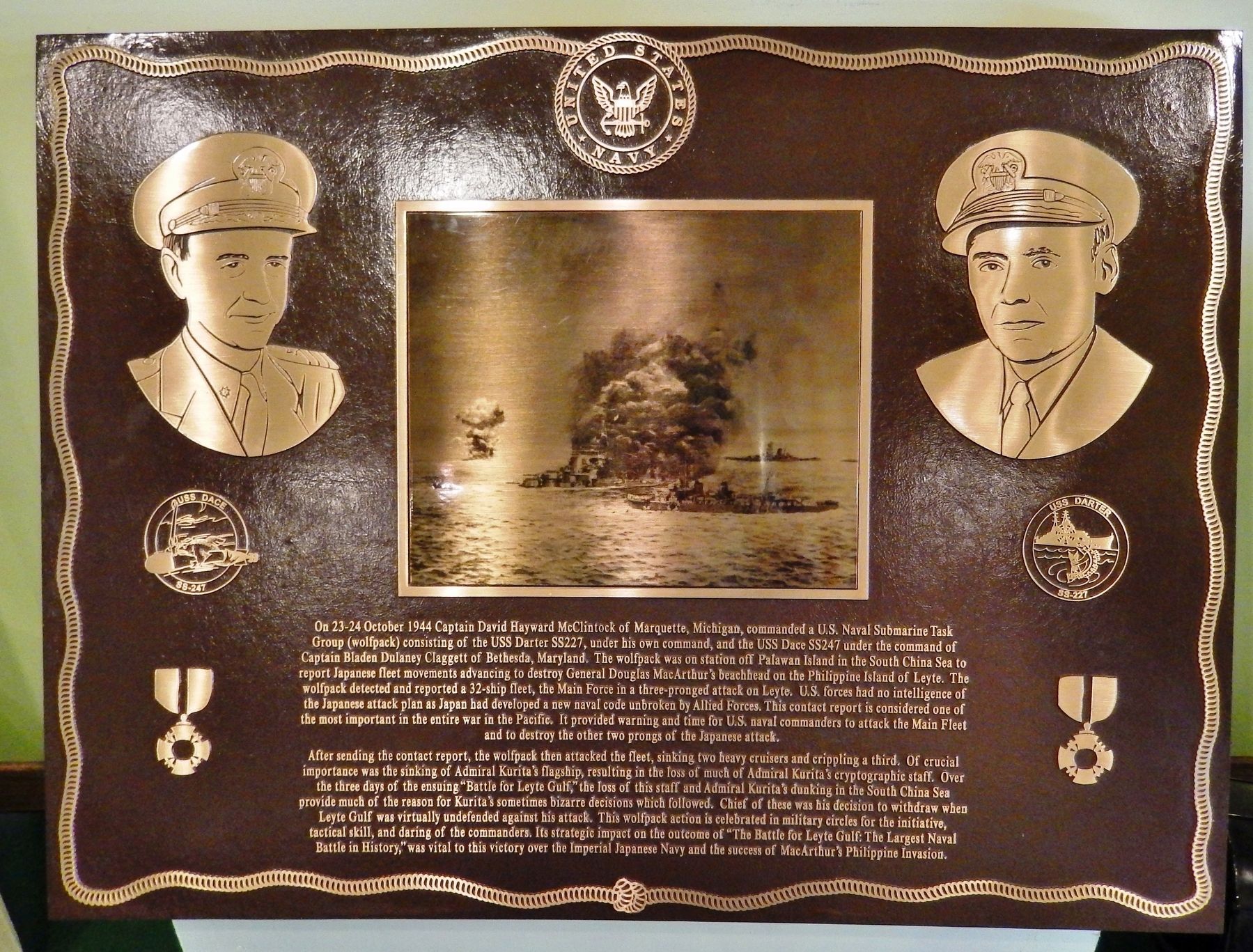 Photographed By Cosmos Mariner, August 1, 2017
5. Battle for Leyte Gulf Memorial Plaque
(on exhibit inside nearby Marquette Maritime Museum)
On 23-24 October 1944 Captain David Hayward McClintock of Marquette, Michigan, commanded a U.S. Naval Submarine Task Group (wolfpack) consisting of the USS Darter SS227, under his own command, and the USS Dace SS247 under the command of Captain Bladen Dulaney Claggett of Bethesda, Maryland. The wolfpack was on station off Palawan Island in the South China Sea to report Japanese fleet movements advancing to destroy General Douglas MacArthur's beachhead on the Philippine Island of Leyte. The wolfpack detected and reported a 32-ship fleet, the Main Force in a three-pronged attack on Leyte. U.S. forces had no intelligence of the Japanese attack plan as Japan had developed a new naval code unbroken by Allied Forces. This contact report is considered one of the most important in the entire war in the Pacific. It provided warning and time for U.S. naval commanders to attack the Main Fleet and to destroy the other two prongs of the Japanese attack.

After sending the contact report, the wolfpack then attacked the fleet, sinking two heavy cruisers and crippling a third. Of crucial importance was the sinking of Admiral Kurita's flagship, resulting in the loss of much of Admiral Kurita's cryptographic staff. Over the three days of the ensuing "Battle for Leyte Gulf," the loss of this staff and Admiral Kurita's dunking in the South China Sea provide much of the reason for Kurita's sometimes bizarre decisions which followed. Chief of these was his decision to withdraw when Leyte Gulf was virtually undefended against his attack. This wolfpack action is celebrated in military circles for the initiative, tactical skill, and daring of the commanders. Its strategic impact on the outcome of "The Battle for Leyte Gulf: The Largest Naval Battle in History," was vital to this victory over the Imperial Japanese Navy and the success of MacArthur's Philippine Invasion. 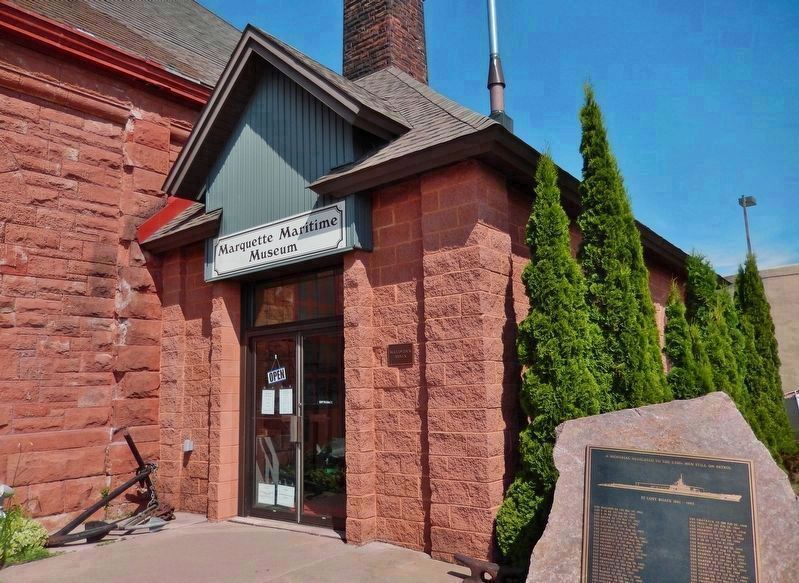 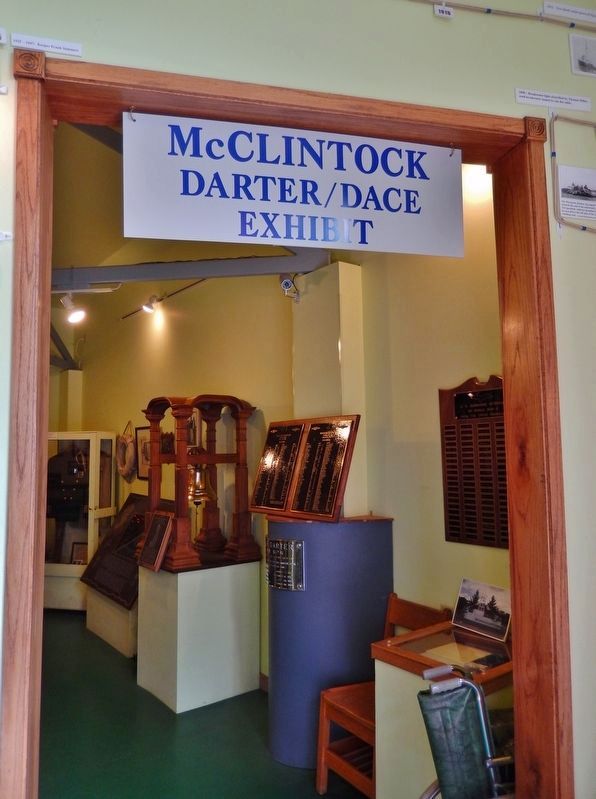 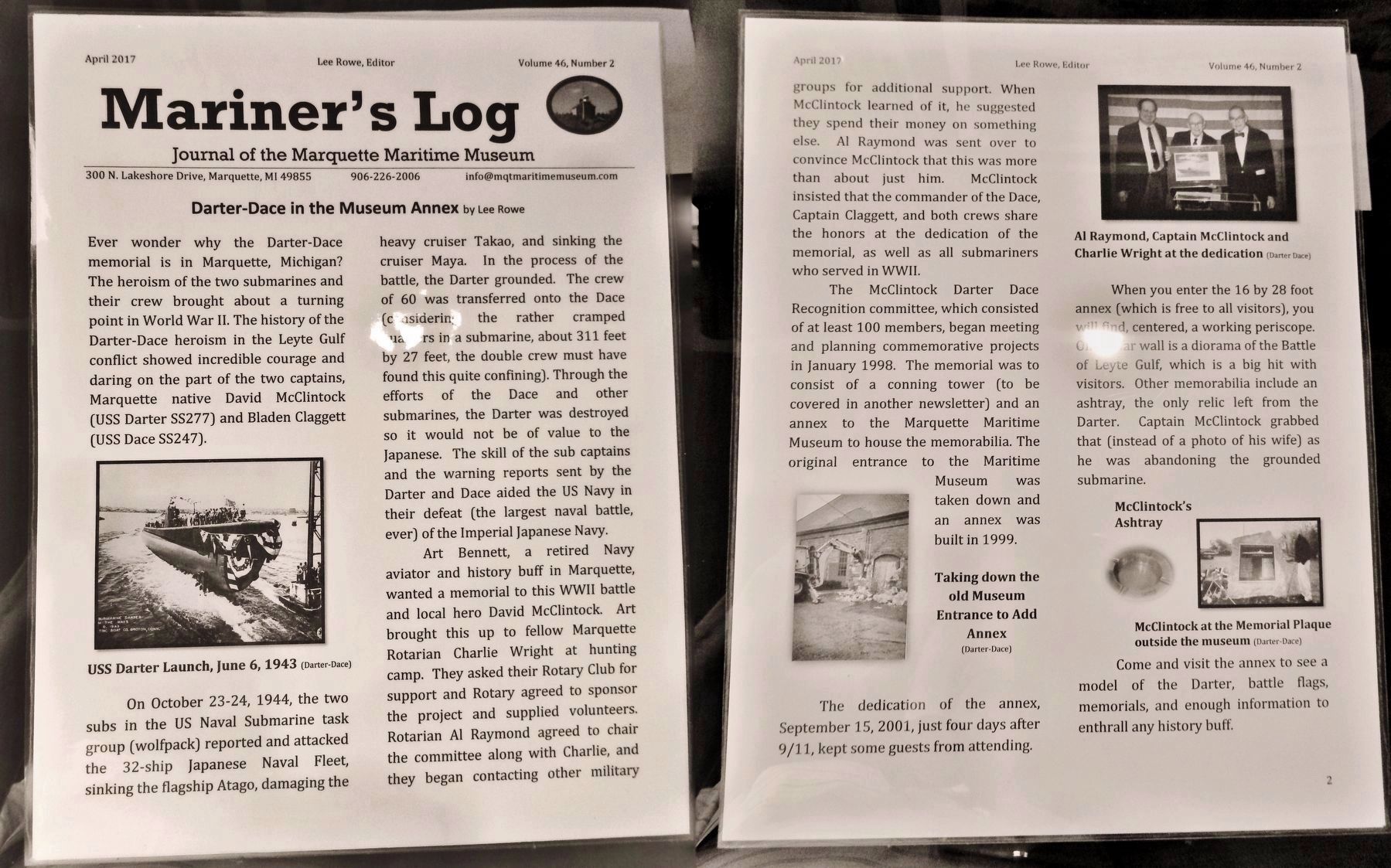 Photographed By Cosmos Mariner, August 1, 2017
8. Darter-Dace in the Museum Annex, by Lee Rowe
(on exhibit inside nearby Marquette Maritime Museum)

April 2017 • Lee Rowe, Editor • Volume 46, Number 2
Mariner's Log
Journal of the Marquette Maritime Museum
Ever wonder why the Darter-Dace memorial is in Marquette, Michigan? The heroism of the two submarines and their crew brought about a turning point in World War II. The history of the Darter-Dace heroism in the Leyte Gulf conflict showed incredible courage and daring on the part of the two captains, Marquette native David McClintock (USS Darter SS277) and Bladen Claggett (USS Dace SS247).

On October 23-24, 1944, the two subs in the US Naval Submarine task group (wolfpack) reported and attacked the 32-ship Japanese Naval Fleet, sinking the flagship Atago, damaging the heavy cruiser Takao, and sinking the cruiser Maya. In the process of the battle, the Darter grounded. The crew of 60 was transferred onto the Dace (considering the rather cramped quarters in a submarine, about 311 feet by 27 feet, the double crew must have found this quite confining). Through the efforts of the Dace and other submarines, the Darter was destroyed so it would not be of value to the Japanese. The skill of the sub captains and the warning reports sent by the Darter and Dace aided the US Navy in their defeat (the largest naval battle, ever) of the Imperial Japanese Navy.

Art Bennett, a retired Navy aviator and history buff in Marquette, wanted a memorial to this WWII battle and local hero David McClintock. Art brought this up to fellow Marquette Rotarian Charlie Wright at hunting camp. They asked their Rotary Club for support and Rotary agreed to sponsor the project and supplied volunteers. Rotarian Al Raymond agreed to chair the committee along with Charlie, and they began contacting other military groups for additional support. When McClintock learned of it, he suggested they spend their money on something else. Al Raymond was sent over to convince McClintock that this was more than about just him. McClintock insisted that the commander of the Dace, Captain Claggett, and both crews share the honors at the dedication of the memorial, as well as all submariners who served in WWII.

The McClintock Darter Dace Recognition committee, which consisted of at least 100 members, began meeting and planning commemorative projects in January 1998. The memorial was to consist of a conning tower (to be covered in another newsletter) and an annex to the Marquette Maritime Museum to house the memorabilia. The original entrance to the Maritime Museum was taken down and an annex was built in 1999.

The dedication of the annex, September 15, 2001, just four days after 9/11, kept some guests from attending.

When you enter the 16 by 28 foot annex (which is free to all visitors), you will find, centered, a working periscope. On the wall is a diorama of the Battle of Leyte Gulf, which is a big hit with visitors. Other memorabilia include an ashtray, the only relic left from the Darter. Captain McClintock grabbed that (instead of a photo of his wife) as he was abandoning the grounded submarine. Come and visit the annex to see a model of the Darter, battle flags, memorials, and enough information to enthrall any history buff.