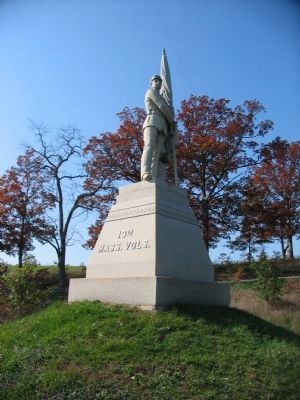 Location. 39° 50.568′ N, 77° 14.47′ W. Marker is in Cumberland Township, Pennsylvania, in Adams County. Memorial is on Robinson Avenue, on the left when traveling north. Located in the Oak Ridge section of Gettysburg National Military Park. Touch for map. Marker is in this post office area: Gettysburg PA 17325, United States of America. Touch for directions. 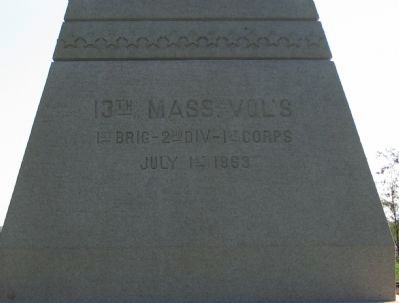 Photographed By Craig Swain, November 1, 2008
2. Back of Monument 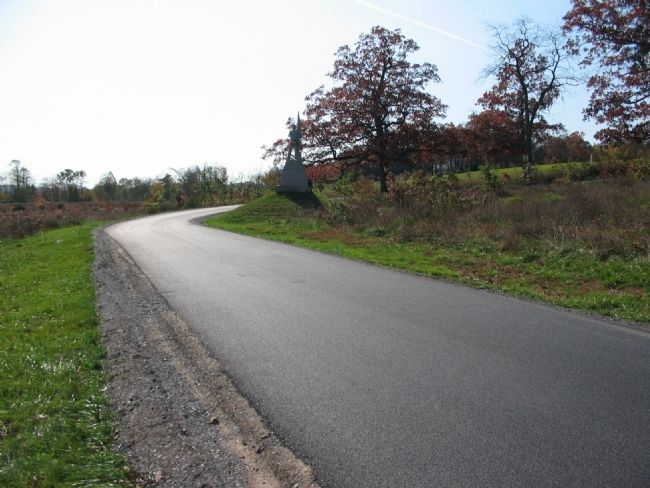 Photographed By Craig Swain, November 1, 2008
3. 13th Massachusetts on a Refuse Line
Looking on Robinson Avenue to the south at the monument. When Paul's Brigade first came on line, the 104th New York and 13th Massachusetts were placed on an extended "refuse" on the east side of Oak Ridge. The 13th was the right most unit of the line at that point, and linked in with the Eleventh Corps, which was then moving up from Gettysburg. The skirmish line of the 45th New York, of Schimmelfenning's Brigade from the Eleventh Corps based their left flank on the Mummasburg Road (behind the camera). A nearby position marker for the 45th New York indicates that unit's position.
Credits. This page was last revised on October 13, 2021. It was originally submitted on January 19, 2009, by Craig Swain of Leesburg, Virginia. This page has been viewed 1,487 times since then and 31 times this year. Photos:   1, 2, 3. submitted on January 19, 2009, by Craig Swain of Leesburg, Virginia.
Share this page.