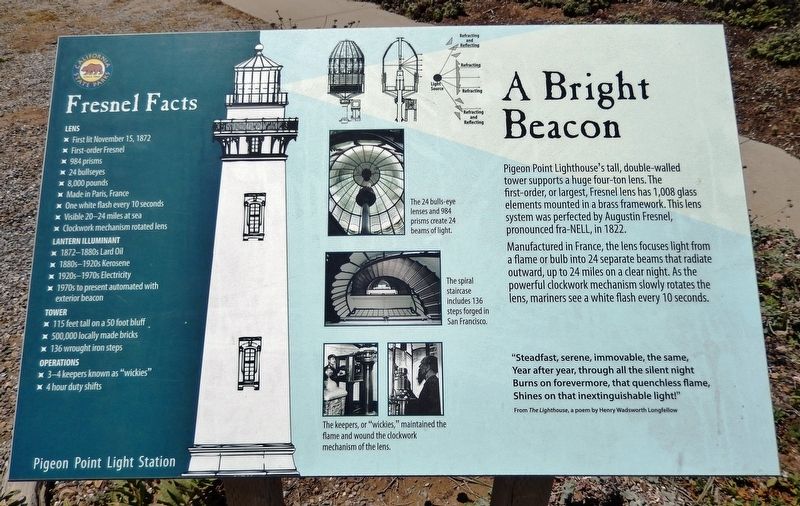 Manufactured in France, the lens focuses light from a flame or bulb into 24 separate beams that radiate outward, up to 24 miles on a clear night. As the powerful clockwork mechanism slowly rotates the lens, mariners see a white flash every 10 seconds.

"Steadfast, serene, immovable, the same,
Year after year, through all the silent night
Burns on forevermore, that quenchless flame,
Shines on that inextinguishable light!"
From The Lighthouse, a poem by Henry Wadsworth Longfellow

(photo captions)
• The 24 bulls-eye lenses and 984 prisms create 24 beams of light.
• The spiral staircase includes 136 steps forged in San Francisco.
• The keepers, or "wickies," maintained the flame and wound the clockwork mechanism of the lens. 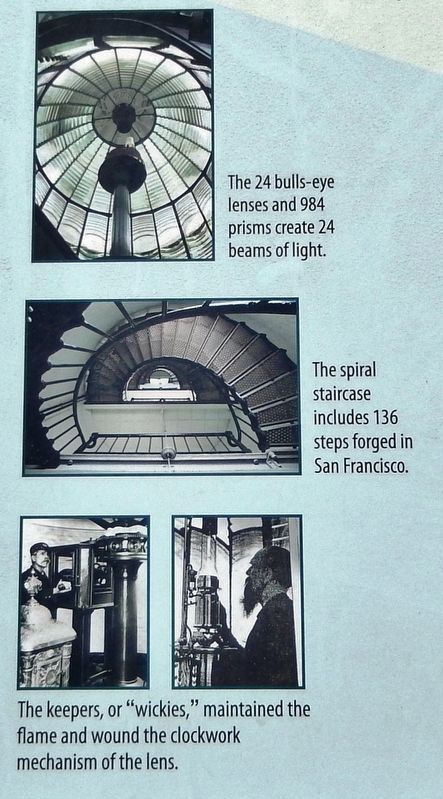 Topics and series. This historical marker is listed in these topic lists: Architecture • Parks & Recreational Areas • Waterways & Vessels. In addition, it is included in the California Historical Landmarks, and the Lighthouses series lists. A significant historical date for this entry is November 15, 1872.

Location. 37° 10.923′ N, 122° 23.633′ W. Marker is near Pescadero, California, in San Mateo County. Marker can be reached from Pigeon Point Road, 0.2 miles west of Cabrillo Highway (State Route 1). Marker is located within Pigeon Point Light Station State Historic Park, overlooking the lighthouse from its east side. Touch for map. Marker is at or near this postal address: 210 Pigeon Point Road, Pescadero CA 94060, United States of America. Touch for directions.

Other nearby markers. At least 8 other markers are within 5 miles of this marker, measured as the crow flies. Light Up the Future (here, next to this marker); Savage Seas (within shouting distance 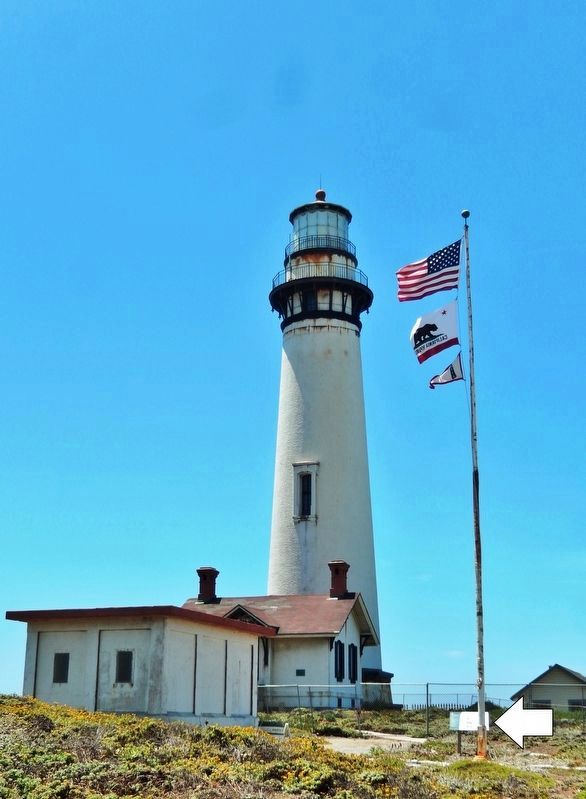 Related markers. Click here for a list of markers that are related to this marker. Pigeon Point Light Station

Also see . . .
1. Pigeon Point Light Station (Wikipedia). The tower stands on a rocky promontory and has long been a landmark for ships approaching San Francisco Bay from the south. This headland, and hence the lighthouse, took its name from the ship Carrier Pigeon that wrecked here in 1853. (Submitted on August 27, 2020, by Cosmos Mariner of Cape Canaveral, Florida.) 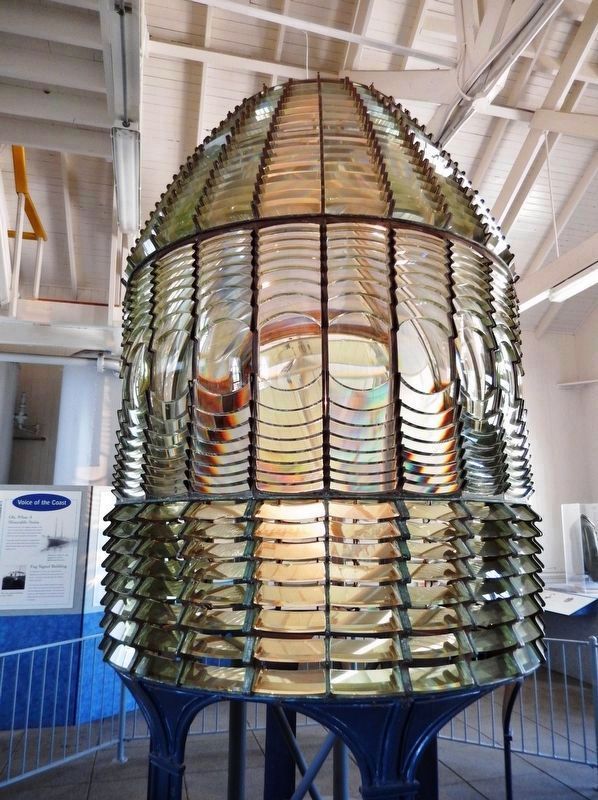 2. Pigeon Point Light Station State Historic Park. Perched on a cliff on the central California coast, 50 miles south of San Francisco, the 115-foot Pigeon Point Lighthouse, one of the tallest lighthouses in America, has been guiding mariners since 1872. (Submitted on August 27, 2020, by Cosmos Mariner of Cape Canaveral, Florida.)

Photographed By Cosmos Mariner, June 19, 2015
5. Enduring Sentinel
(interpretive panel inside Fog Signal Building)
The Cape Hatteras Connection
Pigeon Point's first-order Fresnel lens has faithfully guided mariners past these shores since 1872. Manufactured by Henry-Lepaute in Paris, the lens began service in 1863 as the replacement lens in the original lighthouse at Cape Hatteras, North Carolina during the Civil War.

When a new tower was built at Cape Hatteras in 1870, the lens was removed and stored briefly at the Staten Island, New York Lighthouse Depot before being shipped in 72 crates around Cape Horn to Pigeon Point.

Weathering storms, witnessing disastrous shipwrecks, and even surviving the earthquakes of 1906 and 1989, this beacon has aided many a ship to safe harbor.

(photo captions)
• This lens first served in the original Cape Hatteras Lighthouse from 1863-1870.
• The 1,008 prisms and lenses light the way for mariners.
• Pigeon Point has guided mariners to safe harbor since 1872. 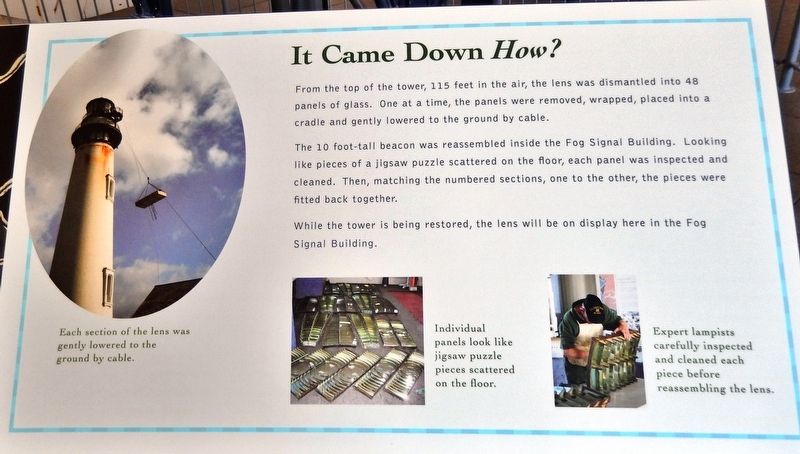 Photographed By Cosmos Mariner, June 19, 2015
6. It Came Down How?
(interpretive panel inside Fog Signal Building)
From the top of the tower, 115 feet in the air, the lens was dismantled into 48 panels of glass. One at a time, the panels were removed, wrapped, placed into a cradle and gently lowered to the ground by cable.

The 10 foot-tall beacon was reassembled inside the Fog Signal Building. Looking like pieces of a jigsaw puzzle scattered on the floor, each panel was inspected and cleaned. Then, matching the numbered sections, one to the other, the pieces were fitted back together.

While the tower is being restored, the lens will be on display here in the Fog Signal Building.

(photo captions)
• Each section of the lens was gently lowered to the ground by cable.
• Individual panels look like jigsaw puzzle pieces scattered on the floor.
• Expert lampists carefully inspected and cleaned each piece before reassembling the lens. 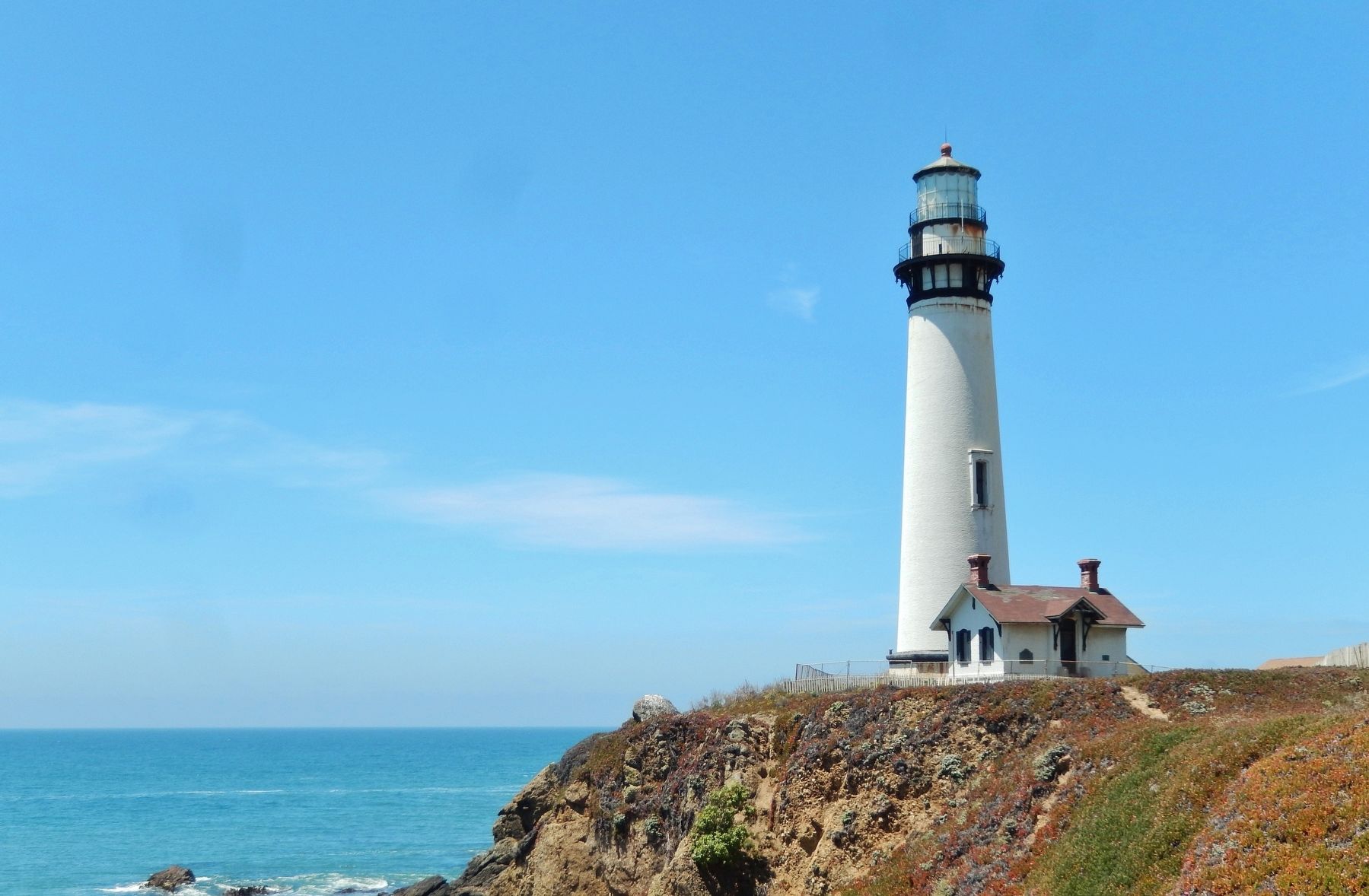