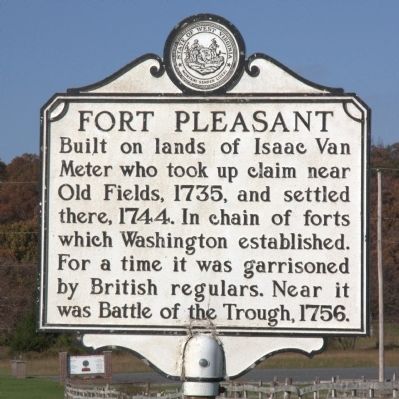 Photographed By J. J. Prats, October 22, 2011
1. Fort Pleasant Marker
Inscription.
Fort Pleasant. . Built on lands of Issac Van Meter who took up claim near Old Fields, 1735, and settled there, 1744. In chain of forts which Washington established. For a time it was garrisoned by British regulars. Near it was Battle of the Trough, 1756. . This historical marker is in Old Fields in Hardy County West Virginia

Built on lands of Issac Van Meter who took up claim near Old Fields, 1735, and settled there, 1744. In chain of forts which Washington established. For a time it was garrisoned by British regulars. Near it was Battle of the Trough, 1756.

Topics and series. This historical marker is listed in these topic lists: Colonial Era • Forts and Castles • Settlements & Settlers • War, French and Indian. In addition, it is included in the West Virginia Archives and History series list. A significant historical year for this entry is 1735. 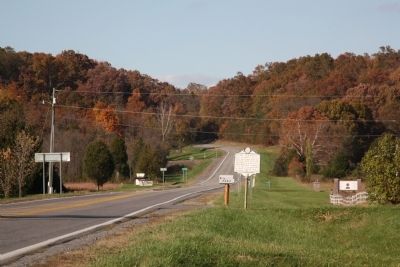 Also see . . .  Battle of the Trough. Wikipedia entry. “After the defeat of General Edward Braddock at the Battle of the Monongahela (9 July 1755), the white settlers of the Allegheny Mountains were largely unprotected from a series of Shawnee and Delaware Indian raids. In October, in an effort to provide some respite, two forts were raised in the North Branch Valley on Patterson Creek. By the end of the year, the Virginia Regiment had increased its numbers by several hundred troops and began to temporarily man some of these settler forts. Shortly after the new year, a new commander of the Regiment—the 24 year old Colonel George Washington—ordered Captain Thomas Waggener to leave Fort Cumberland with his company and proceed up the South Branch. His orders directed him to construct two forts in the area above the rugged gorge known locally as ‘The Trough’ and to station detachments accordingly to best protect the settlers on the upper South Branch.

“That spring of 1756, a pair of Indians, a remnant of a party recently defeated (along with their French captain) by a Capt. Jeremiah Smith at the head of the Capon (Cacapon) River, were passing through the upper South Branch (somewhere near the present site of Cabins, West Virginia) when they encountered two white women. One of these (a Mrs. Brake) they killed and the other (a Mrs. Neff) they took prisoner. The party then proceeded to the vicinity of Fort Pleasant (at present day Old Fields and the lowermost of Waggener’s two forts) where they encamped. That night Neff escaped and fled to the fort. ... ” (Submitted on October 30, 2011.)
Credits. This page was last revised on August 31, 2020. It was originally submitted on October 30, 2011, by J. J. Prats of Powell, Ohio. This page has been viewed 838 times since then and 64 times this year. Last updated on August 30, 2020, by Bradley Owen of Morgantown, West Virginia. Photos:   1, 2. submitted on October 30, 2011, by J. J. Prats of Powell, Ohio. • Devry Becker Jones was the editor who published this page.
Share this page.